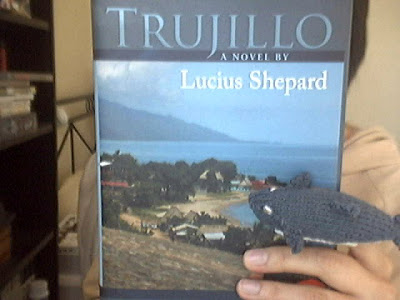 SHARK! SHARK! THERE'S A SHARK IN THE WATER.

The only other book of Shepard's I've read is Viator, which I adored despite it unraveling at the end. When reading this, I found myself coming over with pretty much the same obsessive behaviours, it being a book I would sneak sips of at work and devour on the train and at home. It didn't last long at all.

The story largely follows Dr Arturo Ochoa, semi-retired and coming home from a very unsettling patient to an equally unsettling daughter who is doing what daughters do, ie, asserting her independence. The patient, Stearns, a privileged ex-pat, is under suspicion of murder with only amnesia muddying the waters, and is not particularly concerned about this.

Slowly blossoming is a strain of something decidedly other influencing events, and this, I believe, is what I get captivated in. A precise degree of mystery with an equally precise level of menace. A mystery that you're forced to create for yourself before you can even start attempting to solve it, and after you've put all that work in identifying the mystery, well, why undo that by solving it anyway? The world is better with patches of the inexplicable included.

I did come out of it wondering at the massive divide between men and woman that existed between. That's purely subjective on my part, I tend to go through life paying no attention to any socially-perceived differences in place/role/whatever between the genders. There is a difference, it's naive of me to act as though there isn't...but it isn't always a bloody war.

Verdict: Shepard is an amazing writer, seriously just gobsmackingly amazing.
Posted by Tessa at 6:51 am