While I was Not Typing my writerly achievements went up a couple of levels. Here is my horn. Lo! I blow it!

The flash fiction anthology edited by VanderMeer Inc with SJ Chambers riding shotgun was launched at this year's World Fantasy. Some 20+ of the 70+ contributors were present, the 'Bird of Paradise' cocktail was most delicious, and there was cake. There, I had the slightly disconcerting experience of being recognised despite some covert attempts at stealth. 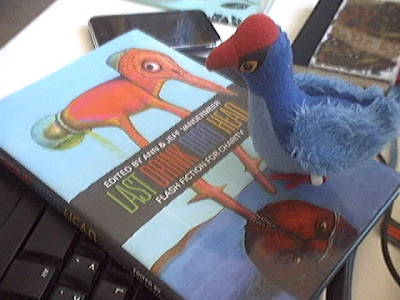 (The wind-up Pukeko is totally checking out that bird's pins.)

It is a beautiful book. Without a doubt the prettiest book I've had the honour of sneaking aboard. That sumptuous dust jacket hides an elegant embossing on the cover, and dude, Dude, DUDE, DUDE IT IS A FLIP BOOK. Get your hands on a copy an flip the bottom corner of the book. Yes! How unbelievably splendiforous! That's another tick on my list of Things To Do Before Dying.

The collection of authors contained is fantastic, and the variety in the approaches taken to the theme keeps them fresh. Very fond of Ben Peek's and Drew Rhys White's pieces.

Oh frabjous day! Calloo! Callay! The behemoth collaboration that nearly killed Jeff Fucking VanderMeer and I is finally out in the wild, and now I can stop thinking about it, other than to ponder how many subtitles can a book have? I don't know that I can approve of more than one colon being present in a title.

Below, the Masterchief, Middlechief and Minichief are demonstrating exactly what I mean when I say 'behemoth'. 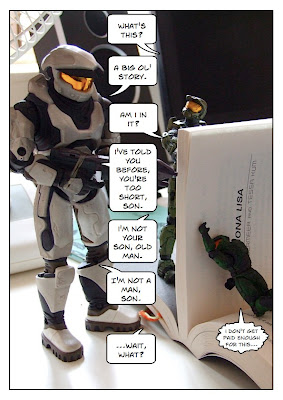 As a relatively under-exposed writer with little output, the thought of being read, and I mean really read by a whole lot of people who are picking up the book because they choose to and not because they know any of the contributors and certainly don't give a crap about the sensitive egos of the delicate writers responsible for the tome, the experience has been not quite the same as, yet still quite similar to, nerve torture. There's nothing more rewarding or exciting than having your little behemoth read, but holy crap it's traumatic.

At any rate, The Mona Lisa appears to be largely well received. Phew? Phew. (I have no idea how Jeff does this.)

Excuse me a moment to have a not-so-little and self-indulgent squee: I mentioned in passing that one character, Henry, was a hill I was prepared to die on, 'cause dammit Henry is awesome and no editors or canon-police were going to get in the way of that awesome.

And he is awesome. In fact, he is so awesome that someone made him his very own page on the Halo Wikipedia.

(Which unfortunately spoils the entire plot, so if you intend to read the story, don't click that link.)