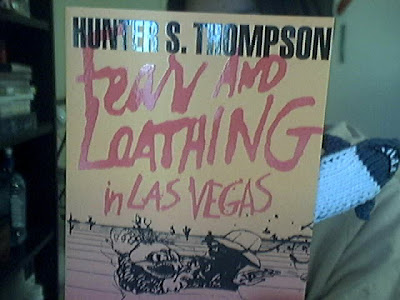 I've had a couple of glasses of lemonade and something to eat now, feeling a little less monstrous.

I remember reading this at a backpackers down in Apollo Bay, and being asked by the various people witness to me reading exactly what the book was, because I was laughing so much. In all I've heard of the Beat writers, I don't think anyone's ever told me they were a bunch of comedians. Absurdism just runs to my taste.

Having not seen the movie I had no idea what to expect, and now I think of it, I can't remember what prompted me to pick the book up at all. Glad I did, regardless. It hilarious and appalling, following the Duke and his 'lawyer' through several drug-saturated mayhem-infested days in Las Vegas, covering a motorcycle race, a narcotics conference, and several hotel rooms in shit. The two of them stagger from calamity of calamity and bluff their way out of a ridiculous amount of disasters and...you know, reading it made me never want to go near drugs. Ever. That is an alarming world to move through. Perfect for watching other people traverse.

What has stayed with me since reading is a single scene, with the two of them sitting in a diner and telling the waitress they're looking for "the American Dream" and the conversation that follows seeing them given haphazard instructions to what has become a bar? club? called the Psychiatrist's Lounge or similar. The whole 204 pages of the story serves to give this scene the context it requires to be heard.