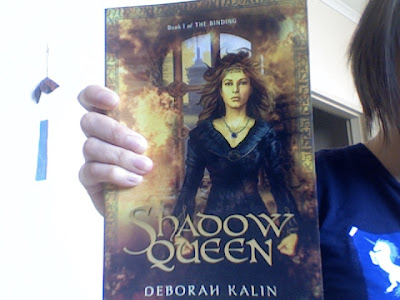 Again, it's hard to form a structured opinion of this book because a) I critiqued it when it was just a wee manuscript in Courier New, and b) I adore this book so much I tend to start frothing in the mouth when I talk about it, and c) Deb reads this, and I know Deb reads this, and thus I'm more than tempted to say outrageous things just to mess with her.

(Hi Deb! You know, if you're reading this, it means you're not working on the edits for book 2. GET BACK TO WORK, WOMAN.)

Also, I'm not sure how to speak of it without incurring the wrath of the Spoiler Police (for whom I do volunteer work). Matilde is heir in waiting, and on the eve of what should see her ratified as ruler, unknown armed forces invade and KILL EVERYONE.

And so the story begins.

AND IT IS OOOOARSUM. The first time I read it I was yelling out loud, which I can't say I do often. Matilde is a brilliantly realised, she survives the night's massacre by utilising her wits in a move that is genius and madness and so unexpected that every time I reread it, I still crow in admiration.

The set up is such that she could be some sort of super magical "chosen one", but this book is unique among its fantasy counterparts in the furious use of quick thinking, odds-playing and political maneuvering above all other methods of progression. The fantasy elements contained in the world are not unrightly dealt with as any other possible political complication is dealt with, and not kept apart from the world people live in and through.