Ghost in the Shell 2: Innocence 'After The Long Goodbye' - by Masaki Yamada, trans by Yuji Oniki and Carl Custav Horn 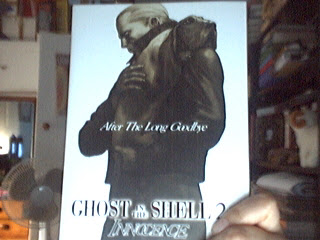 Summary: Batou lost his dog. Batou looks for his dog.

I picked this up because it was by a different author than this tie-in, the amazon reviews actually sounded interesting, and, er, it was a pretty book. Shuddup.

And this book blindsided me. It's heart-breaking and thought-provoking and well-written, and not at all what I was expecting. The translation was excellent. Everything was good quality. Whe the...?

There was a bit of character suicide going on - Batou is a mopey bastard through the whole thing. He has his emo ON. This is not a happy, chipper, feel good sort of book. It's what you read when you're feeling lonely and miserable, so you can be lonely and miserable with a lonely and miserable book. Part of me wanted to mock him for having his whole life revolve around his dog, but then, pot, kettle, black.

The dog, the absence of dog, is almost incidental to what the book is actually about, which is consciousness. Memories. What it is to be aware. Aware, within a synthetic environment, and everything that is gained and lost. That he can program himself to release endorphins when accessing a certain memory - does that mean the memory makes him happy, or he makes the memory happy? What is happy?

There is a fair whack of giant tanks and super-cyborg gun fight spectacular-a-rama, but such things in no way subtract from the gravitas of the underlying themes.

I was surprised, and lonely and miserable, and this book rang true.

Verdict: knowledge of the GIS universe will help, but this remains a startlingly good book regardless.
Posted by Tessa at 7:47 am No comments: 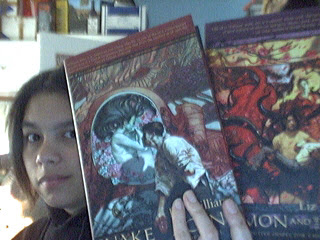 This might be cheating, lumping the two books together, but my thoughts on each are pretty much the same.

Williams has created a very tasty work, set in future Singapore Three, in which technology has eased the communication between Hell and Heaven, and people such as Detective Inspector Chen exist to investigate crimes of the celestial sort. It's a textured world, full of flavour, and left me with severe cravings for congee and noodles.

In Snake Agent, Chen is called in to investigate some soul-smuggling, runs into the demon Zhu Izrh (who is terribly easy to crush on), and generally discovers that Terrible Things Are Afoot In Hell, and must save the day.

In The Demon and The City, Zhu Irzh is not requested to investigate the murder of a socialite, but does so anyway, and eventually he and Chen uncover a plot that will shake the earth, Heaven and Hell, and must save the day. Again. Clearly they don't get paid enough.

Both books are brilliant, juicy, cop stories, with characters that I just adore (I have a great fondness for the badger-teakettle), and I can't help feel sorry for everything Singapore gets put through.

That said, I found that both books started as one thing, and transformed greatly, ending as an almost entirely different book. This in itself wasn't a problem, except that I didn't get a feel that the transition was acknowledged, when reading the final pages. What happened to so and so, and what about such and such? Life doesn't tend to tie itself up in neat little packages, but I like some balance in my books.

There's a third book in the works, and I will most definitely be acquiring it. You know how it is. Find a food you like; eat it.

Verdict: Well worth checking out, especially if you'd like a taste of something different.

(I know these write ups are short and crappy. I am hungover and have a sore throat. Just think of all the whinging I'm NOT doing.)
Posted by Tessa at 7:28 am 4 comments: 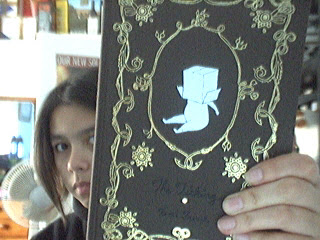 Just look at how beautiful that book is. Cloth-bound and embossed. I'm a shallow, shallow person, and I admit, I bought it just because it was lovely. I pick it up every now and then, just to hold it, and touch the cover.

This is not a graphic novel. 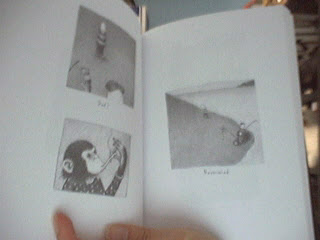 It's a picture book.

Edison Steelhead was born looking like his father, and so his father takes him away to live on an island, where no one can see them. Edison grows up as all children do, curious and questioning, and not entirely accepting of his father's own issues. Their ability and inability to be ashamed, unashamed of their appearance draws them further apart, in this quiet, soft, greylead world.

There is so much space on the pages, each picture a little window surrounded by white, as if I was only getting the slightest, cropped glimpse of the world they inhabit. I couldn't help feeling each picture was being forced to sit in the corner, ashamed of the attention it gained by being present.

All that soft pencil is marvellously printed, to the point I was afraid of brushing my fingers across each page, lest I accidently smudge the art. 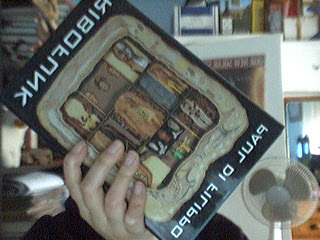 I have had this sitting on my shelf for years. You see what treasure I have just lying around in my room, and I don't even know it? Who's the ijit? ME.

I chose it as I'm still on this run of "small and easy to carry", which isn't the greatest reason to pick up a book, but didn't fail me this time.

Ribofunk is awesome. AWE-SOME. It isn't cyberpunk, not in the traditional sense. There's a lot more funk, for starters. Oodles more funk. So much funk it's off the funkitude scale.

While there is a sort-of over-arching story to the book, it presents as a collection of short stories, sometimes related, sometimes not. I suppose you could read them at random, but the information presented in one lays the groundwork for the next, so perhaps it would be better to treat them as chapters that aren't closely related. Sort of second-cousins meeting at the family christmas dinner.

Di Filippo has created a world which...

It's a future in which the focus is less on computers, and more on body manipulation. Tropes and splices, anything can be injected now, from moods to knowledge to horns. I didn't pick up much body horror, but some of the modifications were confronting, to say the least. People chosing to augment their bodies to become more like cockroaches, or cliched chain-mail bikini-clad barbarian women, and splices themselves, part human, part anything else you want DNA. What does it mean to be human? Does it matter?

But Di Filippo doesn't just create a funkified future, or rewrite the syntax of science-fiction (I can't say that without cackling), he makes his own genre and language, and leaves the rest of us staring in puzzlement at his frollicks. I admit, I read the first page about five times before giving up trying to decipher the lingo and just running with it. It's a great, great language. Read it, and learn.

My favourite chapter/story has to be Big Eater, a story told entirely from the point of view of a man who had a broadcasting accident, and when stressed, sick, or having just woken up, can only express himself in rhymes.

The wordbird woke me at seven out of my heaven. Not at all synthetic, just the old deltawave-syncretic. Rem-memories hazed my gaze. Just like a screamcurse, I seemed stuck in my dreamverse. Though it wasn't so bad, maybe even triple-gonad. Something about drifting forever down a river of feathers. On my back, I was catching up on my slack. Coasting along just humming a song. Mighty nice change from my strife-life brain-drain. Which the nerdbird was still harp-harp-hopping on.

You know. The sort of thing that makes me grin because it's silly and awesome. 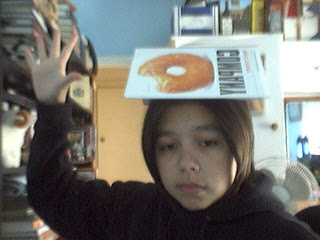 Read this a couple of months ago. Yeah, you'd think I'd have learned not to leave it so long by now.

Jennifer Government had me in stitches with it's bleak, absurd and dark humour, and so I had the same expectations of Company. I wasn't disappointed.

This book follows Jones, a graduate just starting a job in Zephyr, and the differences encountered between what is taught in business school, and what actually goes on in the work place, among a myraid of other things. It focuses on the mundane, ordinary, trivial things that nevertheless become great drama in the work place. If you've worked in an office, you know what I mean. I consider my own office pretty tame, and still this book resonated strongly.

Despite being pretty much non-stop giggles, it is a disturbing book, precisely because it resonates. You know, truth, and all that. The potrayal of Senior Management in particular (being representative for all upper echelons of management in every company anywhere) was frighteningly close to the bone, and highlights, quite starkly, the distance between those who make the decisions, and those who do the work.

I would love to go into more detail, as Company provided all sorts of food for pondering, but there are things that I just don't want to spoil.

That said, this book won't be a laugh for everyone. I pushed this on mum, as her office is being 'reorganised', figuring she'd need to laugh at the situation. Unfortunately, her reaction was the opposite; she couldn't read it because it was ridiculous and unfunnily true. Art mirroring life mirroring stupidity.

Verdict: Terribly funny stuff. If you are in a management position of any sort, you should read this. It will make your staff like you more. Also, it makes a good hat.
Posted by Tessa at 2:51 am No comments:

When I woke up half-way through the afternoon, I was crying. I can't remember the dream, but I know it wasn't the cause.