Before the hashtag, there was 'Acception'.

'Acception' was solicited by Gillian Polack, who was specifically hunting stories dealing with cultural baggage. Being equal parts immigrant and coloniser in a colonised land, it was very much a theme close to my heart.

I honestly don't remember how the story transitioned from a partial drafs with all the excitement of a damp hanky to the version that went to print. In fact, I don't really remember writing this story at all. I edited it. It required (and because writers can never let alone I think it still requires) editing. Perhaps it is what others mean when they say a story came through them; not from them.

Baggage has had a turbulent life as a book, and after much heartbreak and man obstacles, it has finally returned. 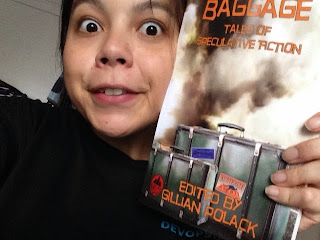 The Post-Hashtag audience may be amused to know that the story I wrote takes place during the coming revolution, which takes place in Melbourne, the protagonist of which is Tessa Kum. Yeah, I really did that. Hero Complex out the wooza except not really.

The Before-Hashtag audience I daresay may be relieved that the hashtag didn't pan out like the story did. Funny. Even after all these years, this story is still precious to me. I'm not sure I could or even would write that narrative again, but being written I find myself returning to it. Perhaps because the story says something I needed to hear, and still need to hear.

There are also some marvellous pieces in this collection. Stand outs for me are the stories by KJ Bishop, Yaritji Green and Monica Carroll. Excellent tasty stuff.

Baggage can be bought as paperback or ebook.

For that matter, 'The Fate of All Wens' is available as an ebook together with 'By the Moon's Good Grace' by Kirstyn McDermott in Volume 12: Issue 3 of the Review of Australian Fiction. McDermott's story is current shortlisted for a Ditmar, so you don't just have to take my word for it when I say it is an incredible, powerful piece of work. $2.99AUD for two stories is pretty excellent. That's less than a fancy cup of tea and you get owlbears and wolves and all sorts of lovely words and images and perhaps some not so lovely ones too, all of them so worthwhile.

Tangentially, the Triumvirate over at the Galactic Suburbia podcast have named myself as well as Anita Sarkeesian, Zoe Quinn and Brianna Wu tie winners for the Julia Gillard Award of sort of general feminist badassery. The Galactic Surburbia award for activism in SFF goes to Sofia Samatar for her awesome acceptance speech calling out the elephant in the roof: Lovecraft's unfortunate head.

The Julia Gillard Award was named after former Australian Prime Minister Julia Gillard, in particular for this speech:

Which, look. She had some abhorrent policies, but this remains for me the greatest use parliamentary speech time EVER.