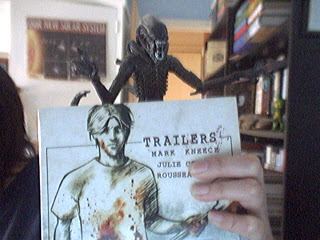 This was an impulse buy. I went shopping looking specifically for a one shot comic that wasn't about superheros, or great epic battles, or anything that wasn't the norm of life. I wanted a story that might have mabye reflected this pointless struggle I have with the mediocre humdrum of life, a story that wouldn't patronise me and wouldn't offer false hope or comfort, an ordinary story about ordinary people who don't have happy endings.

This isn't quite what I was looking for, it was better.

Josh has a shit life. He lives in a trailer with his no-good mother and three younger siblings of different fathers, and does most of the parenting, and has to deal with school, you know, school...and then his mother goes and kills her current squeeze, and he's left to deal with the body. Unfortunately, the body just won't stay buried, neither will any of the secrets, and what little control he had over his life is slipping away.

And Josh is just a teenage kid in over his head, and he doesn't have special friends, lucky breaks, convenient powers, a place to retreat to, and he isn't coping, it isn't fair, and he's angry.

And that was refreshing.

Maybe I'm looking in all the wrong places, listening to the wrong conversations, but lately, all I've seen is people doing their best to cheer others up, insist that the person in strife look on the bright side, and be grateful for what they have. Perhaps. In time, maybe.

It's not my approach, mostly because it shits me to tears when someone tries that on me. It's as though there is some unspoken rule that anger is bad. It is, but it isn't wrong. None of us like being powerless, and most of us don't accept that politely. If you want to be angry, then go, be angry. And when you've ranted and yelled and spent it all, then you can go on with life, pick up the pieces, and start again.

This is a very well written book. It's solid, full of real people who say real and stupid things, do real and stupid things, and don't cope with life. There are no clever answers, easy solutions and neat resolutions. There isn't a happy ending. But, the end is a better place than the beginning, and I think that's all we can really hope for.

Verdict: Excellent. Good, good stuff. Well crafted, in terms of writing and art. Muchly worth your time.
Posted by Tessa at 4:49 am 2 comments: 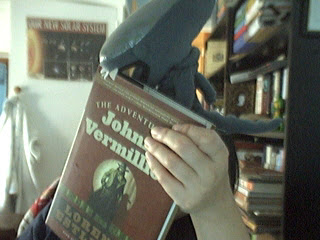 The Alien is trying to eat this lump of dead tree matter. I agree with the Alien.

You've seen it before: a succession of stoked boilers streaking towards the screen, intercut with close-ups of charging wheels and plunging drive rods. On the soundtrack, short cello strokes imitate the chomping of pistons and steam whistles blast from the brass. Depot signs loom at us from the far perspective...

And so on. And so forth. That is one of the tamer passages. I stopped before it got to the montage of robberies. There's even a travel montage in this book, you know, when there's an overlay of the map with a line moving across it to indicate the movement of characters from one place to another. Yeah. One of them. In a book.

I know I've harped on about respecting the medium you use and all that, but this just stumped me. I think I was too shocked at just how brazenly "THIS IS A MOVIE" the book was to be affronted. If you're going to do something, then do it properly, and this is a movie in an all balls out sort of way.

Still. It's a book. Not a great one at that. The title indicates that Johnny Vermillion is the centre role, but he isn't. Far more POV time is spent on his accomplices, who are far more interesting than he is. Vermillion has Mary Sue stamped all over his face. The others, while skirting the realms of cliche, are quite well drawn and the dynamic between them is terribly amusing. Together, they form a travelling theatre troupe which is really just a cover for the fact that they're bank robbers, and good at being both.

The story isn't much to speak of; they're criminals, they're in danger of getting caught by either the law or the other criminals whose toes they're stepping on. Nothing particularly new is attempted with the story, or the characters, and it rolls on pretending to be a movie so there's pretty much sweet fanny all in terms of proper climax and resolution. Mildly intriguing character conflicts are seeded, and then entirely ignored and forgotten.

It could be said that Estleman is deliberately playing with the great many cliches that Westerns are open to, but he fails to then do anything new with them. He fails to do anything with them at all. The story just...stops. There are plenty of nice elements, but they don't gel together as a whole.

Verdict: You know, I can't recommend this as fluff, because it's just...wrong.
Posted by Tessa at 4:05 am No comments:

I went to the Nine Inch Nails concert alone. Some people flip out when they discover that I willingly go to movies on my own, so I didn't advertise this. It doesn't faze me, and I've never been able to explain how experiencing something alone makes it purer.

It was brilliant. I stood in a crowd of total strangers, strangers who ignored me and expected nothing from me, totally incognito, and loved it. There was nothing for me to do, nothing to fill up my head except a gazillion decibles of industrial rage.

For some people, music is a social thing. They get together over it, talk about it, share it.

For me, it's ridiculously intensely personal, and I don't want to share it with anyone, because if they judge it, they're judging me.

Being swallowed up and made insignificant by loud music had the same calming, clensing, euphoric affect as standing alone in the mountains. I'm at my highest when the world around me makes me so small, I cease to exist, even to myself.
Posted by Tessa at 5:48 am 9 comments:

Curse of the Golden Flower

Pretty, and lacking a point. The lessons I took away from the cinema were: "when families go bad, they go BAD" and "it's GOOD to be king".

Overwhelming colour though. That palace! In the first five minutes I was saturated. How can you live in such a palace and not go insane?

Also: asian women have boobs. This film is proof.
Posted by Tessa at 6:19 am 1 comment: