I'll undo this face. I'll take it off, put it down and forget to pick it up again. Eventually, I'll forget I ever had this face, and then this face will have never existed.

I'll dismantle this name. The T and A can go to Antarctica, the two Ss to Consequences, and the E to the End.

I'll take back these encounters. I'll rip all memories of me from history. I'll tear them out of your mind with my bare hands. I'll dig my finger nails in and pull, twist, saw and wrench, until they're free, leaving jagged edges, bleeding familiarity, and leaving you gagging with déjà vu and asking, "Do I know you?"

No, you never did.
You never will.
And I make this so.

Maybe I won't make a new entity.
Maybe I'll stay anonymous, and
incognito, and
nothing.
Posted by Tessa at 10:38 pm

Automatically shipped by LoudTwitter
Posted by Tessa at 12:00 pm No comments:

"I've got a baaad feeling about this."

I spoke of fear.

I spoke of Tibet.

I've let one rule the other. I told everyone I was going to Tibet, made sure I got the leave and put money aside even though it made every day living a little lean. Did not book the trip. Thought about booking it, but always found a reason not to. Because I was afraid. Some inarticulate, irrational and soft dread that I wouldn't work my way around, even though I wanted to.

On the bus from the airport last weekend, I sat behind an older Chinese man. He had that sallow face, sagged skin and hanging depressions beneath his eyes which makes me think of my chain-smoking uncle.

The last person to board the bus was an older Caucasian woman. 'Older' in the sense that she wasn't so sure of her feet anymore, and sat down as soon as the bus started moving. Next to the Chinese man.

They started chatting right away. No hesitant customary greeting, they instantly launched into where they'd come from, what they'd seen, genuinely interested in what the other had to say. He'd spent three weeks in Hong Kong. She'd spent three weeks in Vietnam. They got out picture books and looked at Halong Bay. They didn't speak of shopping, or meals, or the differences of propriety they found uncivilized. They spoke of the wonderful things they'd seen, and how the world could still amaze them.

I want to be like them when I grow up.

And I've booked my trip.

And was informed that China has just closed Tibet (again) for the period over Tibetan New Years and the 50th anniversary of the Tibetan uprising and the Dalai Lama's flight into exile. They've preempted all and any 'insurgent' activity by saturating the area with army and police.

At this point in time, Tibet should reopen after March. However, given I'm intending to be there during Saga Dawa, I call even odds of the borders being closed again. The ruling party does not like Tibet to remember itself.

Still, we shall proceed under the assumption that this will go ahead. When it comes time to apply for my visa, all posts relating to Tibet will be taken offline.

Should this not come to pass...I'm thinking Mongolia.


Clearly I've a thirst for Chinese oppression.
Posted by Tessa at 8:37 am 4 comments: 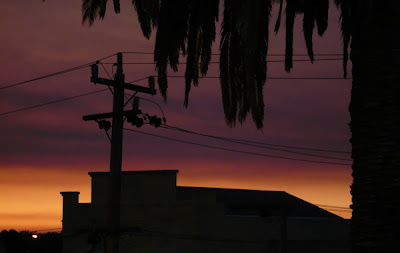 Smoke changes the sun rise, the light of noon, the whole world. Our surroundings are nothing but light bouncing. The light is different.

There have been earthquakes and mindquakes these last couple of weeks. Some of it even turned into turbulence, and fear is so quick to slide a hand in and put the choke on. I'm not choked. That's reassuring.

Still, I remember knives. How quick I was to slide a mind over and grip the blades.

Shall be incommunicado for a few days. Not, I admit, that I've been in communicado much of late. Poor blog. You've been so quick to slide down the priorities list when fiction fiction fiction beckons. I guess I'm weary of dissecting my life.

No fear. I'm sure that's another dirty habit I'll come back to before long.
Posted by Tessa at 10:20 am 2 comments:

Labels: all mimsy were the borogoves, cryptic crosswords, photography

I appear to have run out of soy sauce. I'm not sure how that happened.

The flat feels a bit misaligned now.
Posted by Tessa at 9:05 am 5 comments:

Labels: all mimsy were the borogoves

The projected high yesterday was 43/109 degrees. Within Melbourne, it reached 46/114 degrees. Many outlying towns managed 47/116 degrees.

I spent the day doing very little. I slept in as long as I could, turned no computer on, did not step out the front door, and spent the day reading. I thought my flat was getting hot, until I put my hand on the front door to peek outside, and it was so hot for a moment I thought I was burned. I peeked through the blinds and the heat falling from the glass was heavy and incredible and frightening. The sun was so bright everything was white. I thought the sky had been boiled white too, until I realised no, that was smoke. So much smoke it had no source. It came from everywhere.

The afternoon cool change is a quirk of Melbourne's climate. The vertical drop on that graph is no exaggeration. The cold air thunders across the state with such fury it wipes a hot day away within minutes. There'd been hot gusts from the north all day, scouring the streets and forming giant drifts of leaves on the side walk, yet the cold change was stronger, and when it hit, the flat shoot, the windows shook, the doors to the bedroom and bathroom were blown open by the pressure change.

Too late for most of the state.

Walking around the streets in the twilight, far from the bushfires, I could see the heat. All the trees, plants, bushes, everything, everything is burned. Leaves are crisped and curled and dead and falling. It isn't autumn, but it looks like it. Even the gum trees are struggling, whole branches dead and leaves mottled. There is no green grass. The sun isn't forgotten, even as it leaves the horizon.

I saw a water-bombing helicopter fly over. Melbourne has so few helicopters, I didn't recognise the sound of its engine, and sought it out. Going home to refuel, or repair. 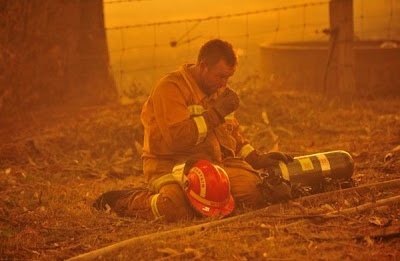 (photo from The Age)

Entire townships have been razed. Every time I update the front page of the Age, the death toll has risen. To ease the strain on the CFA website, a google map keeping track of the bushfires has been set up here. The Australia Red Cross has set up relief centres across the state. Those of us safe in metropolitan Melbourne, please consider donating to aid those who've lost their homes, and especially to the CFA. They're volunteers.

I'm sitting here in a jumper, the first I've worn in weeks, because it is 20/68 degrees right now. I've watched it rain on and off during the day.

They say Australia is the coalmine canary of climate change.

That would indicate we're all fucked.


ETA (2102): Just got back from an evening stroll. Wandered down my street looking at an enormous sunset, a huge bank of hazy clouds lit up red and pink. Beautiful to behold. Until I started to realise something was wrong, hang on, wait a minute...the sun doesn't set there.

Turned around, and yes, the sun was setting exactly where it is supposed to. Blue skies, high scattered clouds catching gold and silver.

Turned around again, yes, the skies of Independence Day filling one half of the heavenly sphere. The sunlight was reflecting and caught in the smoke from the fires. As if so many infernos were no longer content to eat the land, but had to start on the sky as well. Spent my walking turning back and forth, 180 degrees, checking the opposing simultaneous sunsets. Creepy.
Posted by Tessa at 5:45 am 4 comments:

You thought I'd forgotten, hadn't you?

Shark Puppet is a temporary stand in - I'm waiting on Metropolis to get more puppets in. This post is also a temporary stand in - instead of heat keeping me quiet, writing is keeping me quiet. I have to make the most of my ability to turn a computer on before the next heat wave strikes. Between teeth and my bone marrow melting, I'm behind on everything.

(Just between you and me, I'm glad Le Red Fin is gone. He was a touch irritating. Not that Shark Puppet makes for good company.)
Posted by Tessa at 7:41 am 2 comments: