The overly-talented Neil Williamson has been trying his hand at making bread. Without the aid of a break maker. Proper mixing and kneading with his hands, the mere thought of which makes my knuckles and wrists wail. He was kind enough to allow us to act as guinea pigs for his third attempt. I admit, when I took possession of the foil-wrapped bread it was the perfect size, shape and heft, my first instinct was to drop kick it. Some bread is just right for a good punt, you know? Anyway, I didn't do that. It smelt glorious, as only freshly baked bread can. We decided to get some proper butter for the eating, and some brie, and some good soup. Barely waited to get in the door before rending its attire asunder. 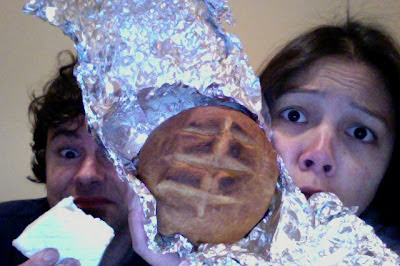 Look at this bread! Look at it! 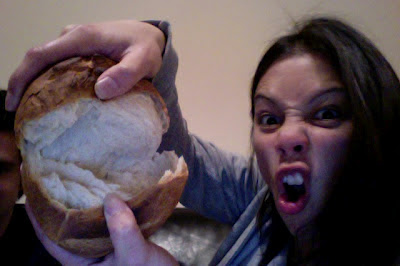 Fluffy and soft and moist and oooooh smells soooooo goooooooood- 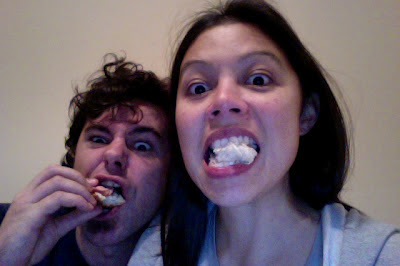 Yeah, to be honest? It didn't last long enough for soup. Props to Neil. If you're giving consideration upon who to include in your party of survivors when the world ends, Neil's post-apocalyptic survival skills in baking are not to be overlooked. All you'll need to do is domesticate some wild yeast and you will be set for baked goods for the duration of your horrible ghastly gruelling survival period, however long that will be.
Posted by Tessa at 9:07 pm 2 comments:

Sometimes the need to sing rises so strong it is no wonder I did not know it was coming; it is the rise of continents, or the movement of stars.

The Hallmark, overly romantacised philosophies that wend through our daily lives as over-processed stock photos with heartfelt yet simplistic captions to do with life love happiness would chastise me for suppressing this urge.

This is not a Hallmark card, and no idealised quote will protect you from the world. Joy, be it carefully constructed or the beast the blindsides you, is precious, yes, and fragile. Indulge it where you will, but be aware that some environs nurture and others will wither it.

An Irish pub on a Monday night, the footy broadcast by Sky on three screens, low lights and glottal Glaswegian accents to my right. I'll keep the song in my ribs, not even let it near my throat. Hold it gentle but firm, like a bird, and, like a bird, it will calm, quiet, and stay with you.
Posted by Tessa at 7:53 pm No comments:

Labels: all mimsy were the borogroves

The last time I was unemployed I had moved back to Melbourne from Canberra after breaking up with my fiancée of five years, I had just finished an arts degree, was living with my parents and had only retail work experience to my name.  It took a year and half of applying for jobs and smiling at interviews before I finally landed a full-time position.

Being unemployed when you don't want to be is awful. Quite a number of the blog posts in the archives are dedicated to the subject of just how awful it is. Very awful. Extremely awful. Awful to the point of staying in that full-time job despite it also being awful because I never wanted to go through that again.

There's been oceans of water under the bridge since then. I've exercised pure financial independence, collected some mean skills to toss on my resumé and climbed the organisational ladder (mostly to find a less crap job). It's one thing to know you're a fantastic worker; quite another to have the track record to prove it.

We've been in Glasgow a month and a half with not so much as a sniff of possibility. I had assumed, not unreasonably I think, that this time around the job hunt would not be as demoralising or as hard. Look! This piece of paper shows how awesome I am! I have references and everything!

Not a bite. Nowhere. On nothing. I've widened my net and started applying for jobs well below my ability and still nothing. No response when applying for a data entry position? I don't even warrant that?

It is different this time though. We've paid several months of rent up front on this place, and have savings to keeps us going those months as well as take us to Iceland. I do have a platform of proven amazingness from which to launch myself from. There are two of us. He's picked up shifts at a pub and I'm doing freelance editing. My worry and despair keeps his optimism grounded, and his optimism keeps my despair in check.

I sleep around 12 hours out of 24, and I feel good. Whole and rested. Even when I have full control over how many hours I spend working on the computer my body gets cranky much swifter than I plan for. It aches and I fight on in frustration, pushing myself into a stupid cycle of forced down time.

These things make me look at my future and wonder how I am ever to fund the dreams I wish to pursue. If I do require that much sleep to be sane, how am I to work a full time job and do any sort of writing or have a social life at the same time? If computers are the devil to my arms, what work can I do? Not housekeeping, that was just as damaging, if not worse. Customer service positions would result in mental stress, and to be honest I'd prefer the physical pain and psychological strain of a desk job than the mental stress of a face-to-face job.

I'm awesome. Really. I'm the most disgustingly great employee ever. And I am a completely spent monkey.

But.
It's different now.
I do not know what dreams I have, let alone which I wish to pursue.
Perhaps here and now is enough.
Posted by Tessa at 12:17 am No comments:

Labels: Glasgow, hands, nothing i have to say is worth saying, sleep, unemployment, work

You open the front door and find an empty syringe wrapper not a foot down the tenement hallway.

You sit on the couch and the rattle and hum of the corner store's metal shutters shuddering down is your soundtrack in this moment.

You pull your blanket around you, kiss feathers and sit a bird on your head, and get back to work.

Labels: Glasgow, This Is Tessadom

And then there were 3.

You wake and there is one dead bird.

You wake. Every day. Without fail. The mattress a thin briar of coils and your pillow never quit right for your neck. No alarm wakes you. There is no pressing need for your wakefulness. You wake, and sometimes you stay awake. Sometimes you even get right out of bed, shower, dress, prepare yourself for the day as though the day might contain anything to prepare yourself for. That is not the norm, for more often than not you wake and, finding nothing has miraculously changed in your environment, you force yourself back to sleep.

So much sleep and yet never enough. You could blame the weather - Glasgow is hardly known for its bright and sunny disposition - or you could blame the stress of finding yourself once again unemployed and, despite your excellent track record and qualifications, seemingly unemployable. You could blame the belligerence of a city soundscape on your too sensitive introvert ears. You could blame a change in medication, even though there has been no change except for branding, but maybe, possibly, who knows.

You could even blame yourself.

You don't want to be that cliché story of a deluded young couple running off to the big city and that big city being cruel, hard and chewing them up to spit them out broken and grey, but perhaps you no longer require any chewing to be broken.

You go to sleep, eventually.

Every day. Without fail. Opportunities and chances to change the tuning of your heart strings. Get out of bed even if there is nothing requiring you to. You know you won't get them but apply for those jobs because you would love to be wrong, please, be wrong. Go exploring because you will find the charm in the city even if the city will not charm you. You wake and even though it cost you dear you fight your little war inside and out. Because this too will change.

You wake up and there is still one bird, chirping and relentless.