While this place has collected some dust in the last couple of weeks - the background image is entirely the appropriate texture for dust - I've done a wee bit of guest blogging, as part of the blog tour leading up to the launch of Baggage. A round up of links can be found here and here.

My contributions consist of a long-winded ramble over on that cool frood Jeff VanderMeer's blog: When the Cover Doesn't Match the Story

Exhibit 6: The taxi drivers in Kathmandu see a lot.

“But you are not Chinese.”

“Half-white Australian. I know. I don’t look like anything.”

“Ah,” he said, and nodded knowingly at me in the rear view mirror. He took me to Kathmandu International Airport without further conversation, and three hours later I began my long slog home.

He was the only person in three weeks to be unfazed by my background.

This post also contained a photo collage of my face, and because it is the single most painful graphic I have ever been foolish enough to decide to produce, I'm posting it here too. 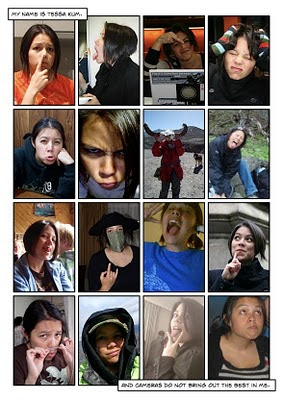 I hate my face.

Remember, the Baggage launch is this Thursday, 1pm at Borders in the South Wharf DFO. Given who is overseeing the catering, the food will be awesome. And by awesome I mean "kill you with deliciousness".

My second blog-invasion was over on Deborah Kalin's lovely, neat, concise online cubby house, where I proceeded to blort another long-winded ramble: Tibet is... I tried to be succinct, really I did.

My life is one of close horizons. No horizons at all, in fact. With all the trees, curves and slopes, my sense of distance is heavily skewed. I assume, not wrongly when in context, that if I can see it, it is in easy walking distance. Half an hour max.

Tibet fooled me over and over. Distance and size conspired to slap my suburban assumptions upside the head every time I gazed at the world, which was all day, every day.

There are a few photos of Tibet accompanying that post, one of which I'll filch and shove right here. 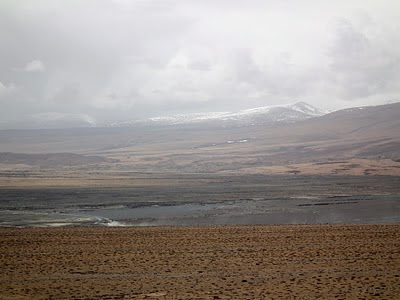 This photo contains a perspective-jab. Oh yes, mountains in the distance, lovely-

Until you lean in close to squint at that little rise of dust in the middle pane and realise that is a car, tiny and distant, which means those mountains are...

And hey kids! Deb is launching Shadow Bound this Saturday! 1pm in room 203 of the Melbourne Convention and Exhibition Centre. There will be books for sale, a Mysterious Door Prize of Mystery, give aways, some more awesome food, and that devastatingly talented author Deborah Kalin herself. She's also reading, signing, and kaffeklatching at Worldcon. All the information you require to stalk her can be found here.

Thank you to Jeff and Deb for letting me mess their blogs up.

Now, it has been brought to my attention that the enigmatic Arthur Miller shall also be attending Worldcon, and has stated his intention to be present at the Baggage launch. He? Is that known for certain? To my knowledge, THE Arthur Miller is deceased, and unlikely to attend, awesome catering or no.

Actually zombies are really in at the moment. A zombie dramatist playwright is probably inevitable.

You see what I'm hinting at?

At the end of Worldcon, I'll report back on how many people came and introduced themselves to me as Arthur Miller. You hear that, people? I want more than TEN, got that? If we can get more than ten, I'll, uh...do something probably entirely in keeping with the character of this blog.

Shove a whole lolly snake up my nose and make a comic out of it, probably.
Posted by Tessa at 7:25 am 10 comments: 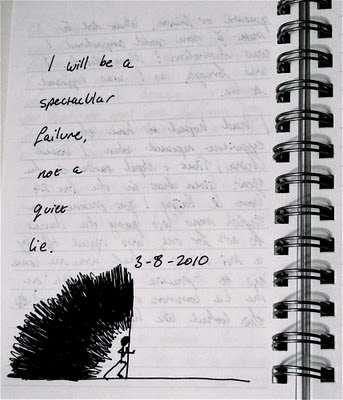 Labels: the quiet lie, the spectacular failure, This Is Tessadom

The Triceratops Never Existed, It Was Actually a Young Version Of Another Dinosaur

Scientists are saying that the Triceratops dinosaur—you know, the three horned one—was actually a juvenile form of a Torosaurus, the three horned dinosaur you don't know. Apparently, dinosaurs' skulls can shape-shift.

The scientists, John Scannella and Jack Horner, believe that the Torosaurus and Triceratops are actually of the same species. According to the them, as a Triceratops aged, its horns and frill became more similar to that of a Torosaurus. Short becomes long, saw-edged becomes smoothed and so on. Having them be the same species would explain why there were never any young Torosaurus fossils discovered. 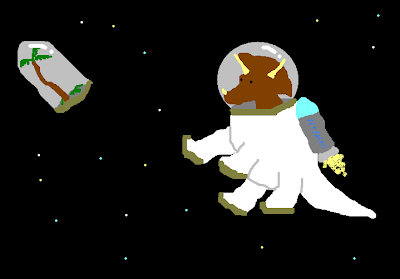