What colour is help?

That was my last head doctor appointment.

It was a gesture only, in order to make sure all my medication is in order for the journey ahead. (It wasn't, by the way, thanks to my GP screwing up medications a second time. I will not be seeing him again. Thankfully psychiatrist actually knows her stuff.)

It should be a triumph to announce that was your last medical appointment, as usually that indicates you no longer require special care. I have to keep reminding myself that while I am free of all these appointments and receipts and referrals and specialists and tests, I am not free of the problem.

I've been on 150mg daily of Pristiq for nearly two months. As an anti-depressant it isn't too bad, probably comparable in effect to the Cymbalta; still hit some very low notes, but generally able to cope with life. No horrific side-effects, at least no new ones. Sleep appears to have been a bit better than previous.

Pain relief has been notable.

Which pretty much proves the psychiatrist, gp and rheumatologist right. I have fibromyalgia.

Which means walking away from a desk job will not necessarily have any impact on the perpetual discomfort in my body. It means I may just be stuck like this forever.

I'm very tired. I've pulled so much wool over my eyes to trick myself into going on a few more days, just a bit further, I don't know what or why or how the landscape of my mind grows. This grief continues, but I know longer know what it is for.

Go on. Keep going. Just a little further. Every day. For the rest of your life.
Posted by Tessa at 9:13 am No comments:

Still the Echoes of Writer Past 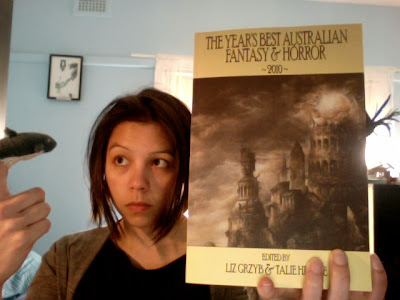 I too have received my contributor copy of The Year's Best Australian Fantasy & Horror 2010. Very nice package. Oddly tactile, the cover has this peculiar waxy feel to it, I can't stop stroking the damn thing.

Among the ToC 'Acception' is lurking (page 141-170 to be precise). It's the scoundrel among fine company. I do not know if there are still copies of Baggage available at Eneit Press, that dear book is rarer than hen's teeth now. The Year's Best is however fresh from the egg, and available for purchase from amazon and indie books.

I never mentioned receiving my Ditmar Nominee's pin, did I? A neat little thing bearing the Southern Cross. It's arrival confused me; I should be proud, should I not? Every achievement is something to celebrate, crawling and clawing my way up this molehill.

But I am not a writer.

Remember 'The Mona Lisa'? That little ditty Jeff VanderMeer and I wrote for Halo: Evolutions. And remember how they were animating it? It's done. All 11 episodes and the full story arc are out, and some awesome being in France has knit them together into the full film, 1 hour and 3 minutes of WHOA.

My favourite bit? This bit. 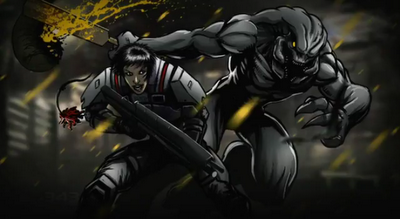 I'm going to have a shower now you're done.

Cool.
I cleaned my nose.
While I was in the shower.

Did you clean the shower after?

Nah.
There will just be lots of little green dots on the shower curtain that will slowly get hard over time.

I can beat that.

[mutual guffawing]
Posted by Tessa at 2:04 am No comments:

I am the motherfucking sea.

Too readily and eagerly I give people power over me. Readily, eagerly, and yet unwillingly. Too often the awareness of what intangible contract I am entering into is accompanied by a sinking despair, sinking as it comes from so high above, drifting down through all the layers of sky to rest on my shoulders and confirm that, yes, that was not wise, and no, they will not acknowledge or respect the power you have given them, and no, they have given you now power in return, and yes, you are a silly girl.

That's okay. I'm used to it. Perpetually exasperated, but used to it.

Just as quickly I recognise the imbalance and while I have no control over gut reactions to throw away comments, I am badhorse at seeing it goes no further. No stewing. No seething and brooding. No wringing and twisting and choking. I'm the little boy with his finger in the dyke, stopping the sea from ruining the town.

This is also an exaggeration. There is seething and brooding galore. There are leaks my other fingers can't reach. But. You know. The wall is holding.

Minutes ago, I read something that kicked off a gut reaction. I sat there, just observing that kick-in-the-guts sickness and unworthiness ripple out through my limbs, and didn't immediately stick my finger in the dyke because that's just fucking ridiculous. Why the fuck do I still let them effect me so? It isn't as though I have not accidentally on purpose given other people power over me since then, people who do acknowledge and respect that, people who in turn have given me power over them, people who drive me to giddy distraction and are not just good to me, but good for me.

Thinking on it, I don't believe I've ever successful taken back power once given.

It would be nice if I was more discriminatory about who I let effect me. It would be really, really nice if I had any sort of control over that. But, I don't think that is likely to happen. If I could change my willingness to give pieces of my vulnerability to others, I don't think I would. I suspect that would only result in never letting anyone in, and I would rather suffer the hurt and damage that others, unwittingly or not, inflict upon me than what I do to myself.

I'm not putting my finger in the dyke. There should not be a sea behind the wall.

ETA: Bizarrely, not two minutes later the internet threw this in my face: 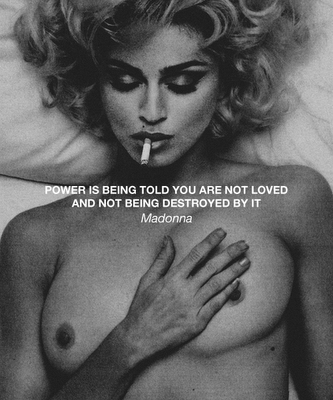 Labels: all mimsy were the borogoves, synchronicity, This Is Tessadom, trust, vulnerability

File under "do not lose": Love Letters

Your deftness with words and how you craft feelings and visions with them leaves me awed and enraptured... pretty much alllll the time. I love your seething rage and your immaculate imitation of cat bum and the cheeky cheeky glint in your eyes. When you smile and when you laugh, you actually glow. That light warms everyone around you. You have a natural beauty and grace about you, a ravishing dark haired vision that my eyes enjoy alighting upon as often as they can manage (I AM NOT ALONE IN THINKING THIS, RAOWR). Your advice and thoughts cut to the core, yet are not of a typical approach... lateral thinking is a rare trait, so admirable.. you are bold, daring... and you blow me away with every twist and side-eye you slip in. And you have slipped in under my skin, in between my heart and my lungs - your warm, slender self - as you have slid in to a precious soft space in all of us. Anyone would be OBNOXOUSLY lucky to know you and call you their friend, confidant, collusionist, co en-cheekenator. 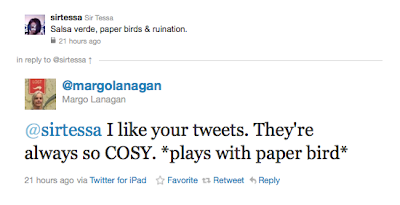 If I achieve no other critical acclaim in my lifetime, I will always be able to say that Margo Lanagan likes my tweets.
Posted by Tessa at 8:55 am No comments:

Labels: all mimsy were the borogoves, margo lanagan, this post is brought to you by the letters O M and G

Steady rain. A magnificent day to be a snail. They're all out basking on the paths and in the puddles. I think for some it is "Snail's First Rainfall". The walk to the station was somewhat treacherous. Concentration on where I put my feet. Couple of magpies hanging out on the platform, indifferent to the wet and feathers well bedraggled. Swishing their beaks in the collected rain for a drink and singing a melodic 'fuck off' when I watched too long.
Posted by Tessa at 9:32 pm 8 comments:

Hello, my strangers known and unknown, if you would like to practice writing love letters by writing to me, I would be okay with that.
Posted by Tessa at 10:00 am No comments:

Labels: all mimsy were the borogoves, why yes my readers are fair game too bwahaha

He just had a haircut. So neat, quite the dapper doofbag. 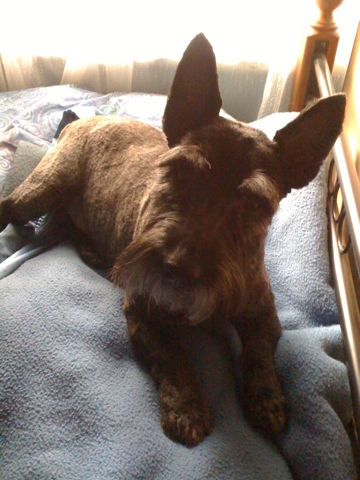 "Just like that — Just time — Just time — Don't care myself if the whole fucking shit house goes up in chunks — I've sat out novas before — I was born in a nova."

— The Soft Machine, William S. Burroughs
Posted by Tessa at 9:42 pm No comments:

Google has FINALLY released an iPhone app for Blogger. About time! I'm posting from it right now!

This would be a more exciting statement if I were not sitting in front of my computer. Concentrate on the possibilities instead. Autocorrect will rescind- Ha! See? Autocorrect will REACH a whole new audience!

Now here is a picture of scotch belly. 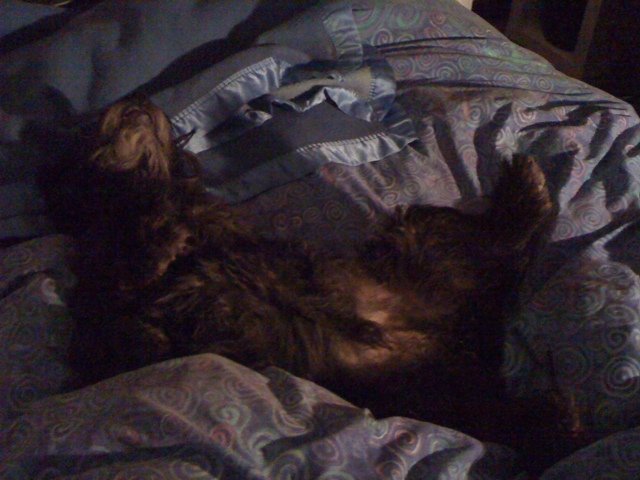 I'm tongue-tied, or finger-fumbled, or silenced. It was a temper tantrum that was probably inevitable, which does not detract from it being unseemly and ungracious. All readers are owed an apology.

I am sorry, and thank you for your patience.

I wish it was a true apology, in that it is one indicative of resolution and change, but I suspect it will only be an acknowledgement of past trespasses. My conduct was wrong, and I have no doubt I shall commit such selfish crimes again, and again, and again.

A month without being able to blog, even if I would not have blogged in that time, was, to put it simply, fucking horrible. For better or worse it is a coping mechanism, and for better or worse it is no longer purely my space. I will have to learn to be more discriminatory in what I do and do not share, and I can only hope I learn faster than I make mistakes.

This little voice I have has grown so much rust in that month. This post was impossible to start.

It seemed prime opportunity for an overhaul, although 'overhaul' is perhaps too strong a word. The bulk of the chaff and faff has been removed from the archives, although there is still a great amount of dross present purely on account of amusement value.

The nearer to the present the posts, the harder to decide whether to axe or keep. I spent a good while pondering whether to take down the posts that prompted the last meltdown. They're still visible for all to see. Some badly articulated notions of accountability and honesty. This blog has a long tail of psychological and emotional history, and I have no need for it to define my online presence. My history is my own.  But it isn't history yet.