On the 13th of February, in the small hours of a Glasgow morning, Moony died.

I never blogged about her in depth. She featured in my tweets and FB status updates, as being a small bird she was the right size to be consumed in small chunks. She was full of entertaining idiosyncrasies, from her frustrating determination to eat nothing but seed (You're a bird! You're supposed to like fruit, dammit!) to her perpetual disapproval of everything we did. Aged only 5 months when we first got her, she was growing her personality for the six months we shared our spaces, and that personality appeared to consist primarily of a grumpy old man. She was cross at everything, all the time. She didn't want to be social or play, and any attempt to do so would be met by her opening her beak aggressively and gawping at us. Very rarely did she actually bite.

When J was at work we'd spend our time quietly. I'd pop her on my laptop screen, and she would sit there preening herself and dozing while I whittled away the time. Watching her preen was my favourite distraction, in fact it still is. For those of you who haven't spent much time around birds, they are the ultimate contortionists. Her white brow was stained from rubbing it on the oil gland on her back. How many animals do you can rub the top of their head on their butt? Not many. She'd get really into nibbling her way through the down on her chest, she'd give her own chin a good dig and eat her feet with relish. The stiff but gentle rustling sound when she ran her pinions through her beak. And oh! When she'd start cleaning her butt, inevitably she find a poop that had dried to her feathers, to which her only response was to yank the offending feather out and toss the whole parcel away. Usually at me. If she wasn't on the monitor, she was on my head. She wasn't much of a shoulder bird. If ever she stood on fabric, her first instinct was to try and eat it. Most of our tops have holes in the shoulders. J had one t-shirt dedicated to her, and she made a fish net out of it. She didn't like shoulders though, too close to the face. We'd put her there and she'd simply climb our hair to our heads. There, she'd nibble away at our hair. Not quite preening, and not quite eating. Despite some good yanks and crunching noises, she never actually broke hair. She'd simply...be unsatisfied with its current arrangement, and so would take it upon herself to rearrange it to her liking. I would end up with literal bird's nest hair.

We'd take her in the shower. She wasn't much interested in getting wet, so we'd just sit her on the shelf and she'd be content with the sound of running water, occasionally making little fart noises to express her satisfaction. When it came time to get her out, she'd kick up a massive ruckus, squawking and shouting as we reached for her even though she couldn't wait to get out.

She was a quiet bird, really didn't talk much of her own accord. Occasionally a fart noise if she was content, often a yell if we were harassing her, but otherwise she was quiet. Except for mambo. Moony loved mambo. We had a little morning routine, to help wake us all up, which was playing Moony's playlist. A few songs she really liked, and mambo was top of the list. She'd perk up instantly, begin stretching and hopping around on her perch. Then she'd begin chirping along, singing, actually singing. Not shouting or yelling or squawking, but happy little trills and whistles. It was nearly the only time she expressed actual pleasure.

She was such a strange little bird, the anti-budgie, if you will. By breed supposed to be highly social, playful, busy, but by nature she was a cross disapproving misanthrope. A bird after my own heart. She wasn't very good at flying. J clipped her wings just a little, to prevent her from getting altitude. She would fly a loop of the room and if she hadn't found somewhere she approved of landing on by the time her stamina ran out she would simply stop and drop, usually landing on the ground with a thud and a squeak. She fell behind the fridge once. And into a (thankfully not hot) pot of water. And into my tea. Then taptaptaptap walk around uncertainly until one of us would fetch her, usually giving us a wee nibble for daring to pick her up even though she expected and wanted it.

Her presence made our horrible little flat that much more of a home. J has a lifetime of experience with birds, but she was my first. I fussed over her and worried about her getting too cold. As an animal she is prey, not predator, so I had to work to gain her trust, and when given it was that much more rewarding. She kept me company when I was alone, kept me laughing.

Glasgow was hard on us. Lack of work, financial stress, a horrid cold damp home, these things were purely circumstantial, but still conspired to resurrect my depression.

This little bird kept that misery at bay. She was a small thing, a fierce, difficult and contrary thing.

Something I'm sure every traveler loves doing is wandering into a foreign supermarket and boggling at some of the produces that in this foreign land are commonplace. Having visited Malaysia, Japan, China, Tibet, Nepal, Iceland, Chile, Argentina, USA and Scotland (seriously, Scotland has things in jars that are just wrong), I'm pretty sure I found something in Swede that takes the cake, the platter, and the whole table service.

'Ost' is cheese. Generic cheese. Now, I can understand adding skink - ham - to cheese, as that is a well-loved sandwich combination and when toasted they are clearly two items of food that were meant to be. Bacon too makes sense when added to cheese. Bacon makes sense with nearly everything. 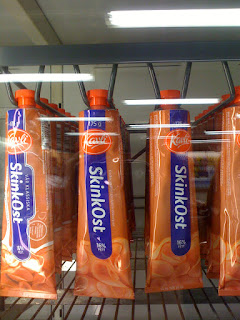 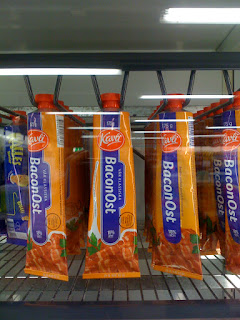 But in a tube? 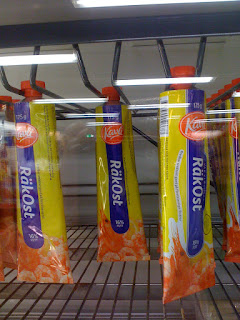 However.
But.
You see.
Räk being prawn. Who the hell puts cheese, generic nothing no name cheese, together with prawns? Only people who have a sense of 'taste' that is clearly a blasphemy against nature, that's who. Only people who are attempting to ruin the very fabric of the universe, that's who.

And who then, you must ask yourself, who then would take this monsterous combination AND STICK IT IN A TUBE?

THE SWEDES, THAT'S WHO.

Labels: groceries, in a tube, ost, Sweden, this post is brought to you by the letters O M and G, travel, wtf

We're outside of Forsa, near Hudiksvall in Sweden. I don't know how to. We're just sitting here in magic. Distilled essence of wonder. To look at this land is absolution for crimes I didn't know I carried.
Posted by Tessa at 10:21 am No comments:

Café Dox is hidden beneath the Old Town in Stockholm. The open space is cluttered with couches and armchairs, and punctuated by the fluted and fat stone pillars supporting the streets and buildings above. A cozy cave with chandeliers and blankets to ward off the creeping cold. Goulash, tea, and a respite from walking on ice.

The snow held the plane an extra ten mounted in the sky. Out the window the propeller broke glittering lines of ice. Snow on the ground, runway, trucks, terminals. We slept on benches we battled for.

A floor to ceiling window four storeys high let us watch the snow fall, silent and slow, all night. 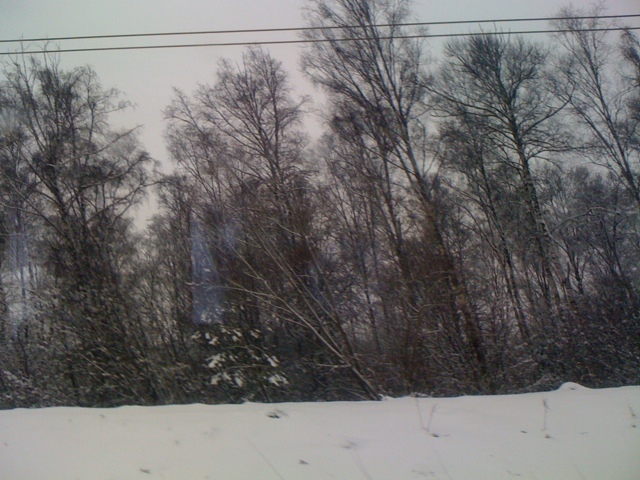