Some, when cresting a summit, will bellow their triumph to all laid out below them. I am not one of those people. To make noise is for me an act of disrespect, and no word in any human tongue can challenge the wind.
Posted by Tessa at 3:06 pm No comments:

If I walk to the end of the verandah, this is what I can see. In the foreground, beyond the frame of this glimpse, a flock of ducks scabbling lazily as they settle on the grass in the dying light.

The shore is stone. The loch is sea. Dried weeds amid the pebbles. On the steps to the footpath a shattering of mussel and scallop shells, derelict barnacles and crushed mother-of-pearl.

A raised voice echoing around a corner. Such fury and vehemence. Don't you dare. Get back here.

To my left, an empty carpark. Two horses in coats, clopping in tandem across that space between buildings. Whingeing whinny and snort.

For a moment, I believe the supermarket not to stock bananas. For a moment.

There is no wind down by the water. The air is cold, too cold busy itself. The silence surrounding me as I stand in the daffodils is dense with space.
Posted by Tessa at 8:54 pm 3 comments:

Labels: all mimsy were the borogoves, photography, scotland, silence, This Is Tessadom, tired, travel, Ullapool
I find my thoughts tripping over small occasions upon which people have found fault with me. Slights and rejections that I have perceived. Looking at photos, I remember an impatient sigh that that pricked my quilt. They walked ahead and never looked back. None of these are insults or intended to offend. None of them. I did not need to bruise. But I chose to, and have, and when I run fingertips across these memories, those bruises quiver in their sleep.

There are memories here too, to shore up these failing walls.

But it is cold. There is no conviction.
Posted by Tessa at 2:14 pm

Labels: memory, nothing i have to say is worth saying

Attempting to Settle With Fibromyalgia

There is only one bus for Ullapool on Sundays. Tonight I will sleep in a bed that will be my bed for at least a couple of months to come. On Wednesday I will no longer be Master of My Own Fate, I will be employed, with a boss, with tasks and responsibilities and my time will no longer be my own.

This will probably be good for me, but I have to admit the notion leaves me somewhat disgruntled.

Coincidentally, I'm coming up on the last of my medication. I was given a slab of Pristiq before I left, enough to last me through the uncertainties of travel in various countries in the EU, also enough that would see me having been on a stable dosage for in excess of six months. It doesn't pay to tweak dosage and medication too much, and my psychologist was quite adamant that before attempting to lower my dosage I should sit pretty for at least six months.

Pristiq, or Desvenlafaxine, is not available in the UK.

The doctor I saw in the Bank Medi Centre did a fair amount of checking her references, and qave me a prescription for Effexor, or Venlafaxine. She was thorough in calculating comparative doses. The prescription given will be a slight reduction, but less than dropping from 150mq to 100mq of Pristiq.

This will be a direct chop and change. As soon as the Pristiq is done I will commence the Effexor. Much as this sounds dubious, I did the same when switching from Cymbalta to Pristiq, and on the recommendation and assurance of both my GP and psychologist, with no notable side-effects to speak of. Apart from space-cadetness. Vague I can deal with, however. Amplified depression, not so much.

I am still shit fucking scared.

The Fibromyalgia Support Group in Inverness has not responded to my email, and further searching has not indicated any particular doctors with an understanding of fibromyalgia in the area. In this case, I figure I'll save myself the travel and register at the medical clinic in Ullapool. There's only one. There are a few practicing doctors there, so even if none of them have any experience with fibromyalgia there must surely be at least one I feel comfortable talking to.

This lead to me attempting to research how one goes about joining the NHS. Should anyone else happen to follow in my footsteps, I have some very simple advice: don't.

The websites, which I am not goinq to link to because they are all confusing and lacking in anything that looks like administrative process, have nothing, naaaasink, on how to go about joining, or information for expats. A friend who had already navigated this told me to simply make an appointment and register with a doctor, and it will sort itself out there. Cool? Cool.


And while rummaging around online learning all this I read about my medications all over again, and about fibromyalgia all over again, and the words THERE IS NO CURE have lodged in my throat, all the descriptions of pain, fatigue, depression, aches, all the limits and restrictions, the unending unceasing reality of it, I remembered these things all over again.

I start work on Wednesday. There is a frightening amount of hope pinned upon this menial job.
Posted by Tessa at 11:43 am

I don't think anyone or anything looks dignified when having a good thorough scratch.

I had to double check that kangaroos weren't poisonous (don't ask) and found the following; 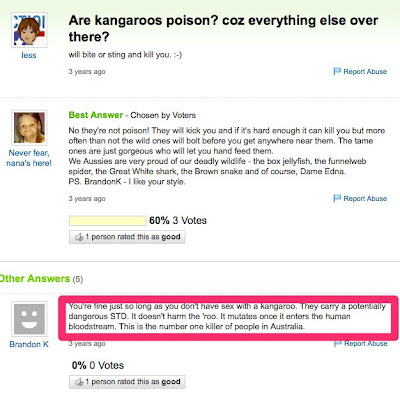 The tiger lily faces me, and I it. Petals arched back, flush and luscious, stamen a demure puckered kiss on a ballgown of violent, furious, unapologetic red. Undefined cloud slides a hand across the sun's face, and the flower glows.
Posted by Tessa at 2:18 pm No comments: