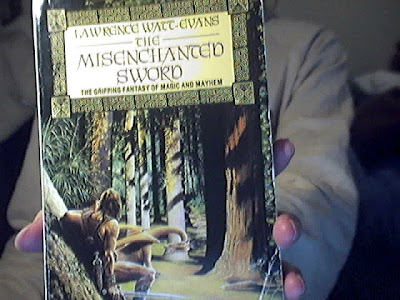 It's old high fantasy, sword and sorcery. It has wizardry against sorcery, oooold school fantasy kingdoms fighting oooooold school wars. Dragons. The sort of thing I scrunch my nose at a bit now days.

Found myself enjoying it though, perhaps because, after the last few books, it asked absolutely nothing of me. The main character (whose name I don't remember and I don't have the book here so I can't look up) is a great big void. People complain of Bella Swan being a hole, this guy is even more so. He has no personal history, no personality quirks, no future goals, he's just a vessel moving the story around. Not a stupid vessel, nor an annoying one, but entirely devoid of depth.

He gets himself in a bit of a bind behind enemy lines, encounters a wizard who gives him the sword of the title, and from there, his life gets complicated.

I was never quite sure exactly where the story was heading. I thought it would follow standard sword and sorcery plot structure, but it started edging off sideways with the end of the war and economic turmoil that followed. In fact, it's a surprising book. Never quite gains depth, but doesn't do what you'd expect it to.

It has a twist ending. Normally such a thing would make me scrunch up my noise, but it was so simply pulled off that I laughed out loud.

Verdict: not a great work of art, but it was fun, easy light reading, and gave me a hankering to go back and find my old fat fantasy books, 'cause there are some styles of story you just can't get away with these days. Which occasionally is a pity.
Posted by Tessa at 10:28 pm