The Death of Grass - John Christopher 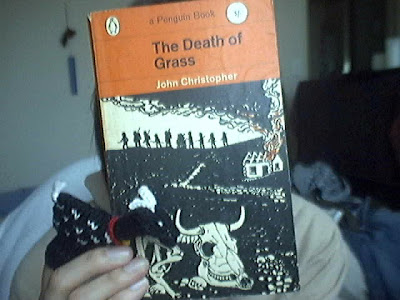 Another old science fiction book liberated from my parents' bookshelves, with the significant difference being this book I had heard of and actively sought out, and holy iguana spleens, batman, it is brilliant.

It's no spoiler to say the plot revolves around a virus which sweeps the globe, destroying the various strains of grass. Grass, as a family, includes important things like rice, wheat, barley, and the like, which aside from meaning no basic foodstuffs like bread and oh delicious rice, it also means nothing for livestock to eat, so suddenly it isn't just breads that are unavailable, but the majority of meat too. The food remaining isn't enough to feed the whole population of the world, and there is no way around it.

The story follows one man, who lives in London where he and his wife can sit in their armchairs claiming the Chinese are barbarians for rioting about food shortages and why should they be sending them food aid anyway when they need the food here; all of which is well and good until the virus reaches the shores of England, a country that imports most of its food. And things get progressively more horrible and ghastly from there.

This book is just magnificent, it is seriously one of the best things I've read all year. Aside from looking at the wider ramifications of such a food shortage and highlighting the modern world's dependence upon a system of growth and delivery that takes very little to disrupt and leave us helpless, it also looks at the psychology involved in living through such a time. Civilisation, such as it is, has no power over an empty belly.

There are no easy ways out. None at all. All the niceties of modern life mean nothing when your sole priority is food. What the characters go through, what they become and the decisions they make are excruciatingly hard. From here, having just had another splendid piece of peanut butter toast, it's easy to pass judgment on them and their actions, and judge them heinous. Easy, but no comfortable. It doesn't take much analysis of the situation to see there were no other decisions to be made.

That the drought here had gone on long enough to start affecting our own food supply was high on my mind while reading this, and with a tumultuous climate and industry pollution doing strange things to the land and weather, methinks this book is still all too relevant.

Verdict: Magnificent, seriously, a tight story like a kick in the teeth, fantastic pacing, absolutely no mercy for the characters or the reader. Seek it out.

Thanks to Miss Apricot, who was a touch alarmed at the bovine skeleton who she thought she might have recognised as her neighbour's brother's sister-in-law's cousin.
Posted by Tessa at 11:31 pm