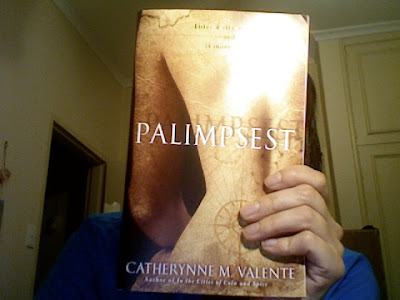 Keeping with the theme of female authors, of which I have so few books that meet that criteria. I was astounded on the first page. Valente's prose can only be described as sumptuous. Her world-building: sumptuous. Characterisation: sumptuous. Every aspect of story-telling that is contained within a book: sumptuous. I felt, sinking into those paragraphs, that I was being given a glorious treat, a pampering only the truly privileged get to experience and the rest of us only dream of. I think this may be the first of Valente's work I've read, and I will certainly be hunting out more.

Palimpsest is a city not here, but there. It isn't a dream, but it may as well be. It isn't imaginary, it is real, yet not what we consider real. There is only one way of visiting - to have sex with someone who has already been touched by it. It's almost a viral city, of a sort. A sexually-transmitted city. Upon arriving, you are quartered, linked with four other people who are also new to the city, and forever bonded with them.

Upon arriving, it's hard to do anything upon waking up except try to get back.

The book follows one such grouping, as each individual bumbles around as any foreigner new to a place will do, making faux pas here there and everywhere, and we follow them as the city comes to take over their lives, even when awake. Obsession has that affect.

As the story progressed and the utter amazingly spectacle of gorgeousness continued, a slight unease grew in me. Perhaps I've read about too much ordinary crime at work, but after a while I figured what was bothering me. The obsession with the city and the massive drive to get back to it, at the cost of all else - it was similar to that of a drug addict's need for another hit. Too similar for me. What they put themselves through, what they put the people around them through...bearing witness to that pulled me back and away from that splendid city, and the final conclusion made me want to run, far and fast as I could.

Dangerous things attract us, don't they? Even now, I'm flipping through the pages, savouring these sentences.