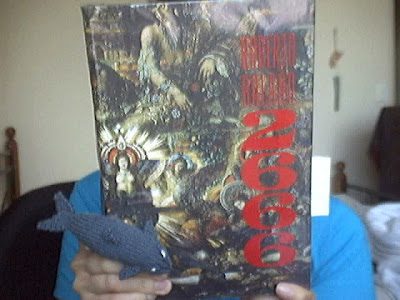 This book needs so much more than 10 minutes.

I couldn't write, I had nothing to do and a head to fill and I spent all my free time sitting here, at my desk, reading. I picked this up purely because now was a prime opportunity to read huge books without having to carry them around. Seriously, if I'd tried to read this holding it on a train, my hands would have been in even worse condition. It lay here on the desk, flat, and I turned the pages.

It's a leviathan. It needs so much more than 10 minutes. It deserves so much more. It's a book I want to dive deep into, rummage around in the guts and pull out all the invisible things that made themselves felt. It's an incredible book, a book that spans much more than the numbered pages it sits on. It sits deep in Europe, and deep in Mexico. It sits deep in academic aristocracy and deep in the poor of Santa Teresa. It's a love story, an angry story, a story of family, a story of monsters. A fairytale in the original sense of the word, a terrifying tale. It's a mosaic novel in which the pieces of the mosaic are so large they consume each other. It's five different stories. It's one story. It's about writers and books, critics and ideals, murders and lovers, lost and found, escapes and advances and what is not acknowledged and what is ignored. It's books in a book about the effect of books. It isn't.

I just don't know what to say because I can't say enough.

...had already begun a voyage, a voyage that would end not at the grave of a brave man but in a kind of resignation, what might be called a new experience, since this wasn't resignation in any ordinary sense of the word, or even patience or conformity, but rather a state of meekness, a refined and incomprehensible humility that made him cry for no reason and in which his own image, what Morini saw as Morini, gradually and helplessly dissolved, like a river that stops being a river or a tree that burns on the horizon, not knowing that it's burning.

I read this when I couldn't write.

And maybe I'll never be able to articulate what that means.

Verdict: Magnificent.
Posted by Tessa at 1:40 am