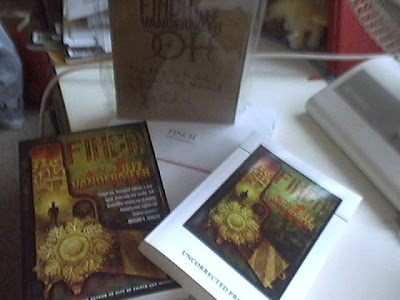 In that photo you see the (abridged) evolution of Finch. The MS printed out on both sides, followed by the proof, followed by the release, followed by the super-saiyan-insane-bling Heretic Limited Edition. If only all books achieved such a state of being, because the camera does not do Heretic justice. It's so shiny and glittery and a block of literal and literary gold.

I almost feel like I can't and shouldn't write my thoughts on the book, seeing as I was privileged with punching it in the nuts a few times when it wasn't properly hatched. When you've approached a book from a critical approach, your relationship with it is different than if you'd picked it up to read for pleasure. You force yourself to hunt out any tick or smudge that could be polished up to make it bigger, brighter, better, you're unwilling and unable to forgive anything. At least, that's how I am with stories I've critiqued.

I picked up the market release (I do not let Heretic out of its bag) and read it out of curiosity, to see how the butterfly had emerged from the cocoon. It remains a fucked up cocoon and a fucked up butterfly. Barely a year since I read the MS, no surprises left for me, and it didn't matter. I ate it in a day. Again.

It's garnered all sorts of praise and accolades since being released into the wild, and it deserves it.

Verdict: It's Jeff Fucking VanderMeer. I do not froth about the brain over his writing without exceptionally good reason.
Posted by Tessa at 11:55 pm