See these other horns? Lo! I blow them. 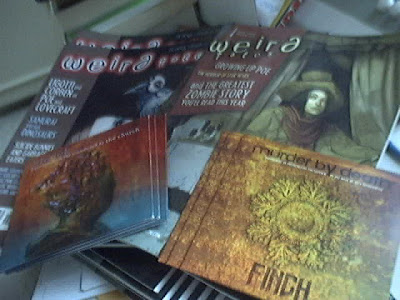 #353 is pretty damn awesome, with special mentions going to Jeff Johnson's The Garbacologist (I love the bunnies), Caleb Wilson's Court Scranto (what was chilling was, for a long while, I forgot it was 'speculative'), and Hunter Eden's Selected Views of Mt. Fuji, With Dinosaurs (which is exactly what it says it is).

#354 is, hey, pretty damn awesome as well. Which you'd expect, really, since this is Weird Fucking Tales, dammit. Favourites were Richard Howard's Ambient Morgue Music (which you can read free on that link, and I encourage you to do so, 'cause you need some disquiet to unsettle you, sitting comfortably at your desk), The Men In That Water by Zdravka Evtimova, and one I'm particularly fond of, Kevin Veale's Twisted, which is pegged on the cover as "the greatest zombie story you'll read this year" and it totally is. Think "gonzo".

The two soundtracks are as different as the bands responsible for them, and each suits their book-genesis marvelously. I'm quite in love with the Murder By Death album. Aside from being luscious on the ears, it's also a surprise little object of beauty.

All these delectable items of art are available for the devouring. Leave a comment or email me, strictly first come first served. And, er, I must admit I'm broke right now, so if you're inclined to pay for postage, that'd be much appreciated. NOW, TAKE. THIS AWESOME SHOULD NOT BE WASTED SITTING ON MY DESK.

The devilish and debonair Jesse Bullington did not have his book, The Sad Tale of the Brothers Grossbart, available at WFC. This shat me to no end. "Nevermind," I said, "Orbit UK are usually pretty good about distributing to Australia, and Borders tends to carry US releases anyway, fie on them." O RLY? NO. NOT REALLY. So. Fine. Whatever. No, really. FINE.

All you kids in the US and UK who enjoy vulgarity and the like (come on, it has the word 'gross' in the title) have no excuse to not read this book. Go do so, so I may despise you as is proper.

Playing bad cop to Jesse's bad cop, I also met Molly Tanzer at WFC, who is every bit as kickass (there was far too much kickass at that convention, I have to say). She just took up the mantle of assistant editor at Fantasy Magazine. Booyah!

Where the first thing she wrestled into submission was Reading By Numbers by Aidan Doyle, who I've become acquainted with via internets/Jeff, and dude, when I saw this I did not think "it's a small world." No, I thought, "holy shit, the incest cannot be avoided in writerly circles!"

(Nasty story, by the way, naaaaasty.)

Mighty Deb is having a mighty give away, with 4 copies of Shadow Queen available. 2 copies for Aust & NZ, and 2 copies for everyone else. You who fall in the 'everyone else' catagory should definitely jump on the opportunity. I reread it while Not Typing, and damn, DAMN. WHERE IS BOOK TWO!?

She also linked two an incredible set of short essays by Justine Musk, the collection aptly titled why you need to write like a bad girl, part one:

She says, “I became my own rebellion.”

I would turn this phrase over in my mind, thinking that it sounded good, but what did it mean, exactly? Why did it appeal to me so much, and seem necessary to anyone who wanted to be an artist (or entrepreneur or hacker or any other thing that demands stepping off the beaten path)?

The double standard for selfishness still amazes me. The same culture that celebrates Ayn Rand’s “virtues of selfishness” will turn around and call women selfish and not exactly mean it as a compliment. Call a man ’selfish’ and he’ll shrug his shoulders; call a woman ’selfish’ and she’ll feel so shamed and cut to the core she’ll twist herself inside out to prove otherwise.

I have hollared "FUCK YES!" at Deb for drawing my attention to those posts, and could quite happily do the same to Madame Musk. I shouted it at the window when I finished reading it the first time, and I've read it a few more times since. It is true, and having it so cuttingly articulated felt like being delivered vindication I didn't know I was looking for.

It was easier not being able to type. It was mass-silence. There was nothing for me to do, so I did nothing. Now that I am allowed some highly restricted typing, I find myself twisting myself inside-out, to borrow the phrase. There are so many emails sitting in my inbox, all of them excellent little missives I want to feed, but-

But I have to choose. If I write to you, then I will not be writing my novel, my blog, my anything else.

That choice is eating me up, because yes, I feel selfish for letting these conversations lie stagnant, and I feel I'm letting people down, or slighting them, by failing to respond in a timely manner. I don't see that stopping.

But I choose this. I choose to be selfish.
Posted by Tessa at 5:45 am