Beneath the Red Sun - Ben Peek 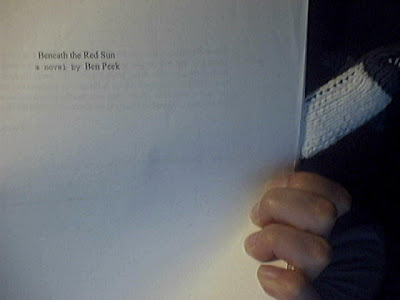 On the day of his release, he is approached by a mortician who informs him his brother and family have been murdered, and that the whereabouts of the murderers is known.

I'd say this story is like an onion - nothing but layers on layers on layers with shit that will sting your eyes (and it totally will) - but that's not entirely true. It's more like a Mandelbrot picture. Saying it's an onion implies that beneath all the layers is a core. Mandelbrots never end. If you wish, you could read it as nothing more than a cycle-of-violence/revenge story. Good luck trying it. I don't think it's possible to read such an intensely unforgiving story and be oblivious to the many grey areas and uneasy questions being posed. Class, race, gender, culture, personal ethics and political morals, and more. It's meaty, yet lean. No spare flesh, all the muscle on the bones is exactly what is required and does not lie idle.

It's also the most Australian not-Australia I've encountered in fiction. Heat (possibly empathising a bit much due to the weather today and tomorrow) and dust, and dust and heat. A desert that isn't sand, but dried cracked clay, run through with gullies and no water. Townships set up to mimic the Motherland, impractical in the new climate. Massive divides between the colonisers and colonised. Half-castes caught between. And oh, I don't know, I know I'm babbling now, but it was just breath-taking. The details were perfect, precise, and fresh.

And you may not notice if you're from the US or UK, but there's a shitload of books based in or extrapolated-not-too-loosely-from US/UK in both landscape and history, and it's quite easy to overdose on it. At least, I hit saturation point pretty regularly. Hence I leap about seeking out books from other places, to counterbalance and keep me interested in reading. Keep it fresh.

And here! Something based on the furious, cheating, thieving, murdering history that makes up the world I live in, something I'm pretty familiar with, and yet, was goddamn fresh. Man, I want more. Washed my head right clean.

(You know, I almost understand nationalism. Here's a piece of fiction that makes me raise my fist and go "FUCK YEAH! THAT'S MY HOME! BE JEALOUS AND WEEP YE OTHERS!")

(Which further leads to the idea of looking for yourself in fiction, something I have never really understood because I've considered myself too much a mongrel with outsider psychology to even consider a character would echo me, but this, I think this is what was meant...)

It's also a brilliant piece of craft. There are two streams, one following Matthew going forward in time, the other being Matther's brother's diary. Although we already know the family's fate, both streams are equal in their power to progress the plot and gift the reader with further insight into the politics and personalities involved. In a strange way, the two streams work backwards as they thread around each other. It must have been a headache to write, but extraordinary to read.

You can't buy this book because it isn't published. The world is fucked up like that.

Verdict: Fucking oarsum, and oh please some one buy it and publish it?
Posted by Tessa at 10:04 am