Death on the Nile - Agatha Christie 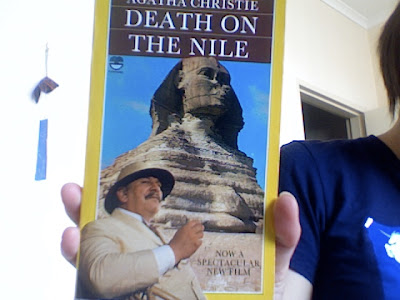 Following my 'must read more female authors' push. I've never read any Christie before, and I don't think I've seen any of the films either. What I know of her is the influence she had in various genres that I have encountered.

Standard plot - someone dies in circumstances that limits the number of suspects! Poirot, despite having no jurisdiction or authority, is the only person capable of solving the crime before the true authorities can step in! Go, go, Poirot brains!

What surprised me was how far into the book the actual crime occurred. There was a lot of set up, displaying an array of people with motives to murder a young heiress, and also a couple of potential victims. Then, she dies.

Okay, I thought, time for sleuthing!

And then more people die.

Which rather startled me. And then more people died, and I was even more startled. There weren't that many characters.

I did have a lot of fun trying to puzzle out events and solve things for myself (was vexed by the fact that every character out there seemed to be very carefully and deliberately stupid), but it didn't rock my world. Wasn't new to me, probably because her influence is so widely spread.

Verdict: Shall definitely eat more of these.
Posted by Tessa at 6:58 am