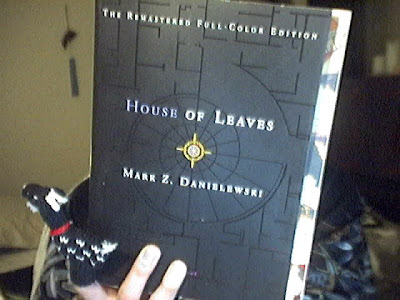 You know, this book is insane, and when I say insane, I mean insane with a capital "fuck". It requires a hell of a lot more than ten minutes of typing to even-

But at the same time, it's a well covered book. It's a book that just begs to be analysed and discussed and have essays and articles written about it, and you don't have to look far at all to find all sorts of writing dedicated to what is contained between the covers. For books that are so well chewed over, I generally feel I have nothing to say which has no doubt already been said a hundred times over, so why play that tape again and add to the white noise?

(For your own memory, Tess.)

I say 'contained between the covers' because it is not so easily fitted in the word of 'story'. It's an academic paper. It's the diary of a man losing his grip on the normal shared world. It's a documentary. It's insane, and when I say insane, I mean insane with a capital "fuck". I can't sum up the various stories contained within stories folded into other stories sharing footnotes creeping into each other's page space shuffling each other out of order off the page out of sync infecting each other with different coloured ink. I can't. I won't even try.

This book frightened me. Not the way Conrad Williams frightens me, that I have to sleep with the light on and check there's nothing in the room about to eat my face. It scared me in a less visceral, more emotional level. It made me question sanity, not my own sanity, but the sanity of the world. I had to stop reading it at 7am on a Saturday morning, with the sun high and bright and city waking and happy.

I didn't know if, with all those stories spiraling around each other and out of control, as the stories spiraled down the stairs and into a place that could not exist, the book would be able to carry the weight of what it contained, but it did.

The edition I have is 'remastered full-colour', containing some end errata which, after the main body, didn't quite sate my hunger for more more more I don't understand yet, but was enough for me to step back and say, actually, I don't want to know.

Verdict: also FUCKING OARSUM. Possibly the most challenging book I've ever read. The damn thing will make you work, you have to earn your fuckedupedness. I love it. I'm a sucker for anything that plays with page formatting.

Thank you Miss Apricot, even though she doesn't like the book and disapproves of its existence.
Posted by Tessa at 11:34 am