I forgot to mention that on the walk home the previous night, I had the luck of witnessing an apparently significant part of modern Japanese culture; business men going out together after work and getting smashed. There were mobs of them around Sakuragicho Station. My particular favourite were the three who had taken up position on the steps of a coffee shop. One of them had given up any pretence of sobriety, taken off his shoes, and was using them as a pillow in the middle of the footpath. Classy stuff.

I rocked up to the con on Saturday with no real plans in mind, and bumbled into an interview session with Yoshitaka Amano, which was a slow discussion on the illustration industry in Japan, due to frequent pauses for English translation. It was interesting to note the apparent differences in time frames between the Japanese book market, and the English. The editor of the Vampire Hunter D books was also present, and called up on stage to field questions as well. I only remember his name as ‘Ichi-san’, unfortunately.

I had hoped to have Amano sign a book, but after the interview finished up, he fled. Quite literally. A shame, considering he was one of the guests of honor and didn’t seem to want anything to do with the people who had come to see him. I noticed he hadn’t been scheduled for a signing session either, and I’m pretty sure that was his only panel. Crazy.

After that was a panel discussing the pros and cons of mundane science fiction, from which no conclusions were drawn. It almost sounds like science fiction is castrating itself with its attempts to define what it should and shouldn’t be. I’m probably just not playing sponge in the right places, but I don’t think fantasy suffers the same existential angst.

When that finished up, I headed over to the Inter Continental (I keep thinking of it as ‘incontinental’) to meet up with A, Ellen Datlow, and some of Ellen’s other Clarion students. She guilt tripped us about not writing more. It was not without effect. (Thanks to Raj, one of Ellen's better photos of A and I.)

After a quick meal at the Queen’s Square (seriously, who says eating in Japan is expensive? What on earth are they eating?), I dropped off my bags and then headed back for the Hugo Awards. 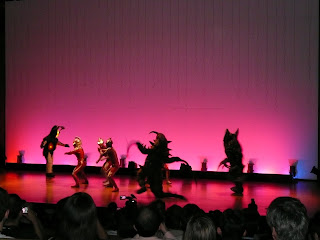 (That's a lot of Ultraman.)

George Takei and Nozomi Omori presented the Hugos, both being bi-lingual, and skipped between languages with an ease that made me suspect that sometimes, they weren’t aware they were doing it.

Despite the fact that everything had to be said twice, in each language, the presenters and receivers caught on fast, and cut all their speeches short. Ultraman presented the Best Long and Short Dramatic presentation. Sort of. The character of Ultraman doesn’t actually speak.

Did I mention Takei’s voice is sex?

There was a woman brought up on stage to stand with the two hosts. It was hinted she was a ‘back up translator’, when in actual fact, she was an ornament. She stood there, looking very elegant, and serving no other purpose. Given the kafuffle of last year’s Hugos, this seemed…well, bloody daft.

A and I decided it was still too early to hit the party floor, so hunted for dessert. Our prey turned out to be rolled crepes, with whipped cream, custard and strawberries. Nom nom nom.

The party floor was again, ridiculously over-crowded and hot. We made a brief stop in at the Norwegian room to ninja some drinks, before discovering a secret party made of awesome. The Sense of Gender party was in quite a grand suite, and we found a small, not particularly crowded tatami room, that had a window open. Yes! Air! We secured some floor space, which lead to people leaving us offerings of food and drink. I’m not kidding, they kept just putting food in front of us. I tried sake for the first time, a particularly good brand, if I understood the man correctly. Deadly stuff. It was strong, yet it had absolutely not bite to it. It didn’t burn on the way down at all, and was deliciously smooth.

Late and big nights make it hard to get up though, and I’m glad I set me alarm this morning, or I wouldn’t have made it. Slunk into Cory Doctorow’s kaffeeklatch, and played sponge, followed by a panel on copyright. Naomi Novik talked about founding the Organisation for Transformative- crap, I can’t quite remember it. Basically, an organization along the same lines as the Comic Defence Fund, but for fan fiction writers. Word, I say, word. They were pretty much preaching to the choir, but related some pretty interesting and horrifying information. What bothers me most is, given every thing that was said, I think the change in the way copyright works has to come from America, and have a knock on effect through all the Free Trade Agreements America has with various countries. Given the massive influence American policy has on the world, has on Australia, it rankles that I don’t get to vote in their elections. Not that my vote has made a difference in Australian elections anyway.

A trip out to for lunch, which was an enormous sushi set for 1395 yen, which I could actually identify. It contained some atomic wasabi, which blew my nose out several times. We’re both weak people, and hit the mochi ice cream again. Someone import this!

I’d intended to sit in on the Masquerade afterwards, but the start was delayed, so I skipped out. I figured, a couple of hours spent sitting in my hotel room, not doing anything, was due. My feet appreciate it.

I think I had a different cleaner today. Yesterdays seemed to be under the impression that two people were staying in this room; I was left with two sets of slippers, two yukata, two cups, two tea sets, two razors, about five toothbrushes, none of which I’ve used. I did have two pillows though. Alas, only a lone pillow greeted me when I got back.

I love the streets around the hotel. These tiny, cramped one way streets with barely enough room for a single car to drive along. It’s impossible to get your bearings, with the sun hiding in haze and tall buildings on all sides. 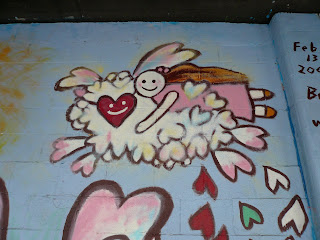 (happy love sheep graffiti)
Posted by Tessa at 6:09 am