I DIED A GLORIOUS CULINARY DEATH

I'm posting out of order, but this is important. 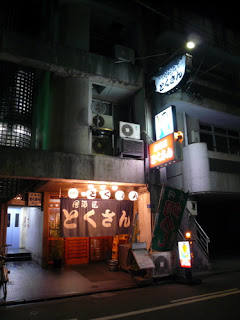 They didn't have any fugu. Nor did they have an english menu, or those terribly useful plastic display models of their dishes, or photos I could point at. I figured, since I was prepared to pay for a fugu dinner (which is generally over $100), I might as well go ahead and have some fun, and asked them to choose my dinner for me.

I think this put the young waiter in a bit of a spin, but a grizzly old man came and sat next to me, and after we'd attacked the two-way dictionary I had, he badgered his chef-minions into line. Neither he or any of his staff spoke a single word of english, so once it was established that I wanted dinner, it was left at that.

First, I was served a small plate of sashimi, the freshest I've had yet. There was some surprisingly soft and succulent squid, and some unidentifiable fish to go with it. I was instructed to squeeze lime juice all over them, the Tokushima lime being something of a local delicacy, dip them in soy sauce, and pig in. Oh, lovely.

Then was brought another small plate of yakitori; a grilled chicken skewer, and a croquette of...something. I'm not sure what, but it had gristly bits in it. He decided I needed some green tea to go with this, and made a cup up for me.

I though that was about it, as sashimi and yakitori seemed to be the place's specialty, but no! Grizzly old man brought out another plate, this containing a whole fish, beautifully steamed and served with mushrooms, bamboo shoots and soy sauce. It wasn't a large fish, pretty much the perfect size for one person, and so very tender. I ripped that apart and picked the bones clean.

I figured that would be the end, and I was starting to feel full, but no! Again, another small plate was brought out, this with a portion of fried fish. The skin on this fish was crispy and fucking amazing. Grizzly old man squeezed lime all over it, and then drowned a pile of...something, in soy sauce, and directed me to eat it with the fish. Mouth so happy! I asked him what the 'something' was, and he said 'yama'. I only know 'yama' as mountain, but according to the dictionary, it is also grated and seasoned yam. He added 'daikon', and that I recognised. Chinese radish. I can't order dinner to save my life, but I know a radish when I hear it.

That had to be the end. Right? BUT NO! Grizzly old man brought out a last plate of freshly prepared sushi. Prawn, tuna, squid, and three other fish unknown to me. One of them was surprisingly sweet. I ate these slowly, as I was definitely feeling my capacity. I might look like a huge heffalump gaijin, but I don't have that much space in my tummy.

BUT NO! Grizzly old man brought out a bowl of miso soup, which had a piece of fried something that came from the sea in it. I was having great fun, I have to tell you that.

And that was most definitely the end of dinner. Yet when I stood up to pay, grizzly old man said "chotto matte", "just a moment", sat me down again, and brought out a glass of fruit, all done up to look every so pretty. I just started giggling.

Now if grizzly old man had been the one to say "I be your Japanese boyfriend, ne?", I'd have been all over that. That was fucking awesome, the best food I've had this whole trip, and terrific fun to boot. He gave me his business card, and if I've translated it right, the restaurant is Tokusan, just across the road from the Agnes Hotel, in Tokushima city, Shikoku. 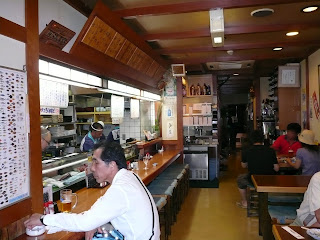