Today was a day largely spent in transit. From Hakone-Yumoto, I caught the train to Ebina, where I switched to the Sotetsu Line as far as Yokohama (y hallo thar!). At Yokohama I was back in JR territory, and used my pass to catch the train to Kamakura. I thought it would be a ways away. It’s no small distance on the map, yet the local train only took 25 minutes. Given I had no idea where my hotel was, I was all set to catch a taxi again, but at the last minute decided to ask at the tourist information office. And lo! My hotel was just around the corner. Excellent!

It was too early to check in, so I dropped off my bag and asked where an internet café was. They said there wasn’t one. I asked if there was anywhere I could get internet access. They said none in Kamakura. O-kay.

I took a stroll up the main street to Tsurugaokuhachimangu (try saying that three times fast) Temple, the focus of a matsuri (festival) this weekend. People were ambling about, checking the place out as it set up for the festivities. Drummers lined the path up to the shrine. There were enormous offerings of sake and beer about the place. I washed with sacred water, and paid my respects. The nuns were selling various charms, and I found one specifically for good luck during study, which I grabbed for my brother. If I’m up early enough tomorrow, I’ll mail it home to him. 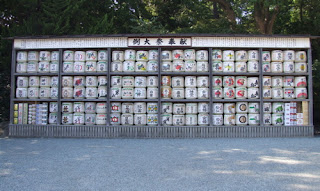 (A lot of sake. You can see beer also on offer down in the right hand corner. Hachiman, he likes to chill with beer and a BBQ sometimes.) 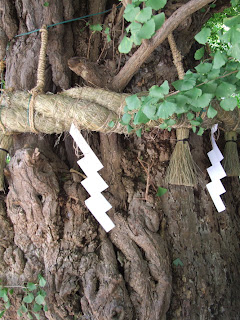 (The truck of a ginko tree, a fucking HUGE ginko tree. This stolen from wikipedia: "Minamoto no Sanetomo, the third Kamakura shogun, was assassinated on February 13, 1219 by an archer hiding behind the great ginkgo tree that still stands beside the great staircase at the shrine." If it was big enough for an archer to hide behind in 1219, imagine how old it must be now.)

They also had fortune telling, this time also available in English. I shook the box and came up with stick number 2, a fortune of “Sue-kichi”. “Sue-kichi” is quite a mixed bag of good and bad fortune. Particularly, it said that my wish would not come true if I became careless. If I knew which wish that was in reference to, I might have some idea of how not to be careless with it. (ETA: I did a quick google on sue-kichi, and it's only one step off being bad luck. I'll take it as meaning the patterns aren't about to change. Heh. It amuses me. This piece of paper, it's keeping it real, yo.)

In a shady side path from the main shrine I noticed some kimono-bedecked women setting up what I thought was a tea house. One of them noticed my unrepentant sticky-beaking, and waved me in. It wasn’t just a tea house, they were actually performing the tea ceremony for whoever wanted to come and sit. Fantastic luck. I sat by some French tourists in the front row, and they served us with sweets shaped as the fletching of arrows (mochi on sticks). The ceremony was quite an involved process, every movement precise and measured, from the placement of the whisk to the folding of the cloth, and the woman performing it appeared to be exercising extreme concentration. They served me the first bowl she made, pointing out the relationship between the fletching mochi, and the arrows and target painted on the side of the tea bowl. Green tea on its own is quite a harsh taste, but when tempered with the sweet, the two tastes melded together to become something quite refreshing. The formality was surprisingly soothing. I may visit them again in the next couple of days. 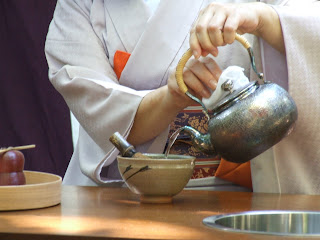 I checked into my hotel, dug up all my dirty washing (most of my bag), and asked them if they had a laundry. They said no, and given this is a one floor hotel of a four floor building, I wasn’t that surprised. I asked for a coin-op laundry, and they said there were none in Kamakura.

Colour me sceptical. I believe that is the answer they give when they want to take the easy way out of dealing with smelly gaijin. Regardless, I really needed to do some washing, so me and my dirty clothes had ourselves a bath. Fah. Hand washing is even less glamorous than sitting in a laundry. I spent the next hour pointing the hair dryer at my socks and jeans. Socks, you know, they just don’t dry on their own. I’ll have to do another batch tomorrow morning, provided this lot has dried enough for me to move them.

I had a wander as the sun set. Either falcons or hawks were out and circling busily over the streets, frequently crying out. Most shops were shutting up, including feeding holes. I think I’m going to have to start making lunch the main meal of the day. I found a sort of food court by the station, where they were selling super awesome bento sets in such pretty boxes that opening and eating it seemed an uncouth thing to do. 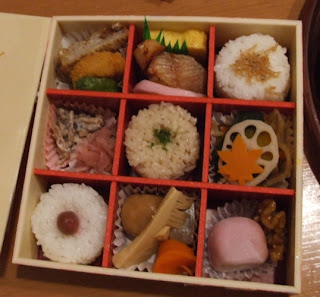