There’s a man in his underpants dancing around on TV.

Nu. Nununu. Shinkansen make my ears hurt. The trip from Sendai to Morioka was less than an hour through the rice paddies. I’ve mentioned the seats on these things are great. They’re bigger than economy class plane seats, and with a hell of a lot more leg room. They’re big cushy things, with arm rests and tray tables and a lot of recline. Yes, we likes the seats. Just not the trains. 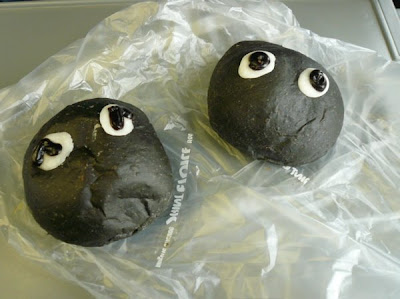 (Look, when bakeries sell stuff like this, you have to buy it and eat it. It's the law. Just black ink, they were only filled with custard.)

At Morioka I found the information centre and was given a helpful map indicating where my hotel was, which was only across the road, actually. They gave me a cookie as reward for using their services. No kidding.

I’ve checked in and out of so many hotels now, I get my passport out before I’ve even given them my name. Still not sure why they need to photocopy my passport, but the staff always seem relieved when I’m familiar with the drill.

My luggage hadn’t arrived yet, which seemed to erase that relief and send them into a panic, even though I wasn’t that concerned. Free wireless in my room meant I had stuff to do while waiting for my dirty washing to appear. This room is the smallest I’ve been in yet. Can’t turn around in the bathroom without knocking something. Like it miles better than the resort. 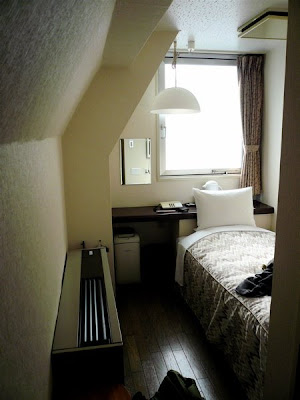 The hotel has no coin laundry, so I was given another map with a path drawn on to one nearby. This map was screwy with street sizes, angles, and block lengths. I got lost, and spent some time wandering around the back streets of Morioka before heading back to the one landmark I was sure of, being the bridge. After another couple of false starts, I found the laundry, and spent an exciting evening watching my clothes tumble in the dryer, while two women swept the street outside their building and talked about a fat cat with a recent surgery stitching. 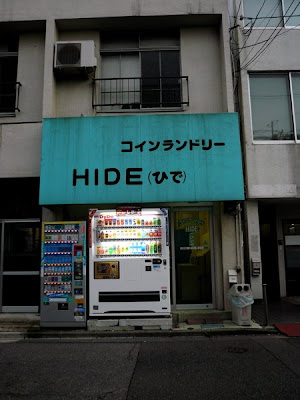 (There isn't much to indicate it's a laundry at a glance. I spent a long while watching the lights on the cigarette and drink machines scroll through the rainbow.)

It is very cool here at night. Nearly time to get my windcheater out.

I walked past the fine and well presented restaurants, and found a simple little ramen joint staffed by one woman in a giant kitchen. She cooked me a big bowl of soup noodles, gyoza and rice. They were good quality noodles too. It’s in these little places that I’m comfortable. The finer restaurants make me feel like a trespasser. Maybe if I was a bit better dressed that wouldn’t be the case, but I didn’t really bring any thing that I couldn’t hurl in a washing machine. Or shoes that weren’t made for spending all day in. My functional shoes don’t look that pretty. 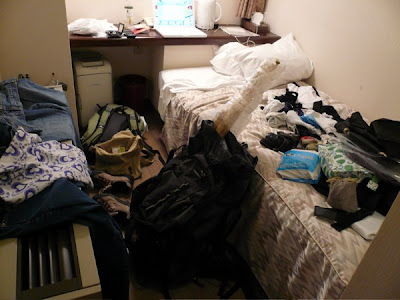 Tomorrow….ah, Tsurunoyu Onsen. Extended bathtime, here I come.
Posted by Tessa at 11:21 am