Me, and my motherfucking heels

I don’t know why, but I felt I had to make a bit of effort for Donburacon, a cruise and dinner around the harbour. I should have stuck with my usual total lack of inclination to dress up. But, dress up I did, and made the hike from hotel to pier in heels. It wasn’t so bad. Not yet, anyway. (Cue drums of impending doom.)

The cruise ship, while having three floor of seating, was packed to capacity. I was among the last on, by which time there was no where to sit, and not much food to be had. I scrounged a tiny and lacklustre plate of spaghetti, and retreated to the Royal Room, which had no food, stage, presentation, but a whole lot of couches and no one else, which was fine with me.

After a slight delay due to someone falling sick and being carted off in an ambulance, the ship left the dock. I’d long finished my dinner, so snuck outside on the walkway, and that was lovely. 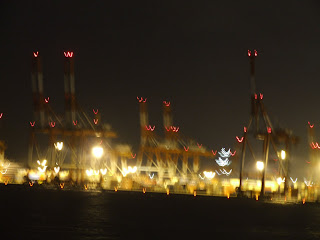 The heat and humidity has vanished the last two days, and the night sea breeze was just delicious. It was quiet. Gulls flew along side. The harbour and city lights were so very pretty. Maybe I was greedy, keeping that to myself. Others found it soon enough. Somehow, I ended up pinned in a one-sided conversation by a significant name in the science fiction field who will not be named because I’m pretty sure I have the names of about three science fiction writers confused. Said conversation was largely about how big and strong and unstoppable America was, and how Australia was fine, if ever anyone attacked Australia then America would just blast them, and you know, the only reason the Indonesians stayed out of East Timor when Australia was doing all the dirty work was because the American fleet was just off the horizon, and between the Australian and American Navys, no one could try anything at sea, ‘cause we could just blast them, and a whole lot more that was even more unpalatable. That’s probably enough to name him. I could have lived without this conversation, although it wasn’t without entertainment value. 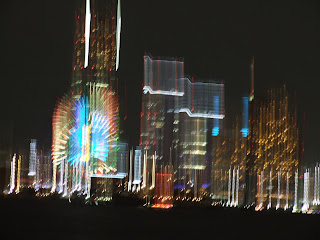 (so I did this on purpose.)

This was offset by a great conversation with Eileen Gunn, who is a lovely person. I admit, most of the time, I don’t like talking about writing. Wrestling with identity and expectations, and I’m not particularly clear what my stance is on writing, or why I do or don’t do it. It was good to talk shop with Eileen though, perhaps because she appears to wrestle with ‘should’ as well.

At this point, I’d either been walking or standing for a couple of hours, and my feet were not happy. The party floor was vacant when I poked my head in, so I figured I’d head back to the hotel. My good, my feet are fucking mauling me. They’re like lions, and they’re attached to the bottom of my legs, just mauling me. I’m lying in bed, and they’re mauling, chewing, hurting like two great hurting things.

Japanese TV is proving addictive. Inability to comprehend a word is irrelevant, it’s interesting to see what can be understood without language. I have no idea what I’m watching now, but it’s hilarious. This morning, I had the delight of watching (and this is totally misspelt) Tengen Toppen Gurren Langen, as a Sunday morning cartoon, and then calling my brother to tell him this, as he’ll have to wait a couple of days for the fan subs to be released. Sometime yesterday, I was watching a drama concerning a Mary Sue. I knew she was a Mary Sue, because she was very pretty, everyone loved her, and although she was in every scene, she barely said a thing. Every other character carried the story. 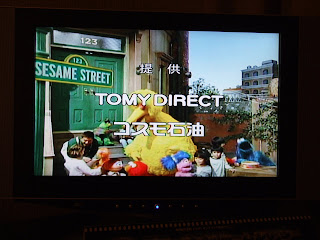 Wait, I think I’m watching a spoof of flight school. The Captain is training his cadets by making them ride bicycles with wings and fuselages attached. And he’s just gone running off really fast again.