The Matsushima Bay area isn’t large, and last night’s walk didn’t take long at all. I ran out of town and shoreline to explore quickly, and ended up just strolling back and forth, turning random corners, and not paying a lot of attention to where I was going. A lot on my mind. I knew I should eat, but I didn’t want to stop walking.

A little lady outside the restaurant Ishida-ya took advantage of my aimlessness, and directed me inside her shop. At that point, I had no will power, and would have gone into a room full of rabid vampire kittens if a yakuza boss had gestured for me to do so. She sat me down, gave me an English menu, and after bringing my meal of unadon, left me alone. With each meal, I find I eat slower, and slower. They had no other customers, and I was grateful for the quiet.

I wandered back to my ‘resort’ hotel. Those in rooms with views of the harbour were out on their balconies in their yukata. There isn’t much to see of the bay at night. My own room has a great view of the parking lot.

I had a bath, but it didn’t settle me. The TV only picked up two channels. I watched some sort of game show, in which various TV celebrities were given all sorts of bizarre challenges. One of the main guests was none other than the actor who played Pigsy, in Monkey Magic. His face has deeper lines, but hasn’t changed in the slightest, and I recognised his mannerisms. 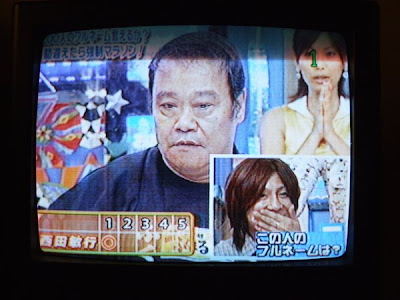 That didn’t settle me either. I just didn’t sleep.

Breakfast was included in the room price, and was better than I was expecting. There was a decent buffet. I stayed away from the ‘continental’ foods, which are strange and not quite right, and had myself vegies, tofu, omelette and salmon.

Checked out. Investigated the Fukuurajima Bridge. There was a big sign out front, stating a ‘toll’ was necessary. I did not tell the lady taking the toll that my bigger billy goat brother would be along after me, and was much tastier. 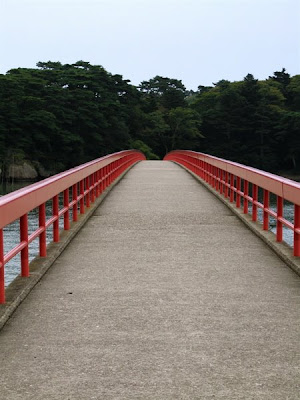 The bridge is over 200 metres long, reaching over to a small island on which is a couple of pavilions and lookouts amid the gardens. This early in the morning, the weekend visitors hadn’t invaded, and I largely had the island to myself. It was a nice quiet stroll, broken occasionally by the honk and loudspeaker announcement of departing sightseeing boats. 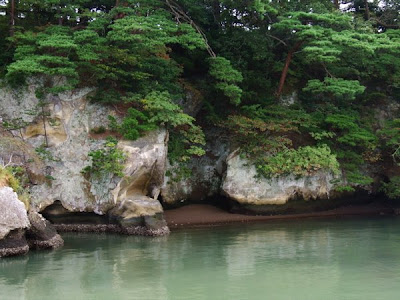 There were fishermen working beside the bridge. I’m not sure what they were doing. Nets were stretched out on the surface of the water between bamboo poles, which they fed over their boat. I think they were checking the nets for damage. 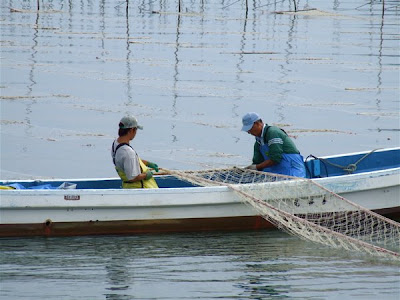 I followed the flow of foot traffic to the jetty from which all sight seeing boats depart. The ticket counters were many, with no obvious route maps or English. I went with the first attendant to direct his attention at me, jabbering away in Japanese despite my totally blank face. I just paid the 1400 yen, and went to the jetty number he told me. 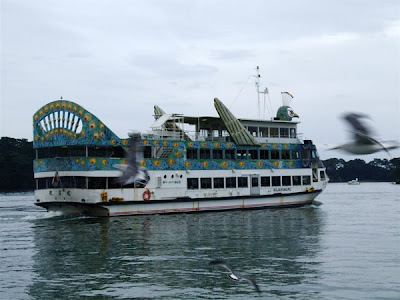 (Most of the cruise boats were similarly, er, decorated.)

Matsushima Bay is gorgeous. The great poet Basho is said to have been so struck by its beauty, that the first time he viewed it he could only cry, “Matsushima! Matsushima! Oh, Matsushima!” 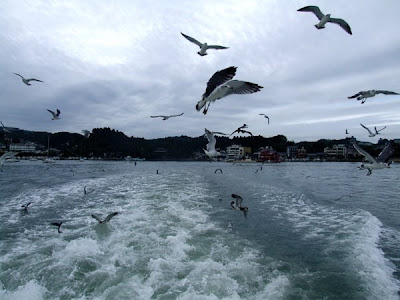 You will find your appreciation of this natural artwork is diminished if you’re crammed in with the weekend visitors, who, for some bizarre reason, are more interested in feeding the bloody seagulls than enjoying the scenery. You will find your view of the bay and islands is obscured by silly twats throwing chips overboard, and by the swarm of flying rats who just won’t bugger off. Seriously. Seagulls. Not that cool, you know. 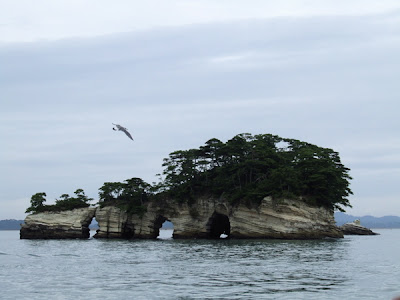 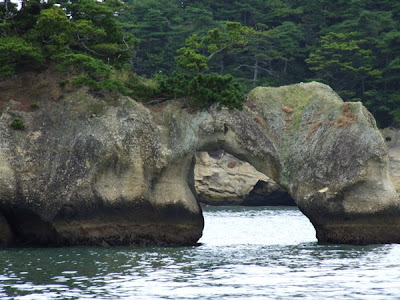 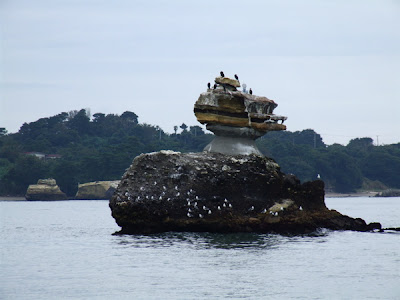 (The bay is full of such interesting outcroppings, but unfortunately all my photos are terrible due to the bland overcast sky and the number of seagulls swooping into frame. Not kidding.)

A lovely place, but I’m worn, and don’t have the same patience I should have when it comes to other people.

The LP mentioned a boat from Matsushima to Sendai, which I thought would be a nice way to get back to the station, but the woman at the information desk indicated otherwise. There are boats that travel near to Sendai, but still a fair distance away. Skip that.

I wandered into Kanrantei, a guest house given to the Date clan by Toyotomi Hideyoshi, and moved to an outcrop on the shore. 200 yen admissions for a very small museum, which I wasn’t that interested in. Instead, I ordered a cup of green tea and a bowl of sweet bean soup with glutenous rice balls, and sat in the tea room looking out into the bay. This far up north, with October arriving tomorrow, it is now cool, and the warm snack went down a treat. The tea house staff cast me looks, for sitting there so long. 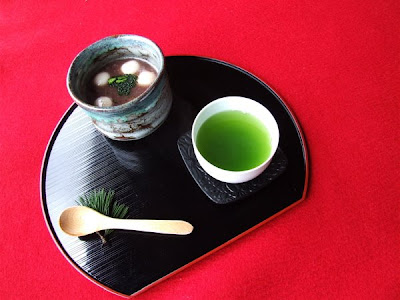 The right train station and the right train track, and now I’m at Sendai, awaiting the shinkansen to Morioka.
Posted by Tessa at 3:08 am