Whoa, so much to back track.

I didn’t have raw horsemeat or vegetables for dinner. I found a bar called People’s, which allegedly provided internet access on request, but it was the bar’s one day off. Go figure. I settled on a place called ‘Buns’, which was largely empty, served me a weird funky tasty seasoned cod roe pizza, and left it at that.

The disadvantage to staying in tiny little wooden ryokan that are over 100 years old is that they creak just like a building over 100 years old should. When I got up in the middle of the night to go to the toilet, everyone in the building knew about it. It’s possible the neighbours did to.

The other disadvantage is that things get worn. The futon was very thin, as was the pillow, and I have too much hip and shoulder to be comfortable lying on my side without some cushy stuff underneath me. This gave my insomnia a boost.

Why the hell do I have insomnia anyway? I’ve been running around like a headless chicken every day, getting far more exercise than I normally do, I should be sleeping like a log. Maybe I’m just wired.

I left early the next morning, as I planned to go to Murodo, a plateau in the Japan Alpine National Park. To get there, I had to take a train to Shinano-Oomachi station, and from there the trans-alpine route.

First hitch came about when I went to reserve a seat to Shinano-Oomachi. The clerk wouldn’t let me on the 9:10, and gave me a seat on the 10:27, which was a much later start that I wanted, but oh well. In hindsight, I now known that the 9:10 didn’t require reservations at all, as it was just a local service and I could have merely walked on. Dammit.

There was a table set up right that the exit of Shinano-Oomachi station to buy passes for the Trans Alpine route, which saved me wandering about. The return pass to Murodo was 11200 yen, which isn’t cheap. They gave me a sheaf of tickets, and sent me to the bus stop. I don’t know what it is with the Japanese giving out tickets to get tickets. I gave the first to the bus driver, who went as far as Ogizawa station.

From Ogizawa, it was a trolley bus in a tunnel through the mountain to Kurobe Dam. At this point, the sun was out and the sky was blue, and the dam was pretty impressive to behold. There was a lot of stairs involved, for some reason. The walk across the dam was pleasant, the water a fabulous jade colour, and the alps were so very green. 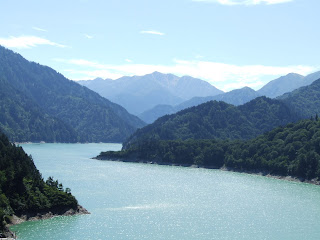 From there, a trolley lift thingy up through the mountain, followed by a cable car from one peak to the next. That was great. Australian needs to get itself some real majestic mountains. 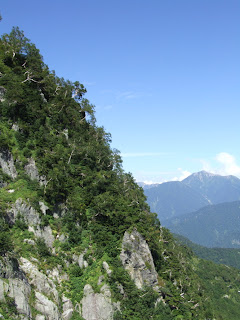 At the top, yet another trolley bus and finally, we were at Murodo plateau, after a bit over 3 hours of travel. 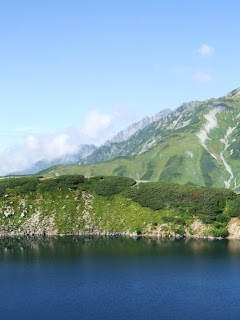 Thanks to my late start, I only had a bit over an hour to walk around before heading back, in order to get the last bus back to Shinano-Oomachi. The air up there had that fresh, clean and cool feel that mountain air does. From memory, the altitude was approximately 2500m above sea level. I took at quick stroll around. So high up, I was still surrounded by peaks looking down on me. At this time of year, it was green as far as I could see. Too early for autumn leaves and too late for flowers. The ground birds that are meant to live there all year round were being coy. The ponds were deep and still and peaceful. There was a sulphur vent area that I started to head towards, but even from a distance it smelt bad. Really bad. Worse than Yellowstone. My nose decided it didn’t want to go any closer. 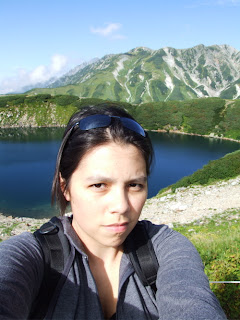 (Some stupid mole jumped in front of my camera right as I took the shot.) 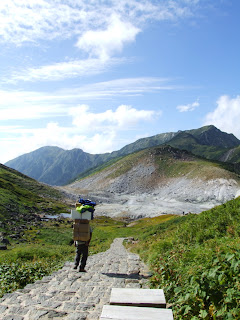 (I don't know what was in all those boxes, or why he was taking them down to the sulphur vents, but he wasn't having a good time.) 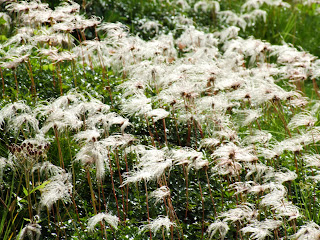 And so I started the trip back, etc etc etc. The train back to Matsumoto was a normal local train, and took much longer than the express. It was about 8pm by the time I left the train to the cry of “Matsumotooooo!” and I was knackered. I settled for a small bento set, and admitted the day had defeated me.

Overall, the most unsatisfying day yet. From what I saw, the park is spectacular, and definitely worth exploring. The Trans Alpine Route is not the way to do that. It’s a lot of money for very few glimpses of the scenery. Each leg of the journey was punctuated by at least a 20 minute wait before the next leg began, with attendants telling us not to queue up and wait, but go and look in the souvenier shops. It didn’t take much for that to get very annoying. Unless you’re actually using the route as a means to get from A to B, give it a miss. Blerk.

My mood probably wasn’t helped by the fact that my tummy has been playing silly buggers for a couple of days. This sudden all fibre and seafood diet is messing with my stomach, methinks. Oh, vegetables.

And despite being knackered I didn’t sleep.

This morning I fought with my alarm before rolling out of bed, finished packing, and checked out. All the Marumo staff speak English, so what with the rain, I was able to request a taxi to the station. I found Vie De France, a bakery chain I’ve seen a few places now, and they had salad sandwiches on pita bread! Hell yes. They also do a really good egg custard bun, but their orange juice has a weird uncooked dough aftertaste.

The train from Matsumoto to Hachioji was a limited express, and I’m glad I had reserved a seat on this. There are carriages set aside for unreserved seats, but they’re constantly packed from what I can see. I had the carriage largely to myself, and dozed off.

The mountains were growing clouds. Tendrils and wisps reached up from the trees, reaching for the real clouds skimming the peaks. This wasn’t just for the morning, or the Matsumoto area. It was everywhere.

At Hachioji I swapped to the JR Yokohama line, and got on a local train to Machida. I misunderstood the conductor though, and got off at the first stop, not the tenth, so did a bit of unintentional train hopping. No big deal, it was just a bit of a pain lugging my rucksack around.

From Machida I switched to the Odakyu line, which the JR pass doesn’t cover, and went as far as Odawara. At Odawara, I bought a three day Hakone Free Pass for about 4500 yen, which gives me unlimited travel on all the transport in the Hakone area, starting at Odawara. From Odawara, a quick train ride to Hakone-Yumoto, and the Tessa had landed.

Except I had no idea where my hotel was.

A brief jaunt up the main road indicated that the tourist information centre was not where the LP guide indicated it was, so I shrugged and caught a taxi. The driver also had no idea where the hotel was, but fixed this by just ringing them and getting the address. It wasn’t far from the station at all, but I know I would have never found it on my own.

I’d forgotten I’d made a point of booking myself somewhere nice here. I’ve become used to tiny rooms and shared amenities. Oh my. I walked in and wondered if I’d made a mistake, and maybe there was another person with my name who just happened to make a booking for the same dates and same hotel.

There is a little entrance lobby with shoe racks and a mini bar. My very own private toilet, which is, I might add, separate from my very own private bathroom. A huge main room, with a huge table, TV cupboards, and then, yes there’s more, a sitting room with floor to ceiling windows that looks out into a garden! And a little stone zen garden in the corner! It’s utterly ridiculous, it’s fantastic! I could do cartwheels in here, if I could do cartwheels. I now understand why some people go on holiday and just stay in their hotel for days on end. I’m tempted to. 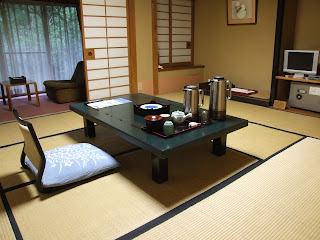 But no, I am a good traveller, and went straight back out to explore Hakone-Yumoto and at least find my way to the station again. As it is, Hakone-Yumoto doesn’t take much time to explore. I forgot to take a camera with me, but there is one seafood shop that has enormous wooden tuna and lobster plastered to the front second story. I swear, this country is trying to kill me. Every second shop was selling freshly baked and steamed red bean cakes. I don’t want to OD on red beans though, so I bought some crackers instead. Mighty hard and tasty, they are too.

I think I’ll stare at the garden for a bit, and hope that the rain lets up before I go out for dinner. I saw a great looking sushi place on the walk back. There are numerous baths in this hotel complex thing. Might have to check them out too.

This place just makes me laugh.
Posted by Tessa at 6:22 am