It would have been cheaper to eat elsewhere, but there is something nice and relaxed about getting up, having another luxurious bath, and then just trotting down stairs to have fruit, toast and an egg served. I was sorry to check out of Turtle Inn, it had a lovely atmosphere. And bath. Ahem.

I decided to take a short walk along the river, to Bakejizo, which is a stone garden featuring many buddhas. Many. Again, all over-grown with moss, and this time they were wearing red woven hats and bibs. I’m not sure what the hats and bibs signify. It was cool in the shade by the river, and there was no one else around. 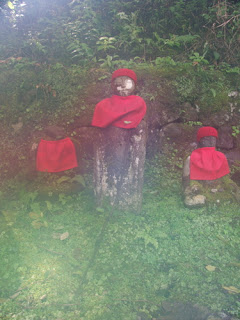 (It was that warm and humid the lense fogged up as soon as I took the cap off.)

From there, I caught the bus back to Tobu Nikko station, and because the train to Asakusa wasn’t due to depart for another two hours, decided to jump on the next train to Shinjuku. This is a JR train, and cost 3900 yen, which I could have done without, but oh well. A woman with a trolley just went past, selling beer and ice cream.

There is blue sky and sunshine at the moment, a rare sight so far on this trip. I imagine by the time we’re back in Tokyo, it will be replaced by the grey featureless haze of humidity again.
Posted by Tessa at 1:04 am