The part of me that indulges in entirely illogical thoughts is currently labouring under the belief that I only have a set number of nights of good sleep that I can use during this trip. I don’t know how many of these nights I have, but I think I just wasted one.

A backlog of exhaustion and insomnia finally kicked in, and I slept deep and long last night, rare even at home. I woke feeling refreshed and ready to take this funky country on again. Bring it, I say, bring it on.

(Apart from the nasty dream about being trapped in the sewers with zombie monsters, a torch with a failing battery, and rising water. That’s not cool. At some point I’d switched to third person omnipresent, and was watching a bus that was being abandoned. Zombies were just sitting in it, because, er, I don’t know, but people who had been bitten were tied to the bars inside that bus, left to die. The bus was caught in a flood of water, intended to drown the zombies (now there’s a stupid stupid stupid idea, zombies don’t drown), and these people could do nothing but stand there as the water poured in.)

Everything opens late on a Sunday, so I went without breakfast and walked to Kencho-ji. It was another stinking hot day, but I was a bit more prepared for it this time, and at that time of morning there was still plenty of shade on the streets. Kencho-ji is just up the hill behind Tsurugaokahachimangu. Although there were already people setting up shop for the yabusame (horseback archery), I figured it would be a shame to have spent three days in Kamakura and only visited Hachimangu and Kotokuin. Kencho-ji is ranked first among the Zen temples of Kamakura, and is a working monastery. It was relatively quiet there, with the morning crowd pretty thin, and I was able to stroll around the grounds at my leisure. One of the halls had an idol of an incredibly emaciated man, sitting in mediation, his head backed by a disc. His stomach had shrunked deep away into his body, and his chest was skin stretched over ribs. He left me feeling slightly unsettled. 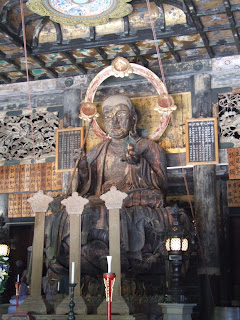 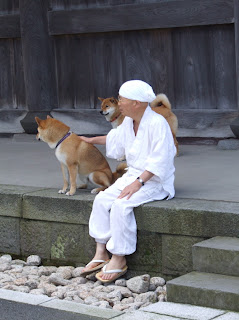 (A monk and his dogs. These dogs are pretty common, and weren't very happy in the heat.)

Behind the main hall was a tiny zen garden, where French tourists took photos and talked loudly. It’s funny, in America it was impossible to escape the German tourists; here, it’s the French.

I walked back to Hachimangu, and, wow gee golly. It was still an hour and a half till the event was supposed to start, and the track was already lined thick with people staking out their spots. I had intended to eat first, but I figured I should probably do the same. Mistake number one.

I managed to squeeze into one of the spectator areas, and even got myself something to lean on in the shade, which made my spot pure gold. Even better, I fell into a conversation with the people beside me, who turned out to be from Newcastle. They’d just finished a trip around Canada and Alaska, and were stopping in Japan on their way back home. I got that conversation in English I wanted, and more. Thank you, J and W!

There were seats on the other side of the track, which you could actually reserve and get a great view from. If I’d known, I’d have bought three, just for me.

An hour and a half passed, and the event began.

The ceremony of the priests and archers meeting and doing what they do, that began. Far away and out of sight, while the announcers broadcasted the history of the city, shrine and ceremony in Japanese and English. The English translation surprised me. I didn’t hear that many English speakers about the place, they’d have done better in French or Mandarin.

I finished my water. Er.

I started to feel queer, and didn’t like the idea of hanging around another two hours without water, but I knew if I left, I’d never get back in. J kindly gave me some of his water, which turned out to be a very bad move, because when you’ve dehydrated that badly without noticing, a hit of water makes your body go fucking wrong, and I blacked out.

Fuck. Seriously. That’s the second time I’ve keeled over from dehydration this month. You’d think I’d fucking well learn. I mean, I had water! I’d been drinking all day since I knew I was sweating up a sea. I’d even bought myself drinks, those horrible sports drinks to replace the stuff you’ve oozed out your pores. Apparently, not enough.

These black outs only ever last a couple of seconds, but it takes a while for my brain to start working again. First to come back is hearing, actually, that never goes away. Second is sort of sight – I became aware that I was looking at the ground and people’s shoes quite closely. Then, wits start to return. I stood, but I still couldn’t see properly. It’s hard to describe what it is to have eyes open without being able to see. Everyone was yammering away at me, and even though I couldn’t see properly and didn’t have enough control over my limbs to take a step forward, I could say “o-mizu, kudasai,” and ask for water right away. Haha! Go brain, go!

I crushed some poor police officer’s hand to death as I tried to not to black out again. It doesn’t take long for me to get back on my horse, but it’s hard to do when no one will leave you alone. Abruptly, everything clicked back into place, and I climbed over the barrier and was taken to a hut where they sat me down and put ice on my head. Despite the fact that I kept asking for water, they seemed to believe it was the heat that had knocked me out. My phrase book does not have the Japanese word for ‘dehydration’.

So, if you’re ever in the situation where someone around you has fainted, know that you need to not ask them questions for about a minute after they come around. It’s distracting, and can be a bit of an overload on an already overloaded system.

Thank you the Hachimangu monks and police officers who came to my aid. Sorry for being an idiot. Sorry for crushing your hand.

After sitting quietly in the cool for about ten minutes, and being given several cups of ice tea, I felt normal again. I’d lost my spot, and even worse, my Newcastlians, but I slunk out behind the press area just as the yabusame was starting.

I didn’t have a good view, being obstructed by the huge protective shield behind the first target, but it was quite impressive. The archers were decked out in full traditional gear, with gorgeous fabrics, leather-worked quivers and horse tack, and lacquered wicker-work hats. Most were quite moderate, cantering down the track to fire when about level with the target. I don’t think anyone hit all three targets. Some, the crowd pleasers, came tearing down at a great rate of speed absolutely shrieking and howling their heads off, which greatly amused me. I was particularly fond of the last archer, who was quite and sedate and wearing glasses. 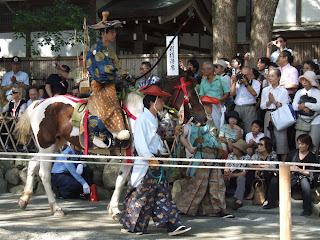 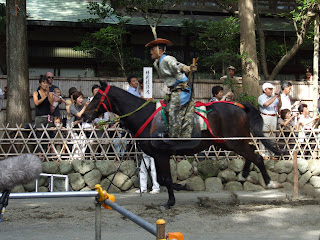 But, after only half an hour of standing, I started to feel queer again, and snuck off to find a drink. There was a stall selling shaved ice cups with syrup, and that held me up through to the end of the yabusame.

The queerness kicked in again, and this time I figured it was more to do with only having eaten a small packet of rice crackers all day, which no amount of water guzzling was going to change. I sat down outside the first restaurant I found…and failed to get in because I didn’t realise you needed to write your name down on the board outside, and after twenty minutes when the people behind me were called in, I gave up. The sit down had recuperated me somewhat, so I started to walk back to the hotel. In the end, with all the restaurants being full to the gills, I decided not to wait for a table. A bento set for the third night in a row for me.

I still feel decidedly wobbly. Not off, just a bit delicate around the edges. Another early night for me. Kamakura, I wish we could have had a better time together. I rather like you, but I’m never visiting you in September again.
Posted by Tessa at 7:38 am