I’m getting worse at getting up. Worse than usual, I mean. Now I’ve taken to setting my alarm two hours before I need to actually be out of bed, and hitting snooze over and over. What can I say, it takes me a while to reconcile myself to the idea of being awake.

This morning started with a stroll through the riverside market. There are two morning markets in Takayama every day. The one by the river is the larger, although that doesn’t mean it is big. Most of the stalls were locals selling local foodstuffs. I so wish I had the ability to ship all this food home. It all looks fantastic, but as a traveller I just don’t have the means to do anything with it. 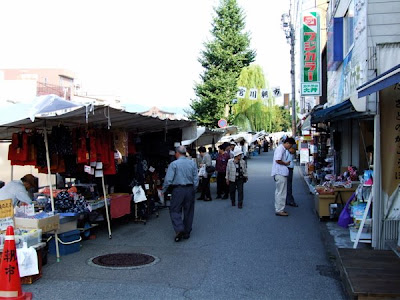 An elegant woman accosted me as I sat beneath a tree having a drink, asking if I was from Thailand. When I told her I was from Australia, she went on to ask if she could have an English conversation with me. My paranoia factor rose by several degrees of magnitude, as requesting to practice English is a pretty standard scam opening in most Asian countries. But no, she did just want a short conversation in English, in which she asked the usual tourist questions, and then gave me a brief run down on the attractions of Takayama. She went on to point out one of the float houses on the street, before bidding me good morning, and going about her shopping. 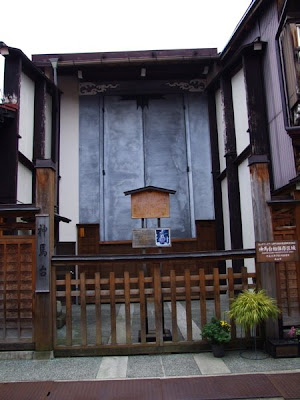 There are many float houses scattered throughout the town, housing the enormous two- three-storey floats that are pulled out and paraded around for the spring matsuri. None of them are on display, but they’re quite elaborate from the pictures, most of them with clockwork moving puppets.

Breakfast was a bag full of little fish-shaped red bean pancakes. Best thing about being a supposed sensible grown adult travelling alone is that no one can tell me that isn’t a simply smashing breakfast.

I walked to the second market, much smaller, and situated outside Takayama Jinya, a local government office set up by the Shogunate. Many such offices were used throughout the Edo period, but this is the only one left standing.

I have to say, the paper-pushers of the Edo era worked in much nicer offices than I currently do. Although they didn’t have air conditioning or heating or computers, so I probably shouldn’t complain. 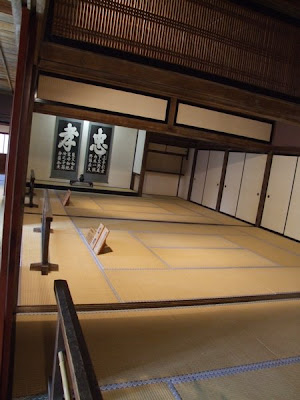 (The carpet in a 24 hour office is disgusting. I don't think the tatami mats would do well at work. Still, it's a much nicer atmosphere than the cubicle farms.)

There was an English guide available when I entered, so I was given a thorough tour of the premises. Having all the little details pointed out, and someone to direct questions to, was most excellent. I was particularly fond of the kugikakushi, which are decorations designed to hide the nail heads in the walls. These ones were rabbits (this area has an obsession with rabbits). I’ve picked up from all the rabbits all over Japan that it is a favoured animal, supposed to be lucky, but in this particularly case, is meant to be good luck against fire. A good charm to have in a wooden building. 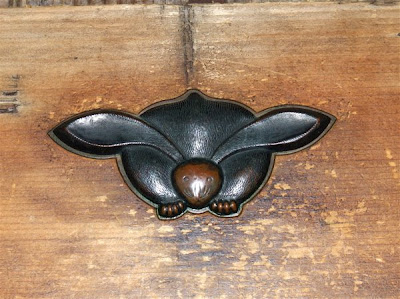 The use of each room could be somewhat deducted by looking at the tatami mats. If they had decorated borders, then they were probably for the head official’s use, black borders indicated lower ranked officials, and a lack of borders entirely meant the area belonged to servants. 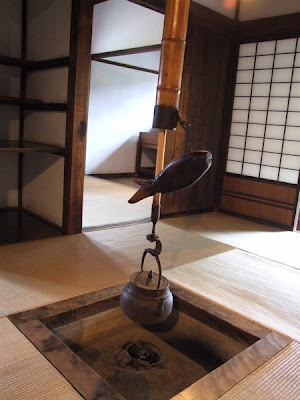 (I was quite taken with this simple set up for raising and lowering pots over the fire, with the wooden fish acting as brakes.)

There was a very simple court room which doubled as a torture chamber. The instruments on display were very straight forward; the victim was made to kneel on a sharply ridged slab of wood, and then blocks weighing about 40kg were placed on their knees. Ouch. 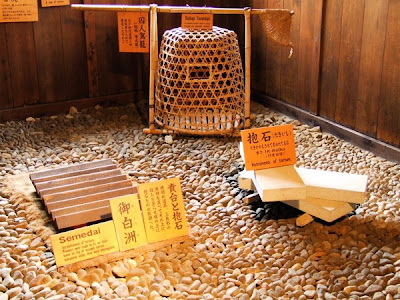 From there, I headed to the station. The staff at the tourist information office directed me as to which bus to use for the Hida-no-Sato (Hida Folk Village) and what ticket to buy. I had some time before the bus left, so I also reserved my train seats for tomorrow. Getting in early for window seats is way important, hai.

The village was in walking distance, but far enough that I was pretty sure I’d get lost if I tried to find my own way. The bus was the much simpler option. It dropped me off at the entrance.

Hida-no-Sato is a sort of museum/amusement park. With the westernisation and progression of Japan, a lot of the old lands were lost due to the building of dams. Takayama city took it upon itself to preserve some of these old farm houses, and so rescued whole buildings from destruction, moving them piece by piece to this village. They’re good, walk-in displays. A lot of focus was given to the various roof styles used, which seemed to depend on how much snow a roof was expected to support. Some buildings claimed to have been able to support two metres of snow in winter. Yikes. That’s a lot of snow. 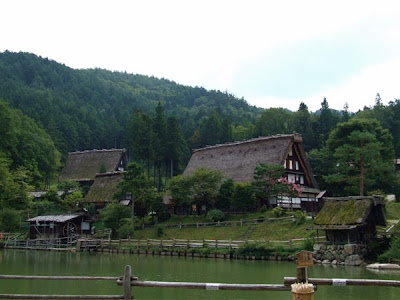 (Across the pond. Just out of shot is a family having a cheesy photo taken, parasol, straw hat and all.) 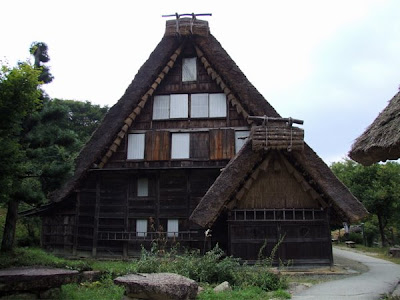 (That is a thick-ass roof. Serious business.) 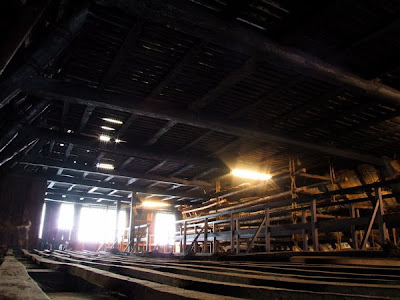 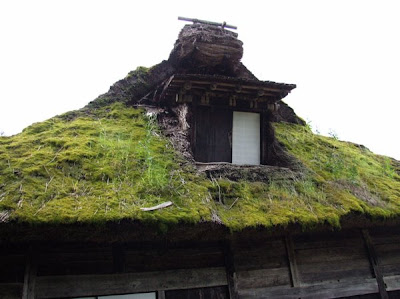 (Yeah...don't let your roof get like that. Also, I loathe the perpetually overcast sky. It isn't even an interesting cloudbelly.)

One house used to belong to a priest, and beside it was a large bell, with a log and rope all set up for ringing. Hell yes I gave it a ring. The ‘doooooong’ was magnificent, and it shivered under my hands for a good two minutes afterwards. 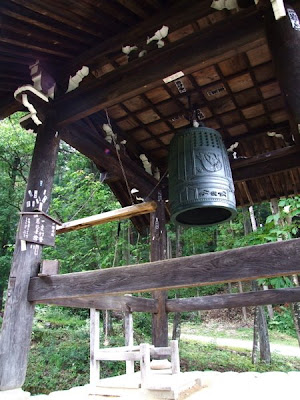 Unfortunately the more interesting section of the village was largely closed. There was a group of houses for local artists to work their craft in view, such as weaving, wood working, lacquer work and so on. Only the woodworker was present when I visited. Possibly the huge mob of school children scared the others off. 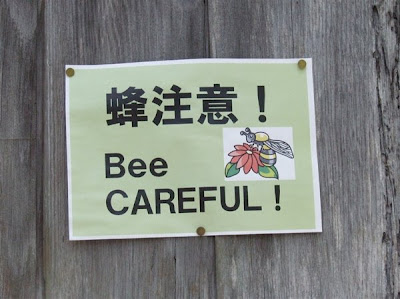 (Heh. Deliberate play on words. I didn't see any bees.)

A bus back to the station, and headed back to the ichi- ni- and sanmachi street area, where all the buildings are beautiful old wooden creatures, settled in place and comfortable. I found a little restaurant, and had cold soba noodles with dipping sauce and vegetables. Actually eating lunch is a hell of an achievement if you ask me. Someone give me a prize.

I walked to Shishi-Kaikan, which I’d heard was a museum of lion heads, used in another matsuri of Japanese lion dancing. The section housing the heads was actually very small. There was no English signage, and given the minimal Japanese signage, I think they only provided the names of each head. They’re not lion heads like I know them. Each is a solid block of wood, sometimes with ears or jaws that move. Most are unpainted.

There’s a small token museum housing various artefacts, which is nothing you won’t see in every other museum in the country.

However, included in the admission price is a puppet show, put on twice hourly. These puppets are clockwork powered, and are called ‘karakuri’. According to the pamphlet, a watch belonging to Tokugawa Ieyasu needed to be repaired, and the repairman was so fascinated by the watch’s inner workings, that he copied the basics and created these puppets. They were fantastic! They utilised not just the power of springs for fast and strong movements, but very cleverly designed sets as well. The acrobat impressed me the most. You wouldn’t think a puppet could be a trapeze artist with no puppeteer obviously holding it.

Two women stood at the ticket office before me, accompanying two much, much older women. Maybe mothers, maybe grandmothers. A little senile, prone to wandering and clapping and random bursts of song. These two old dears, they loved the puppets even more than I did.

As I was in the area- wait, that’s misleading. Takayama is small enough that everything is ‘in the area’. Anyway, near Shishi-Kaikan was Kusakabe Mingei-kan, an old private merchant’s house that has been restored and preserved as an exhibit. It’s quite the mansion. No English signage, but most of the displays are pretty self-explanatory. Included in the admission price was a free tea service, which is a pleasant interlude in the court yard. I saw three separate gardens for this one house. That’s what you can afford when you run a money-lending business.

After that, I just wandered the streets like a dog that doesn’t know she’s lost, because there are too many new and interesting things to sniff and paw at. I love this little town, I do. I don’t know that it has more than two, maybe three, days of things to do, but what it has is what I want. I will return.

This is now that dead hour between everything closing and it not quite being dinner time.

There is a sharp distinction between feeling like you don’t belong, and knowing that you don’t belong. The former is unpleasant, impossible to quantify or dismiss, and every day. The latter is being an obvious foreigner in an unknown land, knowing there is nothing you can do to change this, and is strangely, breath-takingly, liberating.
Posted by Tessa at 6:53 am