I’m glad I reserved my seat on the train to Matsumoto, as the unreserved cars were packed when I went past. The trip, aside from being train sick, was full of green lush mountains and low clouds. There are little towns tucked in all valleys, and rice paddies everywhere. It was a stress free trip, as I didn’t have to change trains at any point, and felt safe closing my eyes and concentrating on not up-chucking.

The instant I stepped out of Matsumoto station, I felt better. No, better isn’t quite the right word; cleaner. The streets were wider, cleaner, the buildings shorter to reveal a larger sky, and the city in general lacked that hyper-tension that Tokyo thrives on. It was a quiet Monday lunch time.

My ryokan was located in a side street between Nakamachi-dori and the river, and for a change was easy to find. The signs were all in hiragana, but I’d suspect they might be, and was prepared.

Oh, this place is lovely too.

I thought I was far too early to check in, and had only intended to drop off my bags before investigating the town, but the gentlemen at reception would have none of that. My room was ready, and he carried my bags up for me, which was just such a nice thing to do I could have kissed his feet. I think this whole building is cedar, because it smells divine. My room is a six tatami mat room, which I think overlooks the river, but I can’t tell because there are four layers of window to open before being able to see anything, and given the way all the sliding doors and windows have got stuck so far, I’m afraid to try. I like the paper screens anyway. There is even a little bamboo garden in the centre of the lobby. 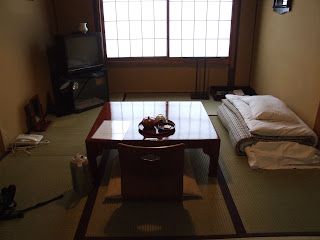 Mr gentleman was very courteous, and we had a nice chat about Australia. Apparently he’d spent a year travelling pretty much everywhere, from the sounds of it. Except for Broome. I didn’t want to tell him he’s seen more of my country than I have.

Having sorted my bags and my room, I set out for Matsumoto-jo, the town castle. Except there were many little interesting streets full of many little interesting shops, and I am easily distracted. There is so much beautiful pottery around here; I want to buy some for home, but I don’t want to carry pottery around in case it breaks, and I don’t want to put it in the mail either, because that would practically doom it. 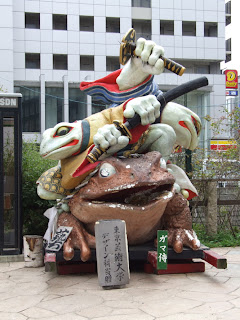 (Battletoads! Found in a random side street by the river.)

I made it to the castle eventually, and sat in the park looking over the moat, and admired it. It is called the Crow Castle, given all the black workings it has. I imagine it has great foreboding when it wishes. This castle, unlike most castles in Japan, is not a replica, but the original, and is well over 400 years old. It has outlasted earthquakes, fires, storms, and wars, and I think it has a right to strut its stuff. It’s a handsome castle, it really is. 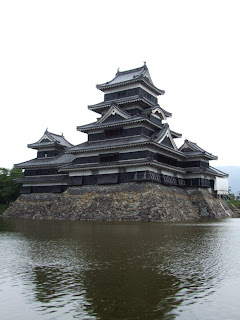 (Castle! And blogger just had a processorfart and doesn't want to upload any more images.)

Most of the wood is original, and is worn smooth and shiny from all the hands and socks that have touched it. It’s quite dark, as most of the windows are designed for defence, to be shot out of. The six floors were divided up for defence, storage, conferences, chilling, and viewing the surrounding land. There were nooks and incredibly steep stairs (at an angle of 61 degrees) everywhere. Even the flood of school kids didn’t interfere with my enjoyment.

Housed in the castle was a display on old firearms used in the castle’s defence. Matchlocks for the most part, and some of them were beautifully wrought and decorated. Others were for use and only use, and looking at them, I’m pretty sure I wouldn’t be able to get them off the ground.

There was a moon viewing pavilion attached to the castle, a later addition during peaceful times. It looked good, but was cluttered and scaffolded for refurbishment.

I don’t think the other castles I intend on visiting will compare to this. Once I’m a rockstar writer god, I’ll have a castle built of wood as well, and it will make noises and smell delicious just like that one did.

Alas, Matsumoto isn’t the most happening of towns, and shops were shutting up at 4pm when I went strolling about again. I’m just killing time now, until it’s time for the feeding holes to open. I made the mistake of trying the green tea which had been left in my room – it smelt great when dry, but with water added smelt like not so great vegetables, and tasted worse. There was something accompanying the tea which I thought might be a sweet to offset the bitterness, but I’m not sure. It was a bit like chalk, and a bit like soap, and no, I didn’t eat it.

Apparently one of the local specialties is basashi, which is raw horsemeat. I’m game, but I think I want vegetables more. Oh, decisions.
Posted by Tessa at 7:43 am