Insomnia hit ridiculously hard last night, and some time after one in the morning I gave in and took a sleeping pill, which only knocked me out till five. This is dumb. All the exercise I’m doing, I should be sleeping like the dead. Why the opposite? I don’t have time to be tired.

The washing I did yesterday was dry enough to be moved and just dumped on all available surfaces, so I did another load in the bath. After writing this, I’ll go spend some quality time with it and the hair dryer.

This time, I was aware it was Saturday, and went the post office first thing, while it was still open. Stamps bought and mail sent, hurrah!

The information kiosk told me I could catch either the number 1 or 6 bus to get to Kotokuin Daibutsu (the giant buddha). There is a hiking course from one of the temples that ends at Daibutsu after a couple of kilometres that I was intending to do, but it was way too hot. Fuck Tokyo and it’s humidity, this was the sort of heat that is so powerful it’s like a Super Saiyan Falcon Punch from the sun. As I was already running on only four hours sleep, I figured some laziness was in order.

There was a fair wait between buses, having just missed the number 1 when I rocked up. No hassle for me, but for another tourist, who spoke a European language I couldn’t quite identify, well, the wait was just too long. He wasn’t at all comfortable with the situation, being in a stranger place with an unfamiliar language and that air of tension that indicated he was waiting for something to go terribly wrong. He paced, checked the time, checked the bus time table, checked the other bus stops, checked his map, and made several phone calls asking for directions. When the bus finally came, I told him straight out that it was going to Kotokuin, and the fare was 190 yen. He followed me like a CIA agent up to the admission gate before disappearing. I guess he felt comfortable, being where he was supposed to be.

Kotokuin was quite impressive. He is- actually the summary on the back of the ticket says it best, so I’ll just copy it.

“This bronze statue of Amita Buddha was cast in 1252 AD by the sculptors Ono-Goroemon and Tanji-Hisatomo at the request of Miss Inadano-Tsubone and Priest Joko, who not only originated the idea of building this large statue and the temple covering it, but also collected donations for it.

In 1498, a tidal wave swept away the great temple of the Buddha, leaving only the foundation stones. In the 500 years since then, the holy statue has been exposed to sunshine, storms and snow.

The latest repair was done in 1960-1961, to strengthen the Buddha’s neck and to make it possible for the Buddha’s body to move freely on the base to prevent a damaging shock to the statue in case of an earthquake. 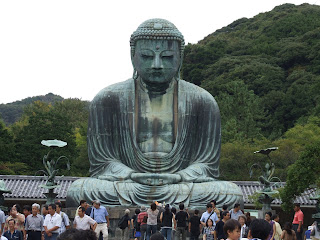 (He's thinking, "PUNY MORTALS I CRUSH YOU." Well, no. Probably not.)

That’s a whole lot of Buddha. A pair of enormous straw sandals were kept aside for him, hanging from a wall, should he ever decide to stretch his legs. He’s been sitting for a while, so it might happen. What amused me even more was what had been left as offerings at the Buddha’s feet; oranges, flowers, and three bottles of coca-cola. 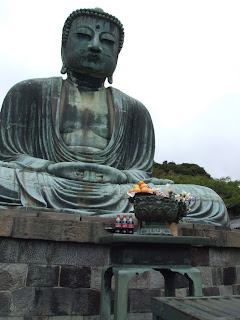 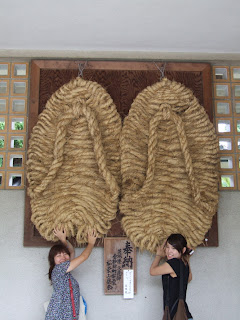 (They didn't know I was using them for perspective, but I used them because I'm a nasty user thing. Personally, I wouldn't touch a giant pair of straw sandals. Feet, you know, they don't smell so nice.)

The statue is also hollow, and for 20 yen I crawled in through his feet and stood inside his belly. Where his coke goes. I don’t know why, but having a giant impressive statue turn out to be hollow feels like not quite right. Especially when there’s windows in his back to let light into his belly. (Inside Kotokuin; that's the fold of his robe.) 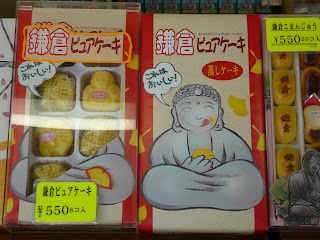 (The Japanese make cakes out of everything. I found these in the souvenir shop at Kotokuin, and they prompted me to completely mangle the quote from LONE WOLF & CUB, "if you meet the buddha, kill eat the buddha.")

I caught the bus back to the station, and wandered around the narrow streets and alleys of the shopping district, now that everything was open. The regional craft of Kamakura is wood carving, which is then lacquered over, usually in the form of trays. They end up with a peculiar red plastic look to them, and being unable to shake the plastic vibe, I decided to give them a miss. I indulged myself some very pretty paper – in no world will I ever need pretty paper – and actually found a sweet shop selling small packages. Most sweet shops sell their wares in large boxes, specifically to be taken home as gifts for friends and relatives. Too much for me. I bought myself an odd semi-tried persimmon sweet, stuffed with…something, and a box of little bunny cakes which I will tear apart violently.

Lunch was harder to hunt down than I had anticipated. There was no shortage of places to eat, and there was no shortage of waiting line going out the door, either. I eventually found one place with a short queue, and had udon noodle soup, vegetable tempura and some fantastic salmon rice with enormous fat salmon roe.

The split between people who pin me as gaijin and people who believe I’m Japanese is pretty much down the middle. It amuses me.

I almost considered going back to my hotel to change after lunch, it was that bloody hot, but decided to check out the hachimangu shrine instead. A good move, as they were just gearing up for the procession out of the shrine and down the main street. Oh, those poor people. The higher-uppers were decked out in full regalia, and even though they were on horses, before the procession had even started they were literally dripping sweat. They didn’t have the worst of it either. There were three ancient and battered portable wooden shrines brought out from the temple, carried on the shoulders of men whose clothes were drenched with sweat. They were exhausted before the march even began. 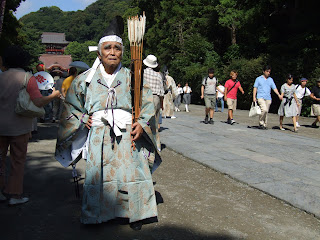 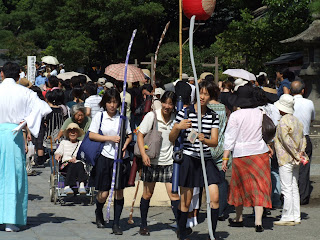 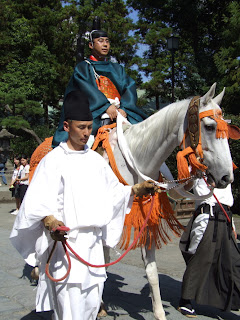 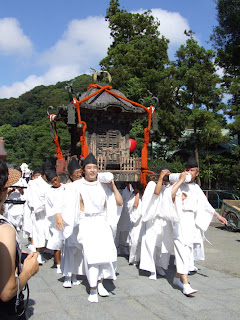 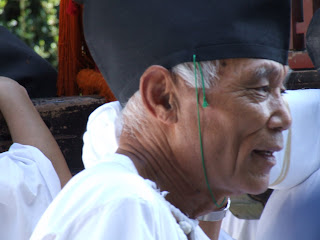 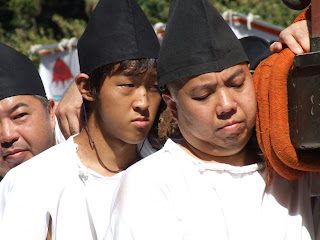 They set off, and I sat down in the shade, people watching. I figured they’d come back eventually, but a long time passed, so I decided to head back to the hotel and cool down. Half way back, yes, they were coming back, so I tromped back to the shrine, and watched those poor men carry the shrines back up the stairs. They were so tired they were listing and wobbling all over the place. No wonder the shrines are a bit battered.

The priests were locked in the temple to perform their rituals, while the crowd outside paid their respects. Then the priests left, the mob of men who had been carrying the shrines were allowed in to wash and change, and that was pretty much it. I staggered back to the hotel, turned the air con down to freezing, and fell in the shower.

My nose is burnt.

It’s probably just the heat and the lack of sleep and maybe the fact that I haven’t eaten much today, but the last two weeks just slammed into me. I had intended to walk around town after dinner, but no, I think I’ll just sit in here, where it’s quiet and cool, and be a blob. Depending on what time the horseback archery starts tomorrow, I might let myself sleep in again.

I would love a conversation in a language I didn’t have to concentrate on.

It’s funny, you know, going back and editing entries written only a couple of weeks ago. I was so daunted by the idea of having to ask for ticket information for the theatre, and eternally grateful for A’s better grasp of the language at the time. Now, I could do that and more without hesitation. It’s funny how quickly language can be absorbed. Admittedly, I’m only absorbing what I need, which is money, ticket, time and direction located, but my vocabulary is growing. Today, I was able to ask if there was a bus to Kotokuin entirely in Japanese, and understand the answer given to me. 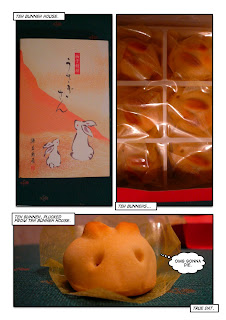