I was wrong. The typhoon had the effect of cleaning out the sky, and it was a beautiful stinking hot sunny day in Tokyo, with a great blue roof over the city. Heat is much easier to handle without humidity.

I figured I’d have a wander around Shinjuku before heading to my hotel. Kabuki-cho is a red light district, packed with all sorts of salacious entertainment. I couldn’t read the signs to get the details, but there was enough pink and half naked pictures around to confirm this. It was thronging with a lunchtime crowd. I think it is going the way of all not so pretty but nevertheless appealing places, and slowly going upmarket as businesses catch on to the potential of the area. A lot of shoe shops, for some reason. I’ve never been much of a shoe person, but by Great Caesar’s Ghost, I could become one here. Tres smexy. Pity I have Godzilla feet. 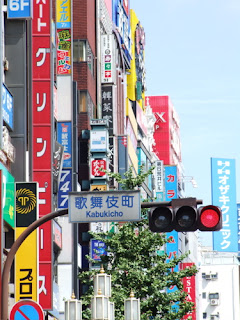 (Can't help imagining how fantastic this place must look at night.)

I found a place doing unagi (eel) for cheaper than usual, and had a lunch set of grilled eel, rice, and soba noodles. I never thought I’d say this, but I am getting really sick of rice. Really. Fucking. Sick. Of. Rice. Japanese food isn’t so different from Chinese food, in that it’s all rice, noodles, and meat. My body cries out for vegetables! I crave fresh fruit! Ai! Ai!

No sooner had I left the restaurant, I was accosted by a funny looking man of some undiscernible older age in a cheap business suit, trying to get me to go eat and drink. I looked at him funny, and he said, “I be your Japanese boyfriend, ne?” Ahahahahahaha! O rly? YAH RLY. You hear stories about such things, but being propositioned made it even funnier. I told him I’d already eaten, and escaped.

Still having a bit of time before check in, I thought I’d try and find the Tokyo Metropolitan Government Offices, which aside from having a great view from the top, also look like the home of Big Brother. It can’t be far, I thought, remembering the LP map, I know it’s on the other side of the station in a straight line. Easy. OH FUCK NO. First, I got lost in Shinjuku station trying to find the west exit. Once escaping the station, I figured I’d just see it, as it’s a big building, and walk towards it. However, it’s a big building surrounded by other big buildings, so I couldn’t see squat. I went around in circles. And some more circles. And finally, found a map, realised how far it was, and admitted defeat. Maybe when I’m back in Tokyo at the end of my trip.

Back to Ikebukuro and Kimi Ryokan, where I dumped my bags, grabbed everything I wanted to mail home, and set out for the Ikebukuro post office, which was a mere two blocks away. I failed to get lost. Go me!

But…it wasn’t a post office. It was some little kiosk thing for sending local letters. OMGWTFLOLBBQ!!11! And here I was, standing with three bags of books, cds, and sundry. Never fear, there was a Kinkos within view, a couple of blocks down. Tally ho!

They wanted to charge me about 20000 yen to express freight it. I don’t know what the exchange rate is, but that’s more than $200AU. The look on my face said it all. He directed me to another post office located on the other side of Ikebukuro station, in the Sunshine 60 building. It was a fair hike, which I really didn’t want to do, but I didn’t want to be lugging this booty around either. Off I went.

Then I realised it was Saturday.

Which, as far as realisations go, is pretty fucking demoralising.

Oh well. Chin up! I had other errands to run, gogogo! Back to the hotel! I didn’t want to go through the station, I don’t remember why. I figured I’d just walk around it. This didn’t work. I went around in circles, and around in circles some more, before ending up back at the station and going through that.

Motherfucking hedgehogs on a stick. Next time I travel, it will be with someone, so that every time I’m all “oh, we can find it, it’s around here somewhere,” they can punch me in the face. I’m pretty sure the lesson will sink in, eventually.

My feet hated me. I kinda hated me too.

At the ryokan, I switched bags, and with all my dirty laundry went hunting for a laundromat. This time I was armed with a map prepared by the hotel staff, and found it without problem. BUT LO! I was short exactly one 10 yen coin to get soap, and my clothes really needed soap. Argh? Argh. I tried to break a 50 yen coin at a bakery on the corner, but the lovely old man who ran the place decided to shout me the 5 yen that would have done it. No! Don’t be kind and generous, old baker man! TAKE MY 5 YEN, PLEASE. I couldn’t convey to him that I needed change, and eventually just pointed at a 10 yen coin and said ‘need’ to his wife, who happily gave me change.

This laundry quest is ridiculous.

With soap and coins for the machine, I did my washing. Sitting, writing post cards, listening the music and generally doing very little unwound me significantly. Dirty washing exists to make you stop, just stop, while travelling. I watched the locals go in and out with their laundry, fussing over machines and soap and fabric softener. I even saw a star, or planet. I suspect it was Venus, as it was bright enough to be seen through Tokyo’s light pollution, and moved very fast.

Now significantly less cranky, I decided that yes, I would head out again that night. The subway took me to Roppongi Hills, a beautiful complex of weird buildings and gardens, which I would have liked to see more of. The goal of my quest there was the Tokyo City View, up 52 floors on the hills in the middle of the city. I’m not usually one for city views, but I think Tokyo has done a good job of wooing me. 1500 yen admission is a bit steep, but I haven’t known any “let’s go up high and look around” attraction to not have a daft admission price.

I think I would have paid twice that, and still been ecstatic. 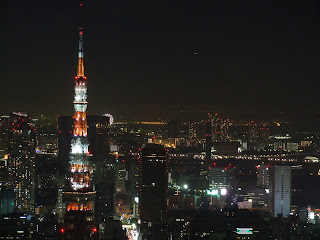 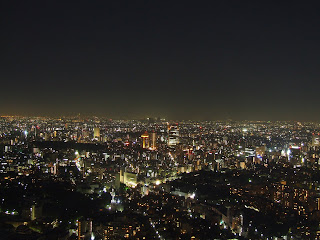 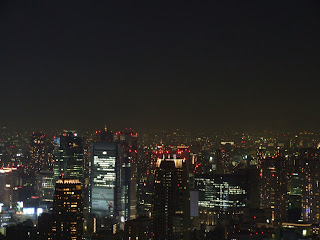 Tokyo is so big. It sounds so obvious, but it is big. Melbourne just doesn’t compare. The lights made me freeze. I couldn’t move, it was glorious. A city is a city is a city, but at night, Tokyo is lights, moving, blinking, dancing lights. The city is alive. The observation deck offered a 360 degree view. From it, I could see Yokohama in the distance, the dark sprawl of the Imperial gardens, the ferris wheels of Disneyland and Obida.

It would have been better if, say, the windows were clean, or they'd turned down the background lights to cut down reflection, but oh well.

I don’t imagine the sight would be nearly as mind-blowing during the day. It is shallow, to be so easily won over by bright lights, isn’t it?

I didn’t get lost going to or from Roppongi Hills. I made it back to the ryokan without further diversions. A very late and entirely tasteless seaweed salad for dinner, and I hit the futon.

Insomnia followed me to Japan. Insomnia is a fucker.

Sunday morning I had to get up early, because Sunday was…SUMO DAY.

The subway dropped me of at Ryogoku, where the sumo stables and arena is located. It’s a giant pyramid with a green roof, very hard to miss, which meant I didn’t get lost again. All good seats were sold out prior, so I bought a general admission ticket for 2100 yen, which is literally the furthest from the arena you can get and still be in the room. 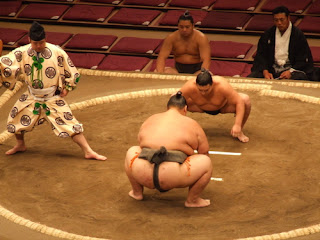 The ring itself is quite small, with officials sitting at each side. This early in the morning, trainees who had not yet attained a rank were wrestling, and few people were around. It’s a surprisingly fast sport, with most bouts being over within 10-15 seconds of starting, although the ritual footstamping and bowing before hand takes up time. They raced through the bouts, which grew addictive. Higher level leagues started wrestling around lunch time, and I ducked out to eat. There is a restaurant at the area, which served ‘chanto’, the vegetable stew that the wrestlers eat. Vegetable stew apparently means seafood and chicken, not that I was complaining. It was served on another little burner on the table. I think that’s cheating a little bit, making you cook it yourself. The extra wait isn’t easy if you’re starving.

Because I’m dumb and just don’t indulge in any spectator sports, I hadn’t brought munchies, so snaffled some Toppa (which is like anti-Pocky, with the chocolate inside the wafer stick), and went back in to watch. 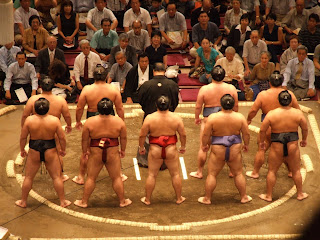 It is dangerous being a sumo official. I lost count of how many times the judges had sweaty wrestles flung out of the ring and into their laps. Great stuff. There was one bout quite early in, a great big bubba facing off against quite a small wrestler, who didn’t have the bulk, but man, was he ripped. Their match was unusual, in that it went for about 7 minutes. Despite much action, neither was able to throw the other out of the ring. Eventually the judges intervened, and their match was granted a time out of sorts. Several matches later, they returned to have at it again. The little guy actually picked the other wrestler up off the ground, quite a feat. Unfortunately, he didn’t win.

It’s amusing how much face slapping is involved in a match. 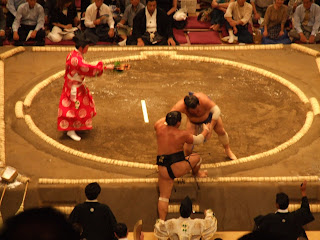 When the top league started, the ritual bowing and footstamping was accompanied by salt throwing, and parading of sponsors. Each bout took longer and longer to start, and the crowd got louder and louder. These matches were generally over in seconds.

With the final match, all seats were full, and the crowd was just about rabid. They took ages to start, with the wrestles posing and facing off. It was a great match, with one throwing the other well out of the ring and into the judges, and the crowd cut sick by throwing the pillows they had been sitting on down at the arena.

It was great fun. Seriously, if you get a chance, do it.

It was about six in the evening when the sumo finished, and I thought to myself, oh, it’s early still, maybe I could go somewh- NO. NO MORE GETTING LOST. Fine, fine.

I was distracted, coming out of Ikebukuro station, by a couple of cake stalls in the Tobu department store. Some mochi would be nice, I thought, and went deeper. And deeper. And deeper. There was a whole floor devote to dessert and cake stores. Holy cow. I found mochi, and because the Japanese don’t eat enough from the sea, fish shaped pancakes with red bean paste, before issuing myself the command “run away!”

The night was spent packing. And insomnia-ing.

Thankfully, the Ikebukuro post office was the real deal, and I was able to post my booty home this morning. My rucksack is considerably lighter now, which is a relief. I caught the train to Shinjuku, and from there the train to Matsumoto. We’re going through the hills now, and it’s lovely. And all this typing is making me train sick.
Posted by Tessa at 12:01 am