WTF was that? This country is water mad!

The map (this hotel is big enough to require a map) indicated that there was a women’s bath just down the corridor from my room, so I investigated. I nearly chickened out. It’s one thing to do the bath ritual when you have a private bathroom to yourself, another when it’s big and public and people are watching every mistake you make.

I found it, opened the door and was greeted with the sight of two absolutely naked women. Stark. The fact that they didn’t care about this made it much easier to do the nekkid thing too. Oddly enough, I have yet to feel fat while surrounded by all these stick-thin women. I feel huge – I think I have a whole lot more hip, tit and shoulder and keep side-swiping things – but not fat.

It was made even less daunting when they left, and I had the whole bath to myself.

Did I say bath? I mean giant heated hot water pool. Again, constantly recycling and refreshing the nice hot water. After a thorough scrubbing, soaping and rinsing on the shower stools, I slipped in.

I shouldn’t say ‘sinful’, as ‘sin’ is a word that comes with religious connotations, but I think it has been drawn far enough into pop culture to mean doing something that should be considered bad. All this luxurious water just slopping around, not being used half the time, that feels like sin. I will make use of every bath I come across in this country, because Australia can’t afford to use water like this. You know, when I was researching for my trip, I thought all the onsen and hot springs sounded a bit dull. Relaxing, yes, but I didn’t grasp the appeal. I repent. I have totally seen the light. I will return to this land just to sit around in the bath all day.

Clean and dazzled and zoned, I slunk out again to hunt down some chow. The rain had stopped, and the air was cool and clean. For a town mostly populated by hotels, there was only one place on the main street still open for dinner, which is peculiar. I’m glad I didn’t settle for bento again. ‘Yamasoba’ (mountain noodles) served zansai soba, which consisted of fresh seasonal mountain vegetables served on soba noodles in hot soup. Vegetables? Vegetables! All my bitchin’ had been answered. I could only identify bamboo shoots, but the rest was mighty tasty, and the noodles were hand made and soft. I nommed (I hereby declare ‘nom’ a verb) most enthusiastically. I might go back tomorrow, as there was another dish there that was mountain mushrooms with noodles, and that sounds divine. 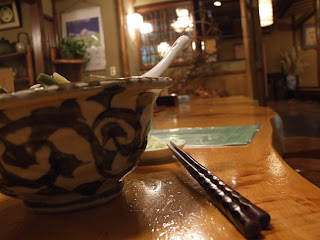 Alas, a terrible and scurrilous task awaited me when I got back: my shoes.

I’d packed a second pair of shoes, because travelling with only one pair is asking for trouble. I think I last wore them in Tokyo, in the rain. I guess they were still wet when I packed them, because when I pulled them out, they were still wet, and rank, and there was mould growing on them.

There is nothing about that sentence that is pleasant.

So, if you don’t want to spend your evening with a bar of soap, a toothbrush, and stinky shoes, don’t pack shoes away when wet.
Posted by Tessa at 9:49 am