While there is only one hour difference between Australia and Japan, I was on nightshift. Not all the flying and running around in foreign countries I did unwound my sleep pattern, and I woke at 4am with a screaming headache, and no painkillers. This made me a sad panda.

After a quick perusal of the program, I decided none of the early panels required my presence, and jumped on the subway to Chinatown. It seems weirdly ironic, visiting Chinatown in Japan when I can get all the Chinese food I want at home, but wow. Melbourne’s Chinatown is a sad sorry affair in comparison. This was several knotty city blocks, strung with lanterns and imposing gateways.

Unfortunately, I went to early (around 10) and nothing was open yet. So, back on the subway to worldcon. At least, that was the plan. For some reason, my Suica card didn’t read properly, so I followed the not particularly well translated and probably misunderstood instructions, and inserted it into the ticket reader. Where it jammed. A station attendant appeared quickly, and opened up the whole machine to get it out, reprogram it, and sent me on my way with a speed that suggests it happens pretty often. Still. Whoops. I’ve broken a piece of Japanese public transport. My bad.

Said public transport, by the way, is like a wet dream. Seriously. The trains are cleaned at their terminations, each time, multiple times a day. The seats aren’t damaged. There is no graffiti. I found myself on one of the reknowned ‘women only’ carriages, and it was very pink.

Also, people who say that the trains are always on time, to the minute, are incorrect. Not that a two minute delay is anything out of the ordinary in any country. The difference being, there are trains every few minutes here, as opposed to one every twenty back home.

The dealers room was a bit of a let down after last year. I was expecting to be tempted by all sorts of things, but most of the vendors were Japanese, stocking Japanese texts. My lack of reading skills makes me a sad panda. Japanese books are beautiful, neat little objects, and I coverts them.

I briefly watched a paint off between Bob Eggleton, Michael Whelan and -------- Kato, which was quite fascinating, noting their different approaches. Sat in on a panel discussing hospitals and health in the future, which planted some interesting ideas. Another on what we love to read out of SF, which was good for recommendations. The Tech Savvy Criminal was my only must for the day, dealing with what it takes to be a criminal mastermind in today’s age of increasingly complicated technology and security. The basics I already knew, just from reading the reports at work (don’t be an idiot seems to cover it), but some great and kooky ideas for general mayhem were thrown out, good stuff to chew on. 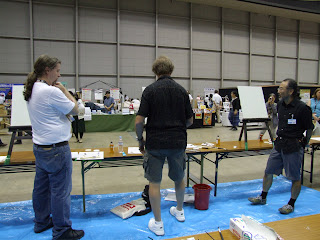 Afterwards, I found A, and we invaded Queen’s Square, a shopping centre across the road from the con. After much umming and ahhing, we dived into a noodle shop, and despite the fact that clearly, neither of us spoke much Japanese, were given a Japanese menu. I just pointed at a random item, and ended up with tempura and cold soba noodles with dipping sauce. I think that was the first real meal I’d had a in a long while. Some caucasians came in after us, and were given an English menu. Doh. I rather like this pattern of adventure food though. I still have very little idea of what it is I’m eating, but it’s amusing. Not to mention 1,000 yen is very decent for dinner.

The success of dinner drove us to hunt of desert, and we found ‘Mochi Cream’, a shop selling traditional mochi with icecream added in the filling. I satisfied my craving for red beans, and it was most, most delicious. Definitely going back to try the chocolate and fruit flavours. 156 yen is also ridiculously cheap for something so yummy. Someone in Melbourne, import this idea! 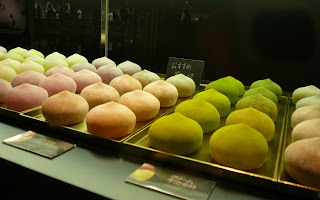 Still having some time to kill before the room parties started, we decided it was time to do the Cosmo Clock, apparently the highest ferris wheel in the world. However, we were distracted on the way by ‘Ice World’, which was advertising -30 degrees C and swimming angels. 500 yen is cheap for curiosity.

The entry featured a giant plastic polar bear in a wood log hut, and this tiny tank, filled with even tinier swimming angels. Seriously, they were about a centimetre big, which is not apparent from the photos outside. They looked exactly like some of the monsters from Skies of Arcadia, and this cracked me up. It was cool in that room. Not too bad though.

Then A opened the door to the next section, and swore like a sailor.

They weren’t kidding about the temperature. After we’d laughed ourselves silly at the outrageousness of it, we realised we were quite literally freezing, and fled. It was great, totally freaking awesome. 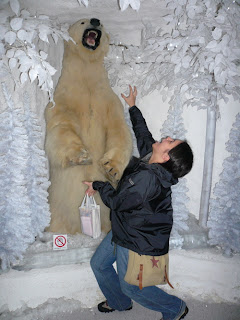 (...the temperature got to my brain. Plus, that bear was threatening my masculinity, which isn't spelt right. Wait. Eek! Is that a badly positioned hand I see there?)

Gigi, I’ll have you know that the Cosmo Clock was fantastic, and slow, and you wouldn’t have had a problem. Also, gorgeous view at night. It’s silly how beautiful coloured lights are. Cities even more so. 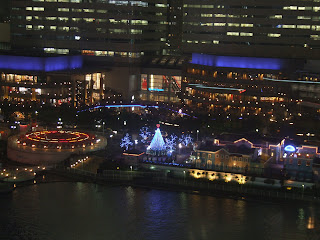 (Minamoto Mirai 21 from the Cosmo Clock)

The party floor turned out to be not quite big enough for the parties it contained. Not just that people had spilled out into the corridor and were sitting in front of the elevators, but that the airconditioning couldn’t handle it. The Aussie bid party was so crowded we were squeezed out. The Kansas party was quiet with good food, and the Seattle party we finally settled, and found some Norwegians who were more than happy to tell us about climbing Fuji-san.

(Again, apologies for the photos. I feel I must be dumb, but I can't find a simple function to resize images anywhere Eddie that doesn't involve some weird exportation from iPhoto that makes them look blocky as. The pictures are a combination of originals and exports. Let me know which ones suck and which ones don't.)
Posted by Tessa at 12:46 pm