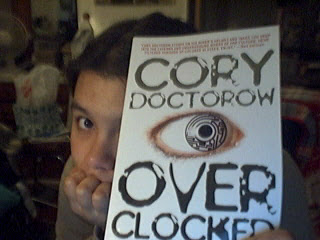 Hehe. Heh. That was cool.

A collection of not-very-short stories (bar one) which concern the future, but not the distant future. The story Anda's Game could quite possibly be present tense, happening right now, somewhere in the many MMORPGs out there. Shifting the sense of 'possible but not in my lifetime' to 'this could happen far too soon' gives the collection a marvellous frisson. Just as we watch disaster films and true crime shows, a sense of impending doom is disgustingly addictive. There isn't much dignity to be found in the dooms offered here.

When Sysadmins Ruled the Earth made me laugh and groan to begin with; I remember being woken up at obscure hours due to living with an oncall sysadmin. Thankfully, the world didn't end whenever I was trying to get back to sleep. This story seemed to wibble a bit, just as the characters lost their own sense of purpose or direction, but it remains a great piece, and delightfully chewy stuff for the brain.

Another favourite, I, Row-Boat had me giggling for the whole fifty pages. In a future where the majority of the human race consists not of walking meatbags, but uploaded consciousnessesseses, and conscious sentient intelligent robots exercise free will on the Earth, someone has taken it upon themselves to start awakening and connecting...pretty much everything, from the sound of it. Robbie the Rowboat, whose days normally consist of shuttling out human shells for day dives on the Great Barrier Reef, has to deal with one of these newly awakened consciousnesesesessses, namely, a reef.

The reef is kinda pissy. It is hiiii-larious, in that sad, grieving sort of way. I can't help thinking that in such a world, there are no humans. The homo tree we are a part of is largely defined by physical characteristics; if there is no physical, then is there a species? Does it matter anymore?

Also had a "HEY! I KNOW HER!" moment when Kate's full name was revealed. After which I was unable to see the character the same way again, but oh well.

Favourite, absolutely favourite, is the final story, After the Siege.

...I've deleted about five stalled paragraphs attempting to summarise this story, and how deep it went. I don't think I can do it justice. On the surface, it follows Valentine, a girl becoming a woman whose city is devastated and starved and ground to dust by war, as is her home, her family, everything she knows. They starve. They die. They lose. Yet in the city is one who is well fed, well dressed, has the cure to all the things that kill those who aren't dying on the front lines. Valentine finds that person, and doesn't accept their reasons and excuses, and eventually forces them to stop the slaughter, instead of watching.

The author notes mention AIDS treatment and copyright as a comparison. It is true. This story alone is enough reason to buy the book. It is well bloody brilliant.

There are others I haven't mentioned, all very much tasty and scrumptions, but these three stood out. Most excellent.

Verdict: Totally worth your time and money. The book is available for download under a CC licence, but seriously, just fork out the money and buy it.
Posted by Tessa at 9:00 am