There’s a line from Fight Club that I’m going to misquote. Something along the lines of, “if you wake up in another place, in another time, do you wake up a different person?” It’s a concept I like. Alas, every time I test the theory, I fail. If I’m a different person, it’s on such a macroscopic scale, it’s irrelevant. I mean, I could have at least woken up, I don’t know, taller. Smaller boobs. Less inclination to swear.

But I failed to get plane sick again, and maybe that’s enough of a difference. You know what this means, right? At last, I can take over the world. I couldn’t before, because no conquering emperor who disembarks their private jet and chunders all over the tarmac is going to be taken seriously. Nothing can stop me now.

The leg from Singapore to Tokyo was just as eventless. I slept. And slept. And missed the midnight snack but didn’t care, munged some jelly beans, and slept, and slept, and finally, yes, I was awake for breakfast. Eggs and ham or Japanese? Why wait to get to Japan? So I started my adventure feeding on the plane, and had salmon and rice for breakfast. There was some completely unidentifiable thing in with the vegetables; it was gelatinous, multi-coloured, star-shaped, and stuck to the plate. Nan desu ka? I asked myself, and even more importantly (which I shall have to find the Japanese phrase for), can you eat it? I ate it. It was entirely uninteresting. Thus ends my adventures with aeroplane food.

Narita Airport shocked me. What is this, a second major international airport that isn’t a trash heap of over-used portable buildings? It was clean! Repaired! The air-conditioning in the immigration hall worked! The immigration officer smiled! The customs official flirted! LAX can eat my shorts.

And just like that, I was in the country.

Maybe it was the lack of sickness, or the addition of sleep, but I didn’t feel intimidated by this, which surprised me. At no point in the lead up to this did I do my “oh fuck no what on earth am I doing?” doubt/fear attack. I was expecting it to hit me once I was on the ground. But no, I’m here. I’m just here, and it’s not a huge scary thing, it just is. Is this what being a grown up feels like?

Tickets for the Narita Express to Yokohama were ridiculously easy to buy, and the station easy to find. I was mildly thrown by the fact that not just seats were allocated, but carriages (as the train splits at Tokyo station and goes to alternate destinations), but a fumbled Japanese question to a policeman who spoke perfect English cleared that.

The train left the under ground, and I watched suburban Japan go by. The hour and a half trip to Yokohama went ridiculously fast. What vegetation there was, was green, astonishingly overwhelmingly green, and what housing there was, was tight, compact. Against a sky so full of humidity it was grey, it reminded me of Malaysia. I gawked out the window at all the ordinary differences.

And got train sick. 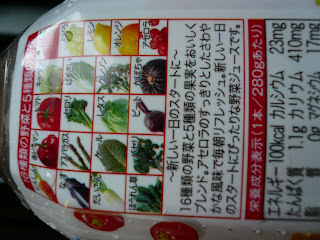 (The juice I bought from the trolley lady had all that in it. ALL. THAT. It tasted like apple juice to me.)

Yokohama station was surprisingly skungy, in that used hard and long and every single day sort of way. Me and my rucksack and backpack stumbled off, and set off on a great quest – to transfer to another line. Which would have been much easier if I’d done the intelligent and organised thing, and written down the line and station I needed. So I molested the Japanese language again, found my platform, ad libbed my way through the ticket buying process (I have a Suica card, and the penguin is very cute), and lumbered onto the next train going in the right direction. Trains, they’re the same in every country. They only run where the rails run. Comforting fact; the English names of the stations next on the line in both directions are written on the station signs.

One stop later, one more station escaped from, and I set off on the quest part 2 – find hotel.

The map I had wasn’t in English, but you don’t need language for maps. A sense of direction, distance, and what size streets were shown/not shown helps though. I sort of maybe kinda walked around in circles, in these amazing dense city blocks, and only found the hotel by accident. It was humid as all hell, and my shoulders didn't appreciate lugging my rucksack around all that time.

It was too early for check in, so I set off to find Pacifico Yokohama, home of Worldcon. This time, I didn’t even need a sense of direction, as it’s big and kind of hard to miss. But, well, me so dumb, I decided to bypass some of the busier roads by cutting through the subway, got completely turned around underground, and ended up going in circles again. Won’t be repeating that. I still managed to pick the wrong roads and get funnelled by bridges into going in the wrong direction, and ended up in a food court where I bought more unidentifiable food (something I thought was melon bread, but I don’t think it is, and a mystery bun that turned out to have pickled sea weed and greens with chilli, mmmm!), before finally seeing some very not-Japanese people who gave off a distinct nerd vibe, and followed them.

Who let me loose in a foreign land?

Before I’d even made it to registration, I found A, of Clarion South notoriety. Yay! And before we’d even left the building, we found Ellen Datlow. Yay! It was great to find a familiar face, and have someone to go “wow!” with. 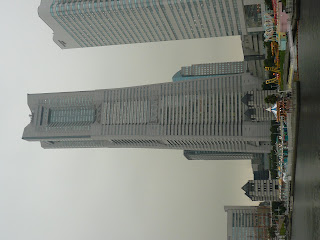 (The Yokohama Landmark Tower, which as A pointed out, looks rather like Orthanc.)

We attended one panel, debating the Sapir-Whorf Hypothesis, that language influences/controls how you think, and that the structures and concepts of a language alter your thought processes. It was fascinating, and I’m so tired I can’t remember any of it. I had to bid A goodbye, and stumble back to the hotel. A long hot bath hasn’t quite worked the ache out of my shoulders.

I’m eating a very traditional Japanese dinner at my room desk; a bento set bought from 7-11. I’ve only been able to identify half of what I’ve put in my mouth. It’s not exactly a learning experience, but there’s no lack of fun in mystery food. 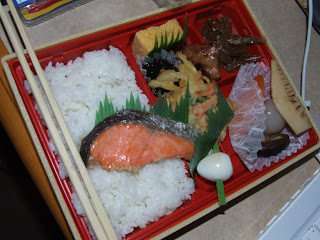 I was half considering venturing out tonight, to conquer the ferris wheel, but, ugh. Sleep.

(Post backdated to time of writing. More later, gots to run. Apologise for the uber large and sideways images, in kind of a rush.)
Posted by Tessa at 9:22 am