I stopped writing up the books I've read, for reasons absolutely saturated in self-pity and horseshit. But the write ups are actually the best way of counting up how much I've read in a year, so, sally forth, as they say. 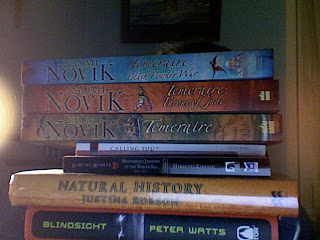 Picture might look funny; the camera on Eddie flips images, and I can't hold books steady. Even with both hands. Fail.

Blindsight - Peter Watts
First ran into this book at worldcon last year, with that most scrumptious woman Nadini. A couple of months later, I picked it up while in Sydney. Many months later, I read it, and loved it. Such a lonely, unfriendly, isolating book. I wasn't in a great headspace at the time (wow, like that's new), and a story set in the emptiness and hostility of space felt entirely right. A crew of specialised freaks is sent out to investigate possible alien contact, which turns out to be this giant thing; Rorschach. In the middle of everything that is threatening and unknown, the question is asked, 'what is self-awareness good for?' and oh, what a good question. I obsess over it still, I chew it over between turning the light out and falling asleep, while on the train, while not working at work. None of the answers I come up with a nice ones. That's okay. Neither was the book. There is a very good reason this is nomianted for a Hugo: it is roxxor.

Natural History - Justina Robson
I've had this book for ages. I don't entirely remember where or when I bought it. But I wasn't done with stories-set-in-the-vast-emptiness-of-space books, so I munched on it. It wasn't quite what I wanted; this space lacked the isolation I was sniffing for, as each character was connected to the rest of the known universe by intrawebs. The characters were nicer, in fact Zephyr was down right likeable. It was largely a story of trascendence, which wasn't as tightly written as I expected. Possibly I was distracted by story elements that were too similar to some in my own WIP. That Westerfeld guy informed that the reason people keep publishing books containing my ideas is that I write too slowly. I prefer to think I'm derivative, like the best of the wannabe writers out there. It was a good read, but not the right book to follow the one before.

Vampire Hunter D: Mysterous Journey to the North Sea (Part One) - Hideyuki Kikuchi
It's D. Doing his thang.
Actually, this book was more interesting than the previous ones, as the heroin isn't some perfectly beautiful little waif. She's quite plain and practical, and not a brat either. You go, girl. We'll see if it lasts into the next volume.

Calling You - Otsu-ichi
Three novellas, each one stark and soft and raw and tear-inducing. The first was a girl who had an imaginary phone in her head, which is far more beautiful than it sounds. The second is a boy who takes the injuries of others onto himself, which isn't a new idea, but is wonderfully drawn out. The third is a sad, sad song of flowers. Each story has a touch of wonder to it, and each deals with loneliness quietly, quietly. This isn't a big read. I ate it in an hour. Investigate. It will surprise you.

Temeraire: His Majesty's Dragon, Throne of Jade, Black Powder War - Naomi Novik
I've had these books for ages. A combination of Justine nagging me and actually having a second Hugo nominated book on my shelves prompted me to hurry up and read them. The first was a delight; like reading the Pern books again, I wanted want my own dragon; like discovering Hornblower again, I want my own square-rigger. What ho! A good frolic in the Napoleonic Wars with big roarming beasties, who could ask for more? Not I. The second book had less shine, but in itself was quite interesting concerning the politics of dragons. The third book felt very much like filler; our heroes must get back from China to England somehow, in order for the rest of the story unfold, and the final defeat of Napoleon to take place. Black Powder War is that getting from A to B. Fun books, yes indeed.

I'm not really a writer. And I'm a lazy reader. All this is just life spent pointlessly.
Posted by Tessa at 11:30 am