Japan Sinks - Sakyo Komatsu (or is that Komatsu Sakyo?) 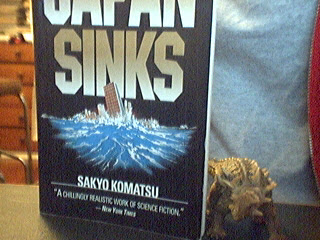 Morris read this and said, "oh yeah, shit like this happened when the dinosaurs were wiped out, YOU'RE SCREWED." I'm inclined to agree with him, from the safety of Australia.

You'll never believe where I found this book. In a second hand book shop in Gardner, the small two saloon town at the entrance of Yellowstone while I was doing my trek last year. It was one of those moments of "o rly? YA RLY!" I wasn't looking for it, and yet there it was.

You can't really go past the title as far as story summaries go. It's about Japan, which sinks into the ocean. YA RLY. Well, no. It's about looking at the possibility of something that catastrophic occurring, and what to do about it. Would you believe it, given all the facts? I can't say I would. Say you accept the inevitability, what then? How do you prepare for the physical loss of a nation, the displacement of millions and millions of people?

How do you deal with the disappearance of your entire civilisation?

That is what the book is really about. It's crushing and devastating. There isn't an enemy to be angry at, it is just the Earth, doing its thing. Unstoppable continental drift, which won't be intimidated or reasoned with. It comes down to getting the population off the islands before its too late.

Australia makes an embarassing appearance, with the Prime Minister being approached by the Japanese ambassador, requesting the immigration of five million japanese workers. About a third of the Australian population at the time, a time which comes shortly after the abolition of the White Australia Policy. I cringed.

One scene that stood out vividly in my mind was a collection of international diplomats leaving a conference to check out the TV, a broadcast of the beginning of Japan's destruction on the tube, and of one man looking back to see the Japanese ambassador remove his glasses, and wipe his eyes, before putting them back on.

Even abridged as it is, this book was a punch in the guts.

Verdict: Depressing and upseting and very, very powerful.
Posted by Tessa at 1:41 am