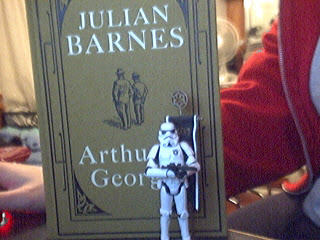 Rav Deeves (that's his name, serious, it was on the box) is all "eh, whatever," about this book. I wouldn't put it like that, but the sentiment is the same.

I first read Barnes in university, and there was much love involved. For years, I'd intended to eat more of his books, but only now got around to it, and I have to confess that the physical beauty of the book was a fair chunk of the motivation. Cloth-bound books are just nice to stroke. No, stroking books is not weird. Shut up. Stop looking at me like that.

This book, well, it didn't trigger the big love boom I was hoping. It is very well written, and an intriguing look at the vastly different lives of Arthur (that's Sir Arthur Conan Doyle to you) and George, who probably would have never met had it not been for whim. Life, you know, she's a whimsical creature. But meet they do, and Arthur is not the gallant knight he wishes to be, although he almost convinces the reader otherwise. George is not a helpless victim of hate, although it is tempting to paint him so.

The England of fiction remains a strange soggy place, and I find that the mental landscape it creates in my head tends to be dreary, bleak, and colourless, and as much as I wanted to enjoy the book, that sort of saturation is a downer.

I guess I'm not academic or intellectual enough, because I reached the end, and after their lives were spent and all had failed and been achieved, I thought to myself, "yes, and?" Perhaps the fact that it reads in a somewhat autobiographical manner brought that on - lives don't have a point, they just happen, and then they end. The last three lines;

and in fact the last scene of Arthur's funeral knocked down the interesting structure of thought I'd built on this story. Perhaps that is the point. What you want to know, what you think you know, all of these things are-

Verdict: Eh. A lot of people loved it, but it didn't rock my world.
Posted by Tessa at 1:16 am