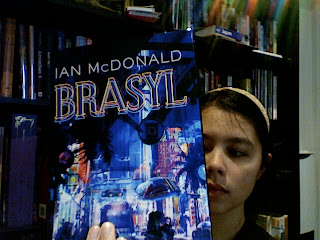 -and then this book spanned hours at the Kuala Lumpur International Airport, and the first few nights in my new cubby house (every now and then I call it 'mah crib' and then can't stop laughing), and is generally associated with turbulence. It was just a random grab in a bookshop in Malaysia. Possibly, I should have read a couple of pages and chosen something with less portugese. I'm dumb, and didn't realise there was a glossary in the back. Imagine me exhausted and stressed and sitting in the departures lounge, as you do, attempting to read when every other word was foreign and my figuring-things-out-based-on-context muscle putting up a fight.

The book is split into three time lines; one in the very recent past, one in the very distant past, and the last in the not too far off future. (Unfortunately I left my copy at home, and I'm at true home now, so I'm going from fuzzy memory here.) Near past follows Marcelina, an amusing TV producer having a horrible time/great time/horrible time as quantum, in general, inteferes with and takes over her life in unusual and frightening ways. Distant past follows Luis Quinn, a Jesuit sent to Brazil where everything is different, and charged with a task most difficult, made even more difficult by quantum, again, intefering. Edson, a hilarious dude of whatever trade he chooses, brings quantum inteference on himself by pursuing a quantumerino (I'm sure I'm spelling that wrong), even when his chosen girl is killed, and one of her parallel universe versions appears.

Despite the years, centuries between them, the stories bleed into each other beautifully, until battles in the jungle centuries before have more than direct effect on the fate of high-flying quantum assassins in the future. It is most spectacularly, intricately, beautifully written, and I adored it. It isn't, as that sloppy summary suggests, about quantum anything. Quantum, while being the driving narrative force, very much plays second fiddle to Brazil itself. There is a distinct lack of brain-bending quantum theory, and a lot of fabulous, fascinating pieces of the nation.

My only nitpick (and it is very much a nitpick) was style-related; I felt that, given there were three very distinct storylines being rolled out, each should have had its own distinct voice, which wasn't the case. There were instances, sentences, where the structure was distinct enough to stand out, and I'd see such sentences in every timeline, and it pulled me out of the story. I felt then, I was reading McDonald's voice, not the story's, if that makes sense. Which it doesn't. Him being the writer and all. ANYWAY.

I hope there is never such a thing as the Angels of Perpetual Surveillance.

I suspect there will be.

Verdict: This isn't being touted as one of the best books of the year for nothing. Seriously, check it out. Incredibly well crafted, frabjous characters, and the frogs- I didn't know that about frogs. Is it true? I want it to be true, so I won't check to see if it isn't.
Posted by Tessa at 7:06 am