The Surgeon’s Tale and Other Stories – Cat Rambo & Jeff VanderMeer 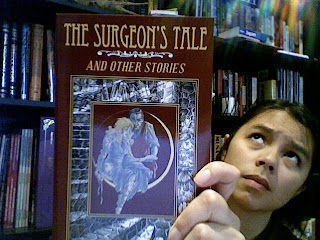 One night, I harp on about the little story lost. The next night, I read this, and lo! Little story lost has grown up, grown out, got some kickass threads and sweet boots and is out on the town turning heads. No, really. “Hey,” I said, suspicions slowly growing, “I know this story…” I’m glad to see it got out into the world. Maybe it'll even be read out loud.

‘The Surgeon’s Tale’ is a story of a drunken and mostly failed attempt to raise someone from the dead, and the misplaced love that grows from it. It is a sad, confused, often forlorn story, full of regrets that he doesn’t regret, and mistakes that maybe weren’t mistakes. Creepy, but softly so. Beautifully written, definitely the crowning piece of the collection.

Accompanying it are a handful of stories by Rambo and VanderMeer, each with a lovely fairytale flavour. I was particularly fond of ‘The Dead Girl’s Wedding March’ and ‘The Key Decides Its Destiny’, both by Rambo, both having that touch of the absurd I’m partial to, both reckless in their conclusion. To hell with the world. After five stories that bled together sweetly, ‘The Strange Case of the Lovecraft Café’ felt out of place in tone and content, but was an amusing note to end on.

On the last page is a little poem, which sums up the collection neatly. I’m particularly fond of the last two lines;

Verdict: This collection may contain traces of giant cats, romantic rats, dead strangers, strange deaths, and you know, good readings in general. Consume at your own risk.
Posted by Tessa at 1:57 am