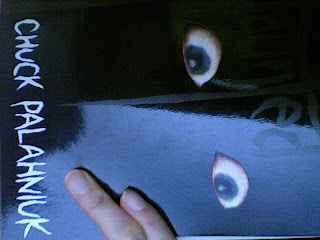 In the interests of fair disclosure, I shall state right now and up front that I love Palanhiuk's books, that sort of rabid adoration that is a little embarassing, and if your views on his writing don't happen to coincide with mine, then clearly you're some sort of monobrow ignoramus with smelly fingernails.

Still, I think he went off the deep end with this one.

The book revolves around a group of people on a "writer's retreat", who've locked themselves away from the world for 3 months, to write their magnum opussesses. Instead, they work on creating a story by putting themselves through the worst things they can imagine. They kill, maim and eat each other, all to make the story, their story, better.

Fortunately, that's only a third of the book. A chapter of real time. A poem about each character, under the spotlight, and a story, told by each character. Maybe about themselves. Maybe not.

The stories are the strong point. They're universally goddamn fucking awful, in new and spectacularly fucked up ways. This isn't a book I ate in one night, although I tried. There was too much oh-gross-oh-sick-oh-I-just-overloaded-on-scum-of-the-earth for any longhaul reading. Fantastically horrible. Hard to keep away from, hard to stay with.

The universally present narrator began to bug me after a while. Not third person, no he/she, but 'we'. I didn't particularly want to be grouped in that 'we'.

Last night, I forced myself in for a long haul, and I finished it, and the grand finale was what I expected, and something of a let down. I'd reached my saturation point of despicableness. There wasn't any further to go - just sit around, making our own stories hard to keep away from, hard to stay with.

The moral, of every single one of his books, is that we're all fucked.

Verdict: If you haven't read Palahniuk before, don't start here. Start with Fight Club or Choke. If you have read him before, well, complete the collection. The short stories are great, but you're not missing out on the rest.
Posted by Tessa at 2:08 am