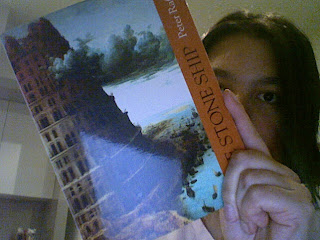 It’s been a couple of months since I finished this. It kept me company late at night while I was entertaining a mild alcoholic buzz and the blatant absurdism of the world was reflected within the story in a style which quite pleased my palate.

Having just lost his wife, Shipton has retreated to the Isle of Goats to kill himself. He’s not very good at this. At one not-quite attempt at suicide, he’s interrupted by a ghost, who claims to have saved his life, and in return demands a favour. Having nothing else to live for, Shipton obliges the ghost, and so ventures into the University, where everything is just. Fucking. Mad.

I was won over on the first page. Raftos has perfectly captured that state of despair in which one no longer wants to live, yet does not want to die. That state where being yourself is the worst thing you can conceive, and all you want to do is go somewhere, do something, be someone else. Anything else. A state of extraordinary vulnerability and apathy. The ghost’s manipulation of Shipton is a work of art, even as he sabotages himself. Giving Shipton a purpose – fulfilling the unspecified favour required – gives him the strength to continue on, and within the bounds of the mad, senseless, entirely unpredictable world of the University a battle of wills is fought between them, until nothing makes sense anymore, which, in a way, makes the most sense of all.

It was exactly the right book, read at exactly the right time. I loved it, and came out the end bemused and satisfied and wishing there was more to be had. It wasn’t without its flaws – the undercreature never really gelled for me, and insane blood-crazed librarians are on the threshold of becoming cliché – but overall was exceptionally well crafted. Raftos is sparse with his prose and precise with his detail. A great tight little book.

Verdict: Well worth your time. Possibly you need to have a taste for humour that is ludicrous in its deadpan delivery, but who can’t find the appeal in the abusrd?
Posted by Tessa at 6:54 am