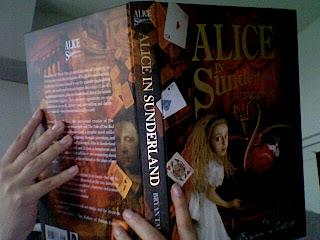 I finished reading this before I went to Japan. Yah. Back in August. I’m a bad bad person.

Normally I don’t write up the comics I read, simply because I go through that many, that quickly, I’d end up writing about nothing else. Alice In Sunderland is an exception to that, as it followed prose reading patterns.

You’ll notice that it’s a fucking enormous book. Wrist-snapping, ribcage-cracking enormous. I have coffee table books that are less dangerous to pick up. Thus, it was only read in bed, or at the dinner table – anywhere that I didn’t have to support it.

It’s also dense. It’s a the singularity of graphic novels. Every page is a riot of colour, text and information thick and fast. This isn’t a comic you can rip through in an afternoon, toss back on the shelf and move on. It demands your attention and concentration, as the rabbit/pilgrim/Talbot takes you on a grand tumble through history, legend and the little lives of Sunderland.

While this exegesis, of sorts, is framed as being an exploration of the origins of Carroll’s Alice, I was more interested in reading it as a general history of a very small area. Under Talbot’s brush and research, Sunderland becomes an incredible town saturated in fascinating tales and details and a long history. It is tempting to, when the rabbit/pilgrim/Talbot reveals something new on every page, believe that Sunderland is the source of the whole damn world, let alone Alice.

Do you remember that chapter in From Hell, in which Gull has his poor, poor driver take him about town on a seemingly rambling tour of the various temples and buildings and religious sites? The information is a giant plate of spaghetti, and you work your way through it, enjoying the jumble and trusting that at the end, all will be revealed.

Alice In Sunderland is 318 pages of information spaghetti. It’s lush and rich and overwhelming, and a fabulous ride. However, the final climax didn’t satisfy me.

The weight of all the preceding pages rather outweighs that.