Baltimore, or, The Steadfast Tin Soldier and the Vampire – Mike Mignola and Christopher Golden 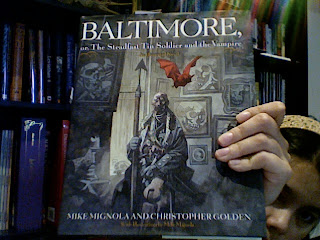 Impulse buy. Weakness for illustrated novels, especially ones that are sealed thus I have no way of knowing if they’re interesting enough to buy, so I buy them to find out.

As you can tell from the subtitle, it’s about a warrior and a vampire, one hunting the other through the first World War and into the years beyond. Baltimore ‘woke’ one on a battlefield, and said vampire was a bit pissed about having his face cut in half, and did his thing. Namely, making a rash of vampires to plague mankind, in a sort of ‘serves you right’ manner. He goes after Baltimore’s family and wife, which ends badly, and galvanises Baltimore into some sort of god-chosen warrior who stumps all over Europe kicking butt and taking names, looking for his scarred vampire. Only the book unfolds with a bit more class than this summary would imply.

Actually, that isn’t what the book is about at all. That’s just want the book wants you to think it is about. What it’s really about, is ghost stories.

Three acquaintances of Baltimore’s have been summoned to attend a miserably pub in a miserable town at a certain time on a certain day – only Baltimore himself doesn’t arrive. They fill their time, waiting for him, by relating to each other their encounters of Baltimore, and the events in their lives that made him choose them over all others. They tell each other stories, ghost stories, as the light fades and the pub empties, and yes, I was utterly and totally creeped out. I started to get the willies, which meant I had to keep reading as an excuse to keep the light on, which meant I freaked out even more. IT IS A VICIOUS CYCLE.

My favourite, the story that made me check under the bed (oh yes I did) and making stupid delighted little “eeee!” noises, starts on page 162, with Childress revealing a rather horrifying event of his youth, taking place in Chile, in the mountains. It did not contain that flavour of the familiar, of having heard an echo of this story over torch light, under covers, it was entirely unknown, and so very addictive. The end, that final revelation, shocked me, and I loved it.

The rest of the book, all Baltimore’s parading about, didn’t even compare. The hero of the story, the title of the story itself, he fails to be interesting and borders on cliché. Behind him he drags pieces of the Little Tin Soldier fairytale, a theme that is nothing other than forced and clunky. It never gelled, and when he pulled his tin heart from his chest, I snorted. It was most unbecoming of me.

Pick it up wanting some most delicious ghost stories, and you just might get what you want.

Verdict: I’ve seen better writing, and deeper characters, and less clichéd warrior vs demon stories, but the ghost stories, my dear, they hit the spot. Yes, I really did check under my bed. Mostly because I was pretty sure there was nothing under there. If I’d suspected otherwise, I wouldn’t have checked, I’d have taken a flying leap off the end and bolted out the door screaming. Otherwise, meh.
Posted by Tessa at 1:40 am