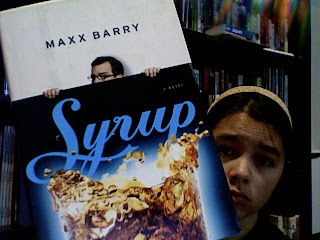 ‘cause after Baltimore, I needed a fluffy pink unicorn chaser. I settled for this.

I bought this a year ago, in a second hand bookstore in Gardiner at the entrance to Yellowstone, and it banged around in my rucksack, then sailed home in a box, and sat on my shelves waiting for when I needed a funny book. (I ration out my funny books. There don’t appear to be that many. I cannot decide if this is sad or odd.) At that point, Syrup wasn’t available in Australia; now it’s everywhere.

The tip of the iceberg: Scat has a great idea, a million dollar idea, for a new brand of cola. Ideas are easy, making them work isn’t. With the aid of his housemate, Sneaky Pete, he gets an in at Coke, pitching his idea to the New Products Manager, 6. Thus begins an enormous tug of war over trademarks, money, power, careers and anything else you can imagine. Fukk, the new cola, is small fry compared to what follows. I’d love to go on, (and on, and on), but sharn’t. You need to read this book completely blank, so that on every other page you can burst out laughing while thinking “DID THEY JUST DO THAT NO WAI” yes, even in capital letters.

There is a commonality between it and Company, mostly in the relationship between Mr Protag and Ms Femme Fatale. Apparently, women make men really stupid. Is this true? No wai! Methinks most men are pretty good at making themselves look stupid entirely on their own. Also, women are apparently entirely incomprehensible, and sharks. Ruthless, treacherous, backstabbing, manipulative, hilarious sharks. 6 is my new favourite female character ever. I have to work on my levelling my shark skills. Clearly, I’m letting the fairer sex down.

It shows its age a little, the risk you take when you name drop celebrities and brands like it’s autumn, but at the heart is…a whacky ball of ridiculousness that I have no trouble believing in. And ridiculousness is timeless.

Verdict: AWESOMESAUCE! I had to take breaks from this book, I was giggling too much. Faaaaabulous. I mean, just look at the back cover! 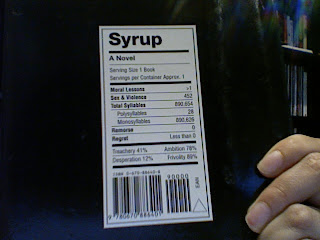 I'm not sure I believe the monosyllable count. The rest is pretty spot on.
Posted by Tessa at 1:44 am