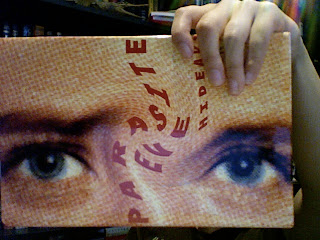 I ate this in one night.

I didn’t mean to, there just didn’t seem to be a good place to pause. All the chapters ended on cliffhangers. AND I HAVE NO WILL POWER.

How on earth to summarise this?

Toshiaki Nagashima’s wife, Kiyomi, dies in a car accident. It’s a standard fare death when viewed from the outside, but we, lucky readers we are, view it from the inside, and it’s strange in there. Toshiaki, being mad with grief and a pharmacist, has her kidneys donated and takes her liver for himself, to preserve some cells, to keep some part of her alive.

In any situation, that isn’t healthy behaviour.

Her liver cells are alive, not in the cellular sense, but in the sentient and coherent life form sense. They have willpower, desire and intent. They are not they, but She, unknown and quite frightening. Dividing and multiplying is child’s play compared to what this baby can do.

She has lived in Kiyomi for some time, gradually taking over her body, down to the cells, shaping and moulding it, directing Kiyomi in her life, until at last, She can take control.

She wants Toshiaki. Among other things.

Kiyomi’s fear, knowing her body is not entirely hers, is contagious.

It’s beautifully balanced. The slide from every day life and every day beliefs is gradual and perfectly measured, each new shock, a little worse than the last, immaculately timed, until you expect monstrosities, you wait for monstrosities, you cringe and hide and don’t want to look because the monster is about to appear but you keep looking none the less. The monster doesn’t disappoint. She’s ghastly.

Some of the passages are quite dry; explanations of chemical processing that is a bit too rote and step by step to hold my interest, a side effect of the fact that Hideaki knows what he’s talking about. He’s better in relating his theories about mitochondria in dialogue, which is easy to swallow. Grillo’s translation isn’t flash, but is invisible.

There was a moment towards the end, where I thought that oh, this was just another ‘women are the root of all evil’ story, but in hindsight that’s the cheap opinion. There’s a lot of interesting stuff to chew over here, and it doesn’t take much digging at all. It’s easy to be distracted by Her single-minded and primordial emotions.

Well. There’s still a little demonising going on, if only because She is damn fucking scary. That’s some hell good monster.

Verdict: This book surprised me. I know there’s a Parasite Eve game out there, somewhere, so I wasn’t expecting this fascinating, complicated and impressively well-drawn story at all. It’s a very human story, behind all the muck and horror, and well worth checking out.
No idea how they got a game out of it though. Seriously, how would that work? Get points for operating the centrifuge correctly?
Posted by Tessa at 2:03 am